The Bird with Diamond Resale Value

Blue Underground has a pretty impressive catalog of cult films available in High Definition, and it so happens that one of their first was Dario Argento's first foray into the director's chair in THE BIRD WITH CRYSTAL PLUMAGE/ L'uccello dalle piume di cristallo. The DVD came out in October of 2005, the Blu-ray in Febuary 2009. Evidently, the licensing contract has already expired, which has pushed this much beloved special edition title into the Out Of Print life-cycle. Not a big deal if you were, you know, smart and actually bought it instead of putting it off for two years like a certain crazed Argento-love-hating somebody... by which I mean a somebody named Kentai.

'Cause this fucker just went from being regularly sold at $15 and under to being QUITE EXPENSIVE. 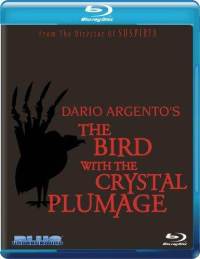 Now worth its' weight in daggers.
Granted, Amazon sellers are sort of like those cocky, stupid guys you see wearing sunglasses after dark with no shirt on under their jacket that are like "Aw yea, girl you KNOW you want dis". You really don't, ladies. And if you do, you deserve your herpes. Yes, the option's there, but if you take your time and play the eBay waiting game you might find somebody who doesn't know that an open copy is worth double-retail in the market and walk away with a copy at a totally fair price.

Much as it's tempting to be plunged into the endless pit of non-buyers' regret, Arrow Video has already announced plans for their own special edition Blu-ray for release in March. Knowing Arrow, even if they don't port the rather impressive bevy of relevant interviews they'll match, or surpass whatever Blue Underground came up with on their own... the transfer, however, may not be ideal, and that is one area where Blue Underground really excelled on this release. They didn't include the original mono mix (in English or otherwise), but otherwise it's a top-notch presentation, and even if I hate the cover art I'll regret this funky looking case not standing on my shelf next to Deep Red... which, ironically enough, I'm waiting for on the off chance that Blue Underground wipes the floor with Arrow's iffy looking compression. Clearly I should snap up whichever version I want the second I see screenshots, since otherwise I might be out of luck anyway.

I'm going to keep my fingers crossed and see if a Newbury Comics or FYE still has a copy kicking around. I'm also going to make it a point to pick up any and all BU titles I *heart* but have so far been too cheap to indulge in. It's hard to say if titles like Two Evil Eyes and Fire & Ice will be in print for another year or another week, but let this be a grim reminder to us all that if you want something, being cheap and/or lazy isn't always the best way to get it.
at 10:13 AM