Holy crap, the R1 subtitles for SPRIGGAN are an OCR mess... seriously, check this shit out:

Methinks ADV used that fugly font just to prevent assholes like me from using their translations on a future subtitle-free Blu-ray. 'Cause they were totally that paranoid and forward-thinking in 2001, right? So I'm pecking away at fixing up the script, line by line, but I'm distracted by a few other projects (...and No More Heroes) to get it done all that quickly. I'm also down to my last BD-R DL, so it I fuck it up somehow I'll need to buy more expensive blanks... that's a buzz kill, too, when you get down to it. But I am chipping away at that monstrous script, so it'll only be a matter of time before it's done.

To the best of my knowledge, ADV made their own telecine from the 35mm print they dragged around to various festivals at the turn of the century, while (at the time) Bandai Visual was still making non-anamorphic LD quality telecines back in Japan. This means that the subtitles will likely have to be re-timed at reel changes, but that's really not a big deal. It also means is that the English dub might not even come close to matching without massive shuffling cuts - which ARE a bigger deal, at least in my experience. Guess I lucked out with neither Memories nor The Five Star Stories having an English dub to worry about in the first place... as I've mentioned in the past, I like keeping any local (ie: English) language options available as a matter of archivist pride, not because I'd recommend anyone actually watch a film like Spriggan in English.

The producer of this project would probably be mildly disgusted if I gave him the dub tracks on his dual layer master copy anyway, so this is something I can figure out later when I'm deciding how to recompress the feature for BD-25 anyway. Another title - one that's already English friendly, no less - should undergo such a test before the end of the month. My hope is that I can fix the unnecessary window-boxing, keep the original lossless audio track, and not have to touch either the menus or special features, creating a perfect clone with a slightly lower bitrate and (hopefully) little loss in image fidelity. Field tests have shown that the freeware x264 encoder puts plenty of "Pro tools" to shame, and those wacky assholes at Criterion busted their humps getting it up to spec, so if it's good enough for them it'll be good enough for Kentai Films.

The extras are all SD materials upscaled to 1080i, so I suppose I could recompress those, too. I'd love to swap them out with 480i MPEG-2 versions of the same content to save on space, but I don't think I actually have all of the content on DVD. I'll have to create a DVD with the "missing" special features to consider this an exhaustive release, anyway. It's also a title currently available on Blu-ray in the US, in one form or another, so it's probably not a title I'll get away with selling to start with. Still, it'll be damn fine practice... 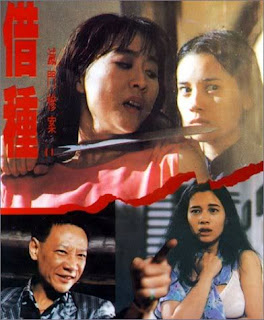 Switching gears for a minute, Billy Tang's endlessly sleazy Daughter of Darkness II is being encoded for DVD as I write this. Don't get your hopes up; it still looks like the wrong side of a wet fart. You can't squeeze blood from a stone, and the Wide Sight R3 DVD - literally the only video release this film worth mentioning - must have been telecined with Flintstones-era technology.

Something dawned on me while I was working with this hard-subtitled transfer that. See, I'm a rather cheap bastard who hangs on to expensive and heavy hardware until it's deader than dirt, and that includes one of the better looking 30" HDTV's Sony made back when tube sets weighing 100 pounds (and up!) was still the norm. CRT screens have overscan, anywhere from 5-15%, and my set is formly in the 8-10% range. I know because I fussed with the service menus until I had it to a point where I wasn't losing the edges on the majority of my video games, though of course now I have to deal with the rounded, bluging edges that prompted CRT manufacturers to introduce overscan as standard practice in the first place. 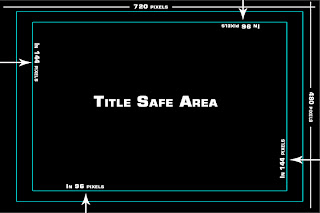 A common template used for subtitle generation.
In theory, any subtitles should be within the "Title Safe" area to be certain that it'll be visible on ANY TV screen. You can play it fast and loose by putting them in the "Action Safe" area and be safe on 95% of screens, and that's typically what I do. But keep in mind these are big, bold, player-generated subtitles.  Some Blu-ray titles have subtitles and menus that extend outside the "Title Safe" borders, so clearly this is something we'll see less and less of as technology marches forward, but it becomes very relevant when we're cleaning up an analog transfer with "burned-in" English subtitles.

So, how's Daughter of Darkness II look? Does a properly framed anamorphic upscale fit within the rather concrete and easily measured notion of the "Title Safe" screen real estate? 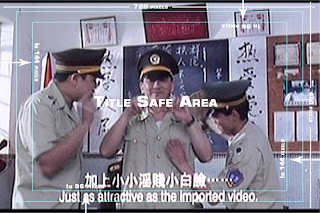 If only I and all Americans could read Chinese...
(Maybe 20 years from now?)
Well, that's a pretty harsh buzz kill. I've come up with a solution, but I'm not sure if the cure is worse than the symptoms... 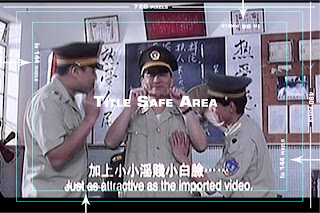 ...I've added a border of 28 pixels to the bottom of the screen and those fuckers STILL aren't title safe?! Curse you, National Television Standards Committee!

I don't know how much harder I can windowbox this damn thing... and, yes, there are thick bars on the sides. The previews above cut them off - it's not overly important here, just trust me when I say that the current script has bars on all sides but the top. And yes, it looks kind of weird. Kind of like this: 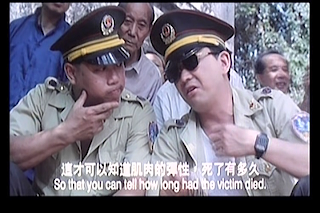 I think there's some tools in or for subrip that fix common OCR errors like that. Can't say I ever made an OCR script for anything other than script timing, though.

Does Subrip really work for hardsubs? As I understand it there's an option to go through an AVI file and look for them, but you'll basically have to type everything in manually (at least for "iffy" nightmare subs like this) and it's very possible to get a bunch of false-positives. At that point I figure it's probably easier just to load that hardsubbed AVI in Aegisub and scrub through it. (At least then editing would be easier than it would be in Subrip.)

The print already has English and Chinese subtitles "burned in", so the best I could do would be to create English subtitles in a black box and then slap them on top of the hardsubs. At that point I think I'd rather just keep the hardsubs, bad Chinglish phrasing and all.

I was actually referring to the Spriggan part of this entry, but I do believe Subrip does do some OCR for hardsubs, with varying results.

Very good information, may be useful for everything;)