The SPRIGGAN subtitles turned out to be okay, and I've managed to successfully patch the dual-layered Japanese Blu-ray release. I'm burning it tonight just to make sure there aren't any weird player related hang-ups like there were on Memories (goddamn seamless branching). It's something of a behemoth at just under 30 gigs, so there's no way I can even think of selling it without recompressing it to be under 25GB... I swear, Bandai Visual just cranked the bitrate hard enough to create a main video title that was 26 gigs and then called it a day. Yep, they had the fore-thought to realize that making the main film take up slightly more than a single layered BD-R would cut down on piracy, and I'll be damned if they weren't smart to do it. 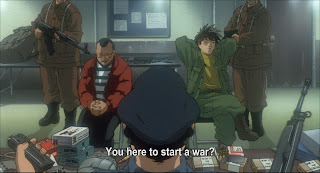 After we get a BD title or two out of the way - and a stack of episodes that need their subtitle scripts edited sooner rather than later - I'm going to be resurrecting a Kentai Films classic for DVD. I won't say which one just yet, suffice to say that if you keep tabs on the eBay and ultra-violence entertainment, China's bootlegging my own bootlegs, and I'll be damned if I let highly trained and poorly paid toddlers beat me at my own game!

For the non-record, Mystery Project X has been submitted in an official capacity, so short of the project manager hating the transfers' guts, it should be a done deal. I fully expect the fanbase to tear the transfer to pieces in reviews, but if they have even the slightest inkling as to how much work and care went into it, and factor in what an excruciatingly inferior source it was to start with, I think anyone who likes the film will be pretty satisfied. Until the original title owners dig up the 35mm negative, it isn't getting any better than this.
at 12:38 PM

(Although none of the bootlegs will have your name anywhere near them, but you get what I mean. ;) )