Pardon me while I take a smelly brain-dump, friends, but this one is really starting to bug me: 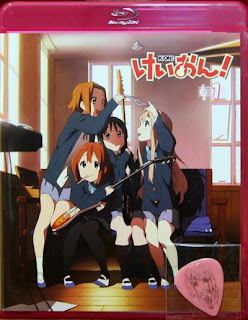 Oh my God, THE PINK!!
Well, that's what they tell you the show is about. It's actually about eating delicious cake. And nay, with Japan having its' own internet meme culture, that sentence does not have the 4-chan based connotations you might be expecting.

But speaking of having dicks in your mouth, let's see how Bandai's marketing the show in North America for a second:

When I clap my hand over my face and sigh deeply, understand it's not because Stephenie Sheh is a talentless hack. Yui as a character always struck me as just a little slow - not stupid, but possibly on just the right side of the mild-savant stereotype - and her performance is much less grating than it easily could have been... for proof of how badly this easily could have go down, go find an English dubbed clip of Death Note with Misa in it. (I fucking dare you not to wince.)

We've come a long way from Carl Macek was the singular filter through which Japanese pop-culture could filter through back to the English speaking world, and for it English dubbing is, on the whole, much more respectable and high quality than it was in decades past. Not being overly familiar with Miss Sheh's work I can't say if this is above par for her or not, but strictly on its' own, she and what little we have from her compatriots on display isn't particularly embarrassing.

The quality of the dub isn't really an issue, though... the reasoning behind it is where I'm drawing a blank.

So we're clear, when K-On! "premiered" on the fansub circuit, it became an instant hit... with an audience that has two peculiarities: One, they don't typically pay for anything. Two, they don't watch anime dubbed in English, or at the very least are willing to watch it without if it means that the product is free and available instantaneously. Oh sure, a couple of those leechers buy DVDs too, and recent Japanese research even suggests that outlets like YouTube only encourage fans who aren't yet convinced to drop a fortune on a show to buy it in the end at only the meager loss of the rental crowd - who, at least in Japan, rent and then burn backups of everything anyway. Clearly K-On! has a large fanbase in the English speaking world, but I'm willing to bet that the overwhelming majority of support in countries that actually speak English are from people who are enjoying K-On! without paying a dime for it... or, if they have already, they're spending $90 for two episodes and are that bleeding-edge crazy that makes the R1 market largely irrelevant in their eyes.

English dubbing was a standard created to sell foreign entertainment to the masses, I get that. Dubbing quickly became a standard feature for anime DVDs, and titles that couldn't really afford to get dubbed got dubbed anyway because that's what the market apparently demanded. I get that too. But here's where I see the disconnect;

Who the hell would actually want to watch K-On! dubbed in English?


Let's cut through all the arguments that "a foreign dub can improve on a weak original cast" or that "immersing yourself in your native language puts you in the middle of the entertainment" and all those other cute arguments dub fans like to prop up as smart sounding reasons for why they choose to watch their programming in another language; at the end of the day, dubs exist primarily as a way to convince someone who doesn't like to read to watch a film. Certainly subtitles are a compromise in and of themselves, but short of being born in another country and being utterly familiar with all the cultural nuance of said country that a film made elsewhere takes place in, you're never going to get the same experience as the native audience. It's just impossible, and dubbing only further separates you from that original work by a step further than subtitles ever could.

Sometimes those dubs are good, sometimes they're shit, and more often than not they're a sort of clumsy mediocrity that neither makes me want to kill myself by stabbing out my ears with hot soldering irons, nor makes me actually want to continue watching more in any language sans its' original. Dubs just are, to me, and while I don't wish they didn't exist*, I also can't fathom their inclusion on shows that are never, ever going to extend outside of the dedicated fandom for the title that already exists anyway. Honestly, the last time I heard a legitimate argument for subtitles not being an option was "I have a reading disability." While that certainly does suck, I'd also point out that not being able to watch foreign films are probably the very least of your text-related problems.


*Anything that keeps an industry I happen to like alive - and doesn't affect the content I'm after (in this case the subtitled version) - isn't a "bad thing".


In the case of K-On!, that fandom is literally people who are enthralled a 22 minute program about a gaggle of sketchy teenage personality quirks sitting around not-practicing their instruments, and only occasionally exploding into a triumphant music video. More likely than not, the big dramatic device in the episode will involve the heroine dreaming that her friend's eyebrows are edible, or about how terrified the bassist is of being on stage, or how their club-supporting teacher is going to molest the crap out of them once school ends. No, seriously. Sawa-chan is TERRIFYING. Imagine this character had external genitalia and then ask yourself if you wanted that archetype around minors, much less in a position of power... my point is, it's literally a title with no plot, with no story arcs, no action, no nothing but silly sight gags and that slightly weird feeling that you're the producer on The Truman Show, peering voyeuristically into the lives of these friends who spend all their time drinking tea, wishing they were famous, and occasionally writing awful poetry about chocolate sauce.

In short, it's the kind of title designed to designed to appeal straight to the pallet of the rabid otaku audience. There's no gushing blood or stomping monsters or transforming robots to pull in even the slight casual audience. If you like these shows, virtually your only option is to watch them in Japanese, because this wafer-thin sort of charming property is only especially popular in Japan to start with. In effect, if you're going to buy K-On! on DVD (or Blu-ray), you've already watched the show in Japanese at least once. And if you've already watched the show, you should have even less of an excuse to "need" to watch the show in English.

The English dub for a title like K-On! may not be quite as dangerous as putting sugary sprinkles on a diabetic treat, but it does strike me as just as redundant. This is the sort of entertainment that only people familiar and comfortable with Japan's penchant for fetishising and worshiping non-existent two dimensional idols would ever convince themselves to watch in the first place... so how many of these people wouldn't spend money on the show just because it didn't have an English dub?

That said, the shows' massive popularity in Japan could have some direct impact on the release, too. Having an English dub in general could be seen as a badge of the title's international marketability by the Japanese rights holders, and the fact that the 14 episode TV series is being released on four individual DVDs instead of in a complete box set up front suggests someone behind the scenes is mandating that the release be a certain way that's no longer typical for the market it's entering. Bandai also still releasing the Kurokami anime on Blu-ray in English only, again, due to the Japanese end having (profoundly) unfair restrictions on the US license, so K-On! being in the same boat doesn't seem too unlikely.


Meanwhile, Bandai is releasing The Girl Who Leapt Through Space/宇宙をかける少女 subtitled-only. This is a show populated with massive spaceships, talking robots with personality disorders, ridiculous transforming robots, jiggling tits held snugly in skin-tight flight suits, and jokes that extend beyond that sort of dry, almost Seinfeld-esque area of the 'slice of life' mould. In short, it's the kind of show that probably could have pulled in a few more viewers with an English language option, and it isn't going to get one. 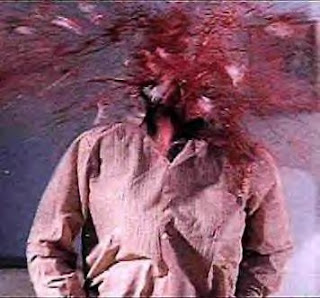 I'd have capped the exploding head from THE PROWLER myself,
but the movie sucks donkey balls. DAWN OF THE DEAD it is!
In a totally unrelated stroke of irony, the Japanese title "Sora o Kakeru Shoujo" was phonetically shortened by fans to 'SoraKake'. This was mistranslated (...intentionally?) in English as "Flying Cake". So K-On!, the show about girls who eat cake, gets the treatment that would have made more sense to the show people say is about cake, but isn't! Is this some super genius A Beautiful Mind level trolling on Bandai's part, or just the most retard coincidence imaginable?

Anyway, if you like either of these shows - and frankly, they're both pretty good in their own way - show you love them by actually buying them. Japan gets a few cents out of the deal, and it tells the American middlemen to try getting more shows "like that one".
at 7:05 PM