Motion Compensating For Something

Since we're all reasonably clever people here, I'll say that "NTSC is 30 frames per second" and "PAL is 25 frames per second" and assume you understand that's the basics - there's far more to it involving Hz and colorspace and all that, but that's the most obvious difference. NTSC is 30fps,  PAL is 25fps - that's by far the most obvious and important difference between the two. The US, Canada, most of East Asia and parts of South and Central America are all NTSC. Europe, Africa, and pretty much everywhere else is PAL. So far so good, yeah?

When you're lucky, NTSC transfers of film based material are transferred at 24fps and use 3:2 pulldown to jerry-rig 24fps playback on a 30fps signal. PAL just speeds up film to 25fps and pitches the audio slightly so you "can't hear" the difference. (Liars!) They're both clever in their own right, and whilst 3:2 pulldown introduces "frame judder", PAL introduces speed-up, so they both have their native flaws. PAL has higher resolution than NTSC, but both pale in comparison to 720p, so all of that's more or less irrelevant now.

What really grinds my gears are standards-conversions, though. It's inevitable that, every now and again, an NTSC country will get a PAL master tape (or vice-versa). At that point speeding up the frames to PAL or slowing it down to NTSC may no longer be an option, and the only realistic solution is to run it through a converter box that blends the original frames together at a new frame-rate. The runtime stays the same, as does the audio pitch, it just does one of the following:

* Drops 30fps down to 25fps and blends frames together (NTSC > PAL)

Both processes are "destructive" to the integrity to the source material, and once it's done, it can't really be un-done. You just have to deal with the fact that frames have blending, jerky motion and interlacing when they really shouldn't. It's the very nature of the beast.

If you're clever enough to dump the original PAL or NTSC source on a computer, you can remove the redundant frames (IVTC) and then just change the framerate to whatever you want, thus creating a "real" NTSC transfer from a PAL source, or vice-versa. I've done it plenty of times before - I did it for an official label release about a year ago, and actually just did it again for an upcoming Kentai Films title. You can't always do it, for one reason or another, but there was one instance when I was working with a different label that I assumed would be converting 25fps back to 24fps NTSC, since they had done that in the past, but they didn't.  A shame nobody actually like, you know, told me. Or even sent me a copy I could inspect. But enough about days gone by!

It's unfortunate that more studios don't request the masters be sent in their native frame-rate and do this, but you basically need to have somebody on hand who knows exactly what he's doing to do it properly - who knows what pitch the film's audio is supposed to be at, who knows how to manually deinterlace individual frames, and who knows when a source is just plain fucked. Plenty of labels are basically out of luck by default, and even some very reliable studios have managed to fark the process up for one reason or another. But with a careful eye, a transfer made within the last 15 years, and a willingness to manually inverse telecine that bad boy it should be possible damn near every time.

So, tell me friends: What happens when you live in an NTSC country, and you're tasked with converting a PAL transfer to the local frame-rate... that was already an NTSC > PAL conversion to start with? 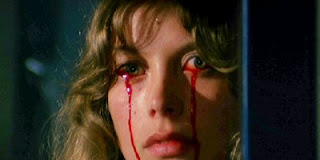 Two words - CRY BLOOD.
Having compared this NTSC > PAL master to the "other" NTSC master available, that Asian source is such a festering piece of analog dung that it honestly isn't even worth considering. It even has "hard" interlacing, too, so you can't even perform an IVTC at all. The PAL source - despite having a completely screwed up framerate - looks like it was a decent digital transfer from a stable 35mm source, and having tweaked the colors I think that, in the broadest sense imaginable, this particular film has never looked better on DVD.

I have two real options: Doubling the frames and Converting the frames. The former means that I literally repeat every 5th frame to convert 25fps into 30fps. The result is an exact replica of the already fucked PAL source... except now the stuttering is even worse than it was before. The latter means that I blend all of the frames a second time - this means the transfer doesn't suddenly stop-and-go, which is good, but also means it has that weird, "busy" look during movement you might associate with cheap Soap Operas or home movies relating to video cameras that capture 30 frames a second. Neither method looks especially good, but they're the only option I had left once the original NTSC frames were destroyed completely.

In the end, I decided to make two transfers and let the label decide which they find less offensive.
at 1:36 PM