Not This Rose Colored Hell Again... 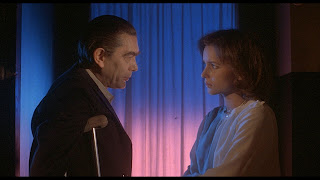 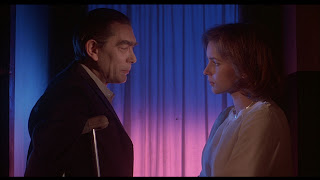 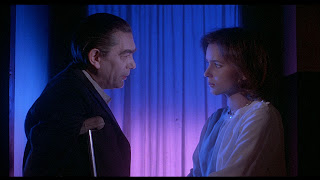 Blue Underground USA
I thought by the time Blu-ray hit the scene I could be done comparing multiple transfers... I figured we'd get one decent HD scan of the negative, different countries would slap their local languages on them, and we could finally move on with our lives. Of course, I should have known that for any film made by Dario Argento there HAS to be a half-dozen releases, and they all have to be completely different. I don't know why... it must be goddamn law or something.

INFERNO is a film I was lukewarm to when I first saw it a few years ago, but I've been curious to give it a second try ever since. It's a bizarre experience not unlike a nonsensical fever dream, not quite terrifying like Suspiria and Deep Red before, just bizarre and violent. I'll admit that I find it the weakest film from what I consider Argento's strongest period (1975-1987), but I certainly can't dismiss it as a total misfire - especially after witnessing the failure of The Mother of Tears since! But regardless of what I think of the film as a work of narrative horror, it sure is pretty, and as such how those visuals are presented on Blu-ray are probably of the utmost importance. With all due respect to Kieth Emerson, the presentation of his score doesn't have nearly the same impact on the film as it does on Suspiria.

First, let's tic the most obvious issue off: Arrow Video used DVNR to remove virtually all of the grain from the transfer. Yes, Inferno is a pretty gritty looking affair, and to Arrow's credit the DVNR hasn't resulted in overly waxy faces or a major loss in detail. Reports are that it has an unnerving "sterile" look in motion though, as if Inferno was shot on HD Video instead of film. I'll come right out and say it - I'm a grubby little grain lover - so while the Arrow release probably could have looked far worse, it's out of the by default. It's a shame, too... Arrow included some really nice exclusive extras on that set.

The Wild Side French version has more information on all four sides, and by far has the most neutral color timing of the three; white appears white, and neither contrast nor color saturation seem to be overbearing. Unfortunately it also gives the film a slightly dull, washed out look that'll be easier to see in just a moment. The Wild Side disc also has "forced" French subtitles when watching the film in English, so unless you're willing to re-author this yourself it might not be worth it.

Blue Underground appears to have identical framing to Arrow, which is... odd. But okay, I guess, since we're only losing somewhere around 3-5% f the frame, which would be normal at an actual screening. It has stronger saturation and crushes blacks slightly, which helps hide some of that over-exaggerated grain. I'd say it was the strongest of the three transfers, but the film has undergone an exaggerated blue push. I'll admit it doesn't look so terrible in the above example, but let's examine another scene... 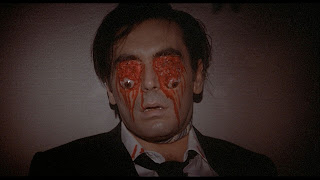 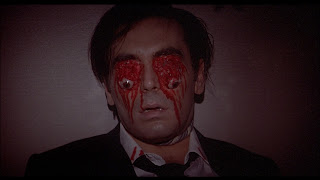 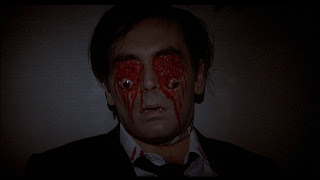 Okay, now this... this is just fucked. While I'll freely admit that the washed-out qualities of the Wild Side transfer have left his jacket looking positively ghastly with all that exaggerated, over-exposed film grain there's no way that blue, dingy color on the BU transfer can be totally right. It looks like I've closed one eye wearing old-school 3D glasses! In this particular instance the Wild Side transfer is the best of the bunch; Arrow's saturation boosting helps the glowing rose lighting, but it's made the fake blood a bit too vibrant and smeared some of the detail hiding in the prosthetics.

How about one more set, just for fun? 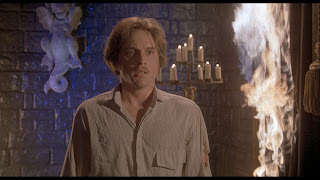 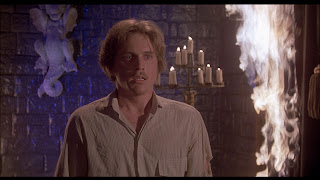 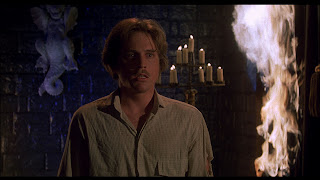 ...and now the Blue Underground transfer looks superior? Yes, the blacks are crushed slightly, but take a look at his armpit on either the Arrow Video or Wild Side transfers and you can tell they're pushing low-exposure footage to make it brighter than really is. I've never been totally happy with the levels during the finale on the Anchor Bay transfer - I've always thought it looked too dark to appreciate the intricate art design that was lurking in the crushed shadows, which seemed to defeat the purpose of building such a gorgeous set for the final reel -  but I'll admit that it looks preferable on a purely technical level to the washed-out gamma on both the Arrow and Wild Side transfers. So I dunno'. This one shot looks better on the BU transfer, but it may not hold up over the course of the whole sequence.

Overall the Wild Side transfer very closely matches the remastered Italian DVD from 2007, whilst the Blue Underground transfer is extremely similar to the 2000 Anchor Bay transfer - just check Michael MacKenzie's comparison. This was from the same period that AB was consulting with cinematographers to be certain their classic films were being presented accurately, so it's entirely possible that input was given by Inferno's DP, Romano Albani - but I can't for the life of me find anything other than the box, other than saying it was "transferred from the original vault negative materials" - which for all I know means an IP was consulted rather than Mr. Albani himself. He certainly wasn't interviewed like Luciano Tovoli was for Suspiria, and getting "approval" from anyone is usually something you tout on the case if you bothered to do it...

If by "Freshly Transferred" they mean 'Circa 2007', then this is absolutely true. The framing is 100% identical to the Arrow Video release, and the grain structure is the spitting image of the Wild Side transfer, so I'm confident that all three transfers were taken from the same ultimate HD source with different levels of tinkering along the way. Their press materials for DEEP RED read almost the exact same way, so my expectations are so low I'm still liable to trip right over them.

As for what transfer of most reflects Dario Argento's original fever-dream intent... honestly, I have no fucking clue. Some Argentophiles swear up and down that the Anchor Bay/Blue Underground transfers match what they've seen projected on 35mm, but I don't know nearly enough about the film's production history to know if they were specifically trying to give it that blue-hued and high-contrast "look". I feel the overall saturation of the Arrow transfer is the easiest on the eyes, and the neutral color timing on the Wild Side master is preferable to any other release floating around, but the Blue Underground transfer has fixed the wonky black levels... if only by crushing them. Each transfer has its own unique positive qualities, and odds are consumers will either just buy the local release for simplicity's sake, or they'll buy them all and never be totally satisfied.

Worse yet, we aren't even through with Inferno on BD: German cult label Camera Obscura promised last year to deliver the ultimate release of Inferno, including not only a host of exclusive extras but their own transfer approved by the film's director of photography. If you're looking for the "last word" on the film that version might be the one to wait for, though you may have to wait for some time. Camera Obscura promised their release would be available before Blue Undergrounds, but with the US release slated to ship March 29th and the German release nowhere to be found it seems their bravado proved at least slightly false.

With Arrow Video and Blue Underground both having a multitude of exclusive special features, it becomes hard to recommend one over the other. Arrow's transfer is the least impressive of the three, but it has the most extras by a wide margin. The Blue Underground release has a few brand new goodies and is pretty damn cheap ($20.99 for Amazon pre-order as I type), but the color timing has me scratching my head. The French release is a bare-bones affair with a fairly nice looking transfer, but it's also the most expensive and has forced French subtitles... I guess it's kind of a no-win situation no matter where you turn. I said from the start that I'd wait to see the Camera Obscura and Blue Underground transfers before I spent a dime on either of them, and with all of the above images I still think that'll be the safest path to take.


But hey, maybe this will be the worst thing Dario Argento related we can talk about this year- 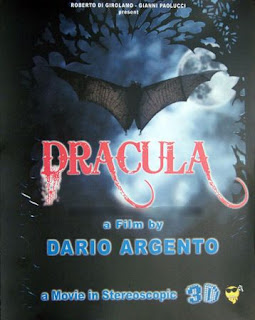 ...oh, how could I EVER forget?
Did I ever mention that his next film was "Dracula 3D", and that from the looks of things he's somehow making in 1992? Fuck me. Now I'm not saying I want il maestro to drop dead or anything, but goddamn man! Can't you retire already? Nothing good could possibly come of this combination, and if saying "Dario Argento directs Dracula 3D" wasn't proof enough, the fact that poor Rutger Hauer has been dragged into the mix only makes matters downright repugnant.
at 9:18 AM