Flesh Eating Upscale: FLESH EATER on Blu-ray is a Joke

First of all, I need to thank WTF Film for their look at Shriek Show's Blu-ray release of FLESH EATER - or, as it's better known in the United Kingdom, "Zombie Nosh". (How I love that title...) I actually do own a copy of this film on DVD, but have yet to sit down and watch it. I guess I just don't get drunk often enough to convince myself that 90 minutes of Rednecks vs Zombies made almost entirely by the dude who played "the graveyard Zombie" over 40 years ago in Night of the Living Dead is the height of 20th century culture, but I'd certainly never fault others who do. To each their trashy own, I say.

Media Blasters has been incredibly uneven with their HD offerings: Anime titles including Moribito - Guardian of the Sacred Spirit and Queen's Blade have been released in their full, native 1080 glory. Versus and Ichi the Killer were obvious upscales of SD Digibeta minted from the start of the century. Visible resolution on MB co-productions including Death Trance and Shadow: Dead Riot are... questionable, but since it's possible that neither of these titles were actually shot or edited on HD equipment to start with, let's be fair and just leave them at 'questionable' for the time being.

So, how does the first non-Media Blasters co-produced Shriek Show catalog title look? 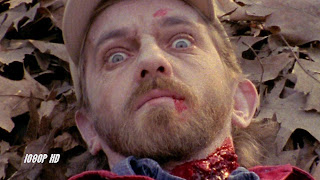 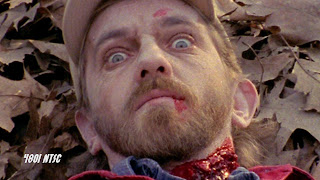 So... we're back to Standard Definition upscales being passed off as High Definition? Fan-tastic, Media Blasters. Just fucking fantastic.

Yes, I know the "1080p" version looks ever so slightly sharper; but that's the magic of edge-sharpening on upscaled material! If you look at the texture on his collar, the ribbing in his hat or the hair on his manly facial scruff, you'll notice that the NTSC version has the same level of real-world detail, and that's with the downscaling softening the upscale slightly by nature. There isn't any more texture, or depth, or even grain on the Blu-ray - just extra chroma noise which was sharpened after it was upsampled. I could do the same damn thing in AVISynth... and between you and me, I have on more than one occasion.

"But the BD looks better than the DVD, right?" I hear you thinking. "WTF Film even has a split-screen to prove that the BD is sharper, and not interlaced. That's good, right?"

Technically yes, the "1080p" Blu-ray is the better option... but then only because the DVD was a pile of crap to start with. MB was never shy about cranking up the DVNR or encoding transfers as interlaced when they really didn't need to, which means most of the Media Blasters catalog titles would look virtually identical to their Blu-ray editions if they had taken more care when they produced the DVD release years ago.

The only other company out there who regularly releases SD content upscaled to 1080p is FUNimation, and most of the time I'm willing to give them a pass. You know why? Because animation from the late 1990s and up through the mid 2000s was animated in SD and then recorded onto Digibeta. There is no film master to scan in high resolution; when you buy Fullmetal Panic or Daughters of Mnemosyne on an upscaled BD, that's as good as it's ever going to get.

When a feature film was shot on 16mm or 35mm, you can simply go back to the film elements and make a new high resolution scan. Instant High Definition, no re-shoots required. But if you're still upscaling that shit, you're just being cheap and lazy. Maybe they'll trot out the "We can't find the negative anymore!" argument if more people call them on this bullshit, which would be amusing enough to watch. Keep in mind that they found the damn film elements less than 10 years ago for DVD, so unless there was a tragic fire at autuer Bill Hinzman's house that consumed all of the film materials, I don't buy that.

I'll admit that I've had a few knee-jerk reactions to some transfers that may or may not have been sourced from SD materials. But there isn't a single screenshot on the WTF Review that would lead me to assume that this was made from an actual HD master. Media Blasters can't even suggest that it was a "real" HD transfer hit with heavy noise reduction - like many of the blurry Arrow Video transfers kicking around - because the transfer is still noisy as hell!

And before anyone gets the wrong idea, I understand that this was shot on 16mm and blown up to 35mmm... and then, uh, released straight to video anyway. It was never going to look especially good, I know that, but it didn't have to look like a DVD hit with a sharpening filter, either. Just look at MGM's release of Wes Craven's Last House on the Left for an example of what even a nasty looking blow-up print can look like in HD. Bill Lustig's Maniac! isn't a reference transfer by any stretch, but even that was actually transferred at 1080p.

Just to prove that MB is capable of making an incredible looking Blu-ray, here's a (cropped) screenshot from what, to the best of my knowledge, remains their only 1080p release to be sourced from an actual 1080p master: 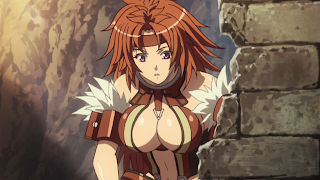 SD boobies? Not on THIS blog!

Understand that I don't want Media Blasters to fail... I just want them to release titles that look more like Queen's Blade. Not in the "big titted anime" sense (...well, not all the time!), just in the "it's an HD release from an HD master" sense. That isn't too much to fucking ask, is it?

I do hope that anyone remotely interested in actually watching Hinzman's low-budget redneck gorefest buy The Zombie Pack II instead of the BD - not only do you save a few bucks, but you also get Mario Girolami's Zombie Holocaust and Andrea Bianchi's Burial Grounds essentially for free. Just so we're clear, this is what's on my shelf, and I didn't buy it for Flesh Eater...

Why do reviewers go out of their way to praise releases that are this poor? Sometimes it's just denial, or even ignorance - I've been guilty of both myself at one time or another. Plenty of people (and I'm not pointing to anyone specific here) don't want to bad mouth a product they get for free, I get that - if I said any of the above about a title MB gave me gratis, they'd never make that mistake again. Others still don't want to say anything to harm an industry they want to see flourish, which I think is the strangest reason of all; if you can't be honest and say that a product is shit, you're protecting a product that rightly deserves to fail. Flesh Eater on Blu-ray is just one of those products.

EDIT: While most of the Shriek Show catalog titles are still MIA, this one was actually released about six months ago. So forget everything I said about WTF's "Early" review... not that MB can get a title out en-masse on release date to save their business these days anyway. (Seriously now, how many weeks did it take non-Amazon retailers to get Queen's Blade?)

Hi there, and thanks for the link! For starters, yes, FLESH EATER on Blu-ray IS a joke - and a bad one. I don't agree with your assessment that it's an SD up-convert, however I'm not going to go so far as to say you're flat-out wrong. MB isn't exactly forthcoming with info about their transfers, and they've released enough unforgivable garbage in the past to give me pause.

I'd argue that the print damage is more telling than the detail in this case (which, as you've correctly noted, sucks), as it is (mostly) inherent to the 35mm positive the transfer was taken from as opposed to the original 16mm negative. The overall image is undeniably soft, noisy, but the damage to it is sharp and focused and doesn't, to me at least, look to have been artificially sharpened.

I'll append my review with a few samples in a short while and you can make your own call. Thanks again for the link, and curses upon you for convincing me to waste yet more of my life on fucking FLESH EATER.

Also, an extremely minor correction. This isn't an upcoming release - it was put out last August with about as much fanfare as FLESH EATER deserves. And with regards to your closing remarks, I actually paid for this. Morbid curiosity can be a dangerous, expensive, thing.

You're absolutely right, Kevin - FLESH EATER came out last year, but I accidentally lumped it in with that release of BUIO OMEGA I'm still waiting for.

All the same, thanks for checking in and keeping an open mind. Keep up the reviews, please - I can't afford to buy all of the upcoming Arrow Video releases without screencaps first!

Here's hoping that Arrow keeps sending me screeners - I did a number on their check disc of The Beyond (a number it fully deserved). Anyway, I've been enjoying your writing and will be linking you in at my site tout suite. Take care!

I actually worked on this disc, and held the film in my hands. No one ever said it was a GOOD film transfer, but it's definitely a film transfer. Probably needs more digital work, not less...

I have no doubt that Flesh Eater was mastered from a 35mm IP, or something similar. Not every film has the elements left to look like Taxi Driver - I understand that perfectly. At best, Flesh Eater would look like LAST HOUSE ON THE LEFT. It'll never even look as good as THE EVIL DEAD or THE TEXAS CHAINSAW MASSACRE because that was mastered from the 16mm camera negatives, rather than the 35mm blow-up negs.

That's not the issue, though. The problem I have with this release isn't just that the transfer sucks, is that this supposedly "1080p High Definition" Blu-ray release looks like a Digibeta from 2003!

Media Blasters has released such shoddy quality product over the years that I have little reason to doubt they just upscaled their SD materials and figured, 'fuck it, nobody will care enough to call us on it anyway'.

(I don't think MB is alone in being dismissive over poor materials, either, but we'll cover that another day...)

But I'm all ears, Anonymous Flesh Eater Guy: Did you perform restoration work on the 35mm print? Did you actually oversee the telecine? What kind of hardware was used, what sort of tape was the project saved onto when all was said and done?

The ball's in your court, Anon: What do you know?

Would be interested to hear more details about the transfer process as well, as the disc / packaging gives absolutely zero indication of what went into it. There's not even a requisite "in stunning HD" blurb, which is probably all for the best now that I think of it.