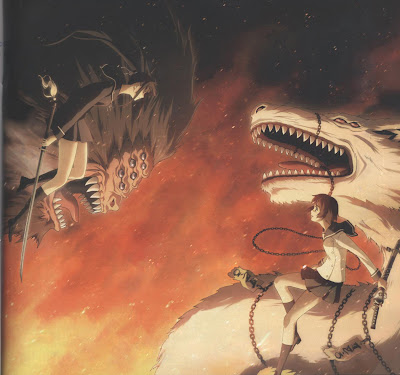 GA-REI ZERO/喰霊-零- was an unusual anime series from late 2008, on quite a few levels. For one thing it was a prequel, rather than an adaptation of the still-ongoing THE ENCHANTED SPIRITUAL BEAST GA-REI/喰霊 manga serial written by Hajime SEGAWA. For another, it starts off by literally introducing the cast of heroic characters who save Tokyo from a giant invisible monster, lets them have a moment to celebrate their job well done... and then murders each and every one of them as violently as possible before the end credits roll. Episode two continues down this dark and supernatural path, but episode 3 represents a massive shift in the show's tone and focus, having left me when I first saw it flabbergasted. I wasn't sure if the entire show had just rickrolled me hard or if it knew exactly what it was doing... thankfully, by the end of episode 12 I was satisfied that it had achieved the latter. Like so many brilliant works of cinematic upset, it subverts expectations just enough to clobber you with them later on, and I'm happy to say that Ga-Rei has a point to all these sudden shifts in mood and expectations... 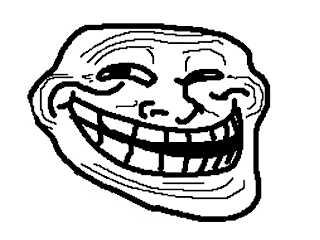 In other words, it's not The Endless Eight or Umineko no Naku koro ni...
Ga-Rei Zero was a phenomenal series that kicked me in the balls with a flying motorcycle, though being totally unfamiliar with the comic it was based on I can't say if it serves as a decent introduction to the franchise that follows or not. The first episode is such a straight faced bit of monster-hunting military fantasy that I had no idea less than three episodes in I'd see two girls eating the same stick of pocky until they were locking lips, much less that the show would later drive spiked crystals through one of them until they were a total invalid. Ga-Rei Zero has a mean streak a mile wide and is refreshingly unafraid to get its' hands dirty by slaughtering main characters or forcing them to do horrible things to one another, but unlike the endlessly dour monochrome worlds of Shigurui or Jin-Roh, there's so much more on display than the nihilism. Ga-Rei effortlessly combines dramatic shoot-outs, gag comedy, moe shenanigans and Eastern mysticism into a wealth of entertainment that flips a switch from being cute and charming to horrific and sadistic, like a bipolar teenager who's created a monstrously catchy tune that switches from Justin Bieber to Children of Bodom in the middle of a natural progression... it honestly shouldn't work, but goddamn it, it does, and it probably works better than any other show out there that's tried to combine cute girls and extreme violence without feeling utterly pandering or pretentious. It sits alongside the queens of moe-horror, Elfen Lied and Higurashi, quite comfortably - though each of these titles are so dramatically different that it's difficult for me to pin down one as better than the other - it'd be a bit like like comparing Predator to The Deer Hunter just because they both have guys shooting each other in the jungle.

The series was directed by Ei AOKI, who's since directed a similarly excellent (though VERY different) TV series called Wandering Son/放浪息子, a show best described as a serious drama about transexuals in middle-school, so the last thing we can accuse the man of is being a one trick pony. Certainly Ga-Rei Zero may alienate some fans by pushing both ends of the anime pop-culture spectrum, but for those who don't mind a little cute in their gore (or vice-versa) will find a rewarding and very satisfying 5 hours of solid entertainment in this sexy little box... 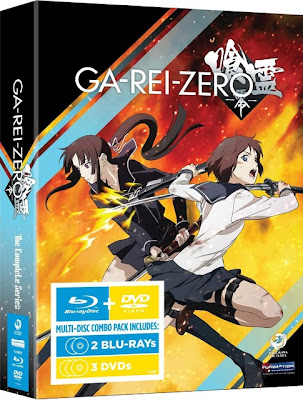 FUNimation released the series this week on DVD + Blu-ray. No, that's not "DVD and Blu-ray", that's "DVD with Blu-ray". Apparently actual brick and mortar retailers - which, by the way, is 21st century code for 'Best Buy' - tend to not break their Blu-ray titles down by genre, which has led specialty retailers (like FUNi, what with all of their animoos) struggling for a way to get customers to actually find Blu-ray titles in the general, vaguely-alphabetized Blu-ray shelves. Obviously they can't afford to get their own special endcaps like Di$ney, so they did what they felt was the next best thing: They canceled the separate DVD and Blu-ray releases for all their upcoming titles, and are instead selling them as a "Combo Pack" as a single SKU in a DVD-sized box. Though this seems ridiculous at first, let's not forget that FUNimation's own Lance Heskell has said that consumers can't always keep track of when a title is DVD-only, or finds that a store stocks the DVD and not the Blu-ray, and they'll sometimes compromise by buying the DVD without realizing they even have a better option. FUNi likely sees this as the best compromise to both push Blu-ray and keep DVD customers happy at the same time. I suppose that stuffing a "free" DVD copy in with a Blu-ray release is really nothing that unusual these days, but at least most of the Hollywood releases of this nature have the courtesy to slap the DVD in a squat blue case. That might not mean much to some people, but I've got to tell you, I really do appreciate it. 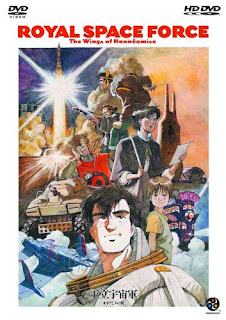 Do you remember HD-DVD?
Yeah, me neither...

To be totally fair, FUNimation isn't the first studio to take this asinine approach: Bandai Visual released several of their initial catalog titles in a DVD sized chipboard box with both DVD and Blu-ray (or even an HD DVD!), but as these releases proved to be the ire of HD-only enthusiasts, they eventually dropped the SD option and sold them in more sensible packages down the line - or they did in Japan, where Bandai Visual is still kind of a thing. Despite several of these having English dubbing on the discs - including Ghost in the Shell, Jin-Roh, Patlabor and Patlabor 2 - only Royal Space Force: The Wings of Honneamise was ever released stateside in this manner. (Jin-Roh got a similar package, but the DVD was dropped for a storyboard book.) I do own Honneamise, and while I was never entirely happy about it, the film is such a triumph of then-fledgling studio Gainax as a work of pure cinema that any self respecting fan of animation really needs a copy on their shelf. The fact that it had a translated booklet, and that I got it for less than 50% of the regular $80 MSRP sure didn't help my decision, either... still don't regret it. That box was such a hardcore monster that it was dropped from a height of about 3 feet while still in the plastic wrap, and the chipboard didn't even scuff. If it were bigger I'd turn it into a nuclear fallout shelter... it's that fucking hardcore.

FUNimation has been charging an extra $5 for "First Press" releases in the last year or so, and Ga-Rei Zero is no exception. The artbox is fairly attractive and notably sturdier than any of those flimsy cardboard monsters you'd get a season of The Boondocks or Ren and Stimpy in, though it's nowhere near as monolithic as the Bandai Visual variety. If you want to skip the deluxe packaging, you're going to have to wait until FUNimation sells out of them and then you can get the $60 version. Odds are it'll be two thinpacks in a cardboard sleeve, but as they literally haven't been produced yet we can only wait and see.

But at least the Blu-ray will look and sound fucking awesome... right? 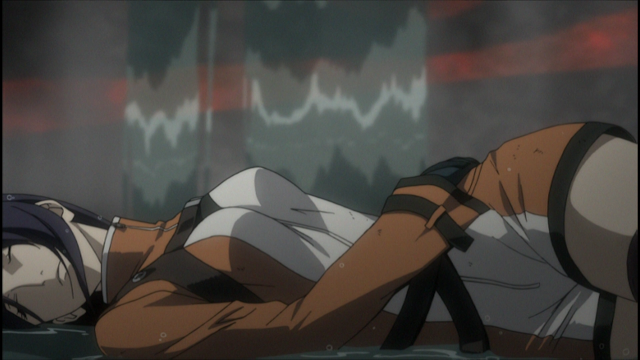 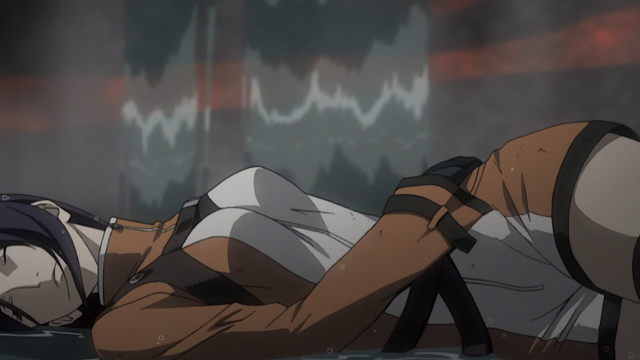 Well, despite the show being less than 3 years old it was animated in SD and then upscaled for HD broadcast and Blu-ray. The results are, as expected, not as nice as a "Native HD", but better than a DVD which is forced to use lower bitrates and less efficient codecs. The JP release looks about as perfect as an SD upscale can get, while the US release seems to have sharpened outlines in an attempt to give it more "oomph"... some people like it, and I'll cop to having used an edge sharpener once or twice in pretty dire circumstances, but to me it just makes the outlines look warped and over-processed. The grain is less refined on the FUNi transfer, too, but the US transfer is still fairly grainy, so if it was an attempt to actually denoise the source it's a resounding failure. More likely than not the US release cramming 9 episodes on a single disc has stressed the encoder to the point where it just smooths the grain out slightly - the result isn't nearly as damning as it was for earlier titles like Tsubasa and Samurai Champloo, but it's still there, no doubt about it. The whole transfer is decent, but still something of a disappointment for my first FUNi BD pre-order is ages.

All that said, FUNimation has released several "SD Remastered" titles (ie: upscales) from 480i masters, and this one still sits comfortably on the "pretty good" end of that admittedly spotty track record.The US release is readily available and retails for $65, or $60 if you want to wait for the regular edition. I paid less than $45 with shipping, and if you're paying more than $50 you're doing it wrong. For comparison, the JP box set is no longer available and retailed for over $300 when it was! It's a shame that FUNimation's first "Premium" DVD + Blu-ray combo is less than ideal, but the show in it is great, and the price for the quality seems like a fair enough compromise. Just don't expect it to rock your home theater to the core... and if you don't give a flying fuck about a chipboard artbox, don't rush. It'll be available for a while yet, and for a few dollars less at that.

Audio is Dolby TrueHD lossless for both tracks - English is in 5.1, Japanese in Stereo, as standard for most Japanese TV shows. Subtitles are tiny and white with a very thin border, which is more or less the norm for FUNimation; so long as you don't have your contrast set too high and don't sit a mile from your screen, you shouldn't have any trouble reading them. The DVD release is split across 3 discs with 6 episodes each and a separate bonus features disc, while the BD is 9 episodes on the first disc and then 3 episodes + extras on the second. The packaging subtly favors the DVD even beyond the case size, giving episode numbers that correspond to the SD release. I'll admit I haven't given the set more than a curious glance, but having watched the show twice - once when it was being broadcast, and again once I had all the R2 DVD fansubs, I don't feel the need to watch it again immediately.

Don't let my nitpickyness fool you: I still recommend the release, despite my misgivings over the DVD packaging and feeling the transfer a "B" upscale when it so easily could have been an "A". FUNi's off to a rocky start with these combo packs, but the show is a keeper, there's an unusually high number of bonus features, and the packaging (despite being DVD sized) looks pretty nice. It doesn't look quite as nice as it could be, but for the price it's acceptable.
at 10:50 PM

Binary Options is the way to [url=http://www.brokersring.com/]make money[/url] securely online

The article is very interesting and very understood to be read, may be useful for the people