The cool cats at Twitch hosted an interview with US Distributors "Invincible Films" over their plans to release A SERBIAN FILM, which friends of the Kentai Blog will know as one of the half-dozen or so films I've ever felt kicked me square in the balls. In a move that probably surprised absolutely no one, they presented a "heavily cut" version to the MPAA in the hopes of getting an R-rating... 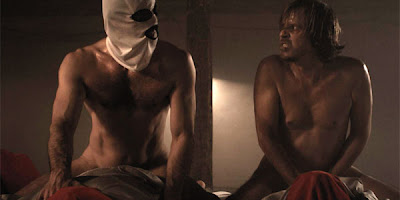 There's absolutely nothing R-rated going on here.
You'll, apparently, just have to trust me on this one.
Didn't fucking happen. Seriously guys, that might have been the biggest waste of time since Mel Gibson trimmed six minutes from Passion of the Christ in the hopes that the remaining 2 hours of a dude getting tortured to death would somehow squeak by with a PG-13. Here's the part that needs to be repeated, ad naseum, however:


'The DVD and Blu-ray will be edited, but it won't be as edited as the theatrical version.

It really depends on what happens between now and then, what we end up doing. There are obviously some legal issues we have to look at.'

I'm not certain if they're worried about finger-pointing of "Child Pornography", which is what got the poor bastard who runs the Stiges film festival in Spain in some seriously deep shit, or that catch-all "Obscenity"... which the film could (and, eventually, probably will) run afoul over in pretty much any country that bothers to release it uncut. The film is certainly foul, disgusting and perhaps the single most offensive feature film ever put together as a work of entertainment, but the fact that even the guys who paid money to distribute it in the US are getting cold feet leaves me only able to sigh and shake my head. It's not that I want them to do time or anything, it's just that they knew better. Whilst America is one of the freest nations in the world today, there is still a line that home video distributors simply can't cross, and when you put your balls on the line and say you're releasing A Serbian Film you'd better fucking mean it.

Oh sure, they've already made a rather sound argument; "If we don't release it cut, we can't release it at all." And that may be true. But if it is true, why the fuck did you even bother? Bootleggers existed for a reason; they were there to pick up the slack that legitimate, mainstream distributors were either unwilling or unable to fill. Whilst I can at least in theory appreciate the sense in releasing an edited version specifically for the Wal*Mart and Blockbuster crowds, releasing a "less cut" version satisfies no-one; anyone who's never heard of the film probably wouldn't want to sit through it in the first place, and anyone who does know what the film is surely isn't going to want to settle for a version missing footage. This isn't even one of those bullshit Cannibal Ferox scenarios where a cut version MIGHT be preferable since you don't have to watch animals being abused; A Serbian Film's rape, torture and abuse is all completely fake, and as such it can even be enjoyed by those crazy PeTA assholes. 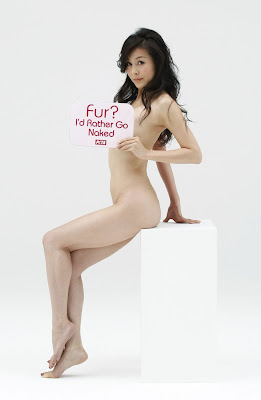 ...did we ever mention the endlessly awesome
Aya Sugimoto was also one of those assholes?
So how many cuts will there be? We don't know yet. Honestly, I'd argue that it doesn't matter how much is missing: The film will be cut for American audiences - adults who could and should make up their mind if this is the sort of thing they "want" to see no longer have that option, not even on home video. I admit it's a no-win situation, but that's exactly why so many other distributors passed on it to start with! "Go big or go home", as they say. In this case, release it uncut or don't fucking bother releasing it at all.

This news is quite unfortunate, but perhaps it was also inevitable. Not since films like Maladolescenza or Cannibal Holocaust have the barriers of good taste in the name of legitimate cinema been pushed this hard, and with the difficulty the film is having in securing an uncut release seemingly anywhere in the world, I can't imagine anyone else is going to try again any time soon. 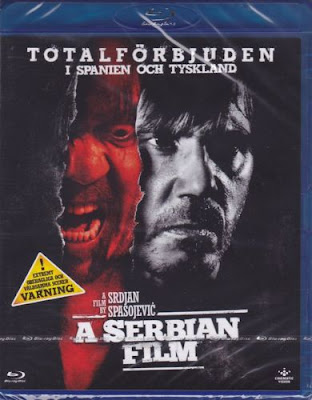 Fuk'n Banned in San Sebastian. 'Nuff said.
For those of the craziest of persuasions, these is a Norwegian Blu-ray release: Uncut and uncensored, in its' original Serbian language with a host of subtitles that'll be useless to anyone who's not Northern European. It's likely "Region B" only, but anyone with a BD-ROM can work around that... same with the lack of English subtitles on the disc, come to think of it. Wink-wink.
at 7:17 PM

But Kentai, you said the English release would be uncensored! I trusted you!

Anyway, I have seen the uncut version of this movie thanks in no small part to this blog. I'm not a fan of horror movies, but I make an exception when they're simply excellent; examples include The Thing, Alien, The Fly, etc.

This movie broke me. There are plenty of ugly movies I've subjected to myself in the past just to see if I could take it (Cannibal Holocaust, Philosophy of a Knife), but never before has a movie this ugly been so... brilliantly executed.

I'd love to wave it off as crass and exploitative, but the writing is solid and it has a point. I kind of hate myself for liking it. And perverse as it may be, I want to own an uncensored copy even if I never watch it again, purely out of respect for the damned thing.

It's unfortunate that people still feel the need to resort to censorship in this day and age, and even more unfortunate they feel the need to distort the purpose of child protection laws (I totally felt the overwhelming imitative need to rape a baby after watching A Serbian Film, didn't you?) and drudge up that old standby of 'obscenity' (an open-ended legal concept seemingly existing only to drive the cogs of puritanical witch hunts) to squash anything they don't like.

I must confess I really don't see what all the fuss is about - there are plenty of much more disturbing films out there, IMO. A Serbian Film feels sort of fake and corny to me - perhaps because the cinematography has sort of a "DV film school" look to it, and the whole thing resembles a low budget Lions Gate release.

Once the initial shock was over, the whole thing became more of a gruesome offensive joke than anything. Over the top, yes, but the entire time I was watching it I couldn't help but picture the crew giggling with glee and patting themselves on the back with how delightfully sick they thought it was.

I'm certain that streak of black humor that runs through A Serbian Film is just as sick as it was intentional. Vukmir's rage filled, utterly pretentious speech about having created a "new genre" was the defining moment for me - not the actual baby fucking before it. No one with a quarter of a brain could have written or directed that scene without some level of self-awareness and irony. It's just not possible.

Vukmir is Spasojevic, just as the producer in Emanuelle's Revenge saying (and I know I'm paraphrasing) "We're here to make a buck, not artsy fartsy bullshit!" was Joe D'amato being totally honest with his audience. And if Vukmir is the director speaking with the audience, he's in on it. But the fact that it's sick and funny is exactly why the film is such a destructive, sadistic little treat.


Out of curiosity, EvilFactor, what contemporary films would you consider more disturbing?

That is actually a Swedish Blu-ray.

I need to remember to just say "Scandinavian", huh?