The Beast Is Dead

While I wished I'd had about two weeks to check the scratch repair on my latest secret project - one I'm going to call "The Beast" for the time being - I think I did a pretty damned good job in half that time. The final pass of color correction is being encoded to a lossless file as I type, and a DVD encode will follow thereafter.

The Beast was far less nightmarish a source than Mystery Project X, being a telecine made specifically for DVD about a decade ago, and as such were anamorphic and had (mostly) clean 3:2 interlacing patterns... and that's about where the positive qualities end. They were pulled from a print with cue-marks, likely a combination of a vaulted IPs, and being from a decade ago I wouldn't be surprised if these were "Master Positives" (aka Answer Prints) made roughly thirty years ago. (There is actually another print of The Beast kicking around on video, but man, that thing has problems all of its own...)

The prints were kept in fairly decent shape - this isn't an old grindhouse quality print or anything - but the color accuracy was weak, contrast was blown out, and they tried to mellow out the harsh grain with some Flintstones era DVNR. What's weird is that the DVNR zeroed out only certain frequencies; reds had zero grain of any kind, greens had a crawling quality and a lot of low-frequency noise, and yellows were absolutely alive with buzzing analog texture. More of this grain than I'd have liked wound up getting smoothed away due to a number of factors, but as these are vintage IPs they're not what a "proper" restoration of the negative would look like anyway.


Every effort was made via framing and color correction to preserve the original, intended "look" of the work - and no, I'm pretty sure that emulsion scratches and dirt embedded into the print was never a part of the director's original intent. I mean, yes he's crazy, but there's yet to be anything to suggest that he's so crazy he'd demand that the nics and scuffs on the 35mm prints be preserved for generations.

I've spent the last week mostly applying varying levels of scratch repair to different sections of the film, finding shots where the results I was getting back was doing more harm than good, and adjusting the processing as needed. The second half of the project especially was covered from head to tail in negative damage, and considering how pretty a film The Beast can be, that's a real shame. The first half has some flickering, which has changed into more of an odd banding pattern thanks to the natural properties of DSR, but as this was mostly an issue on optically printed special effects already caked in layers of dirt, I think it was the right way to go.

...Jesus Fucking Franco on a pogostick, I wrote that status blurb a week ago and I've been up to my arshole in related uber-OCD production work ever since! 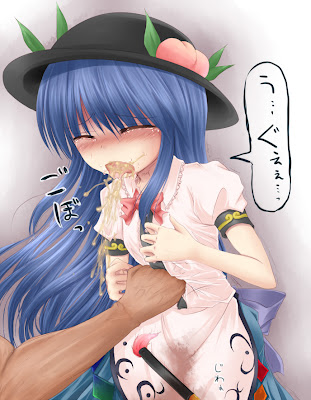 Yeah, fuck Facebook.
THIS is my "current mood".
It's official: Subtitles are done, too. Short of the files simply not working, or a reel having gone accidentally out of sync, or, fuck all else, The Beast can finally be lain to rest. I'll spend a day or two to let my shattered psyche heal and then jump right back into an epic DVD related mine field... what can I say, I love my work. And eating. I goddamn love that feeling of knowing I don't have to not-eat as a means of saving money.

And speaking of being a fatass... 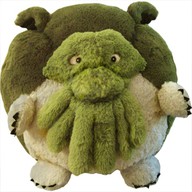 Just to ease my aching skull, here's a picture of something awesome Mrs. Kentai bought me. Don't worry, beings who still have souls to be raped and consumed like so much delicious party liquor, he's actually far more squishy and less derpy in person. You'll WANT to go crazy over the Squishables Cthulhu, guaranteed! I've got the 7", and love it--