Dance Away Your Censored Sorrow 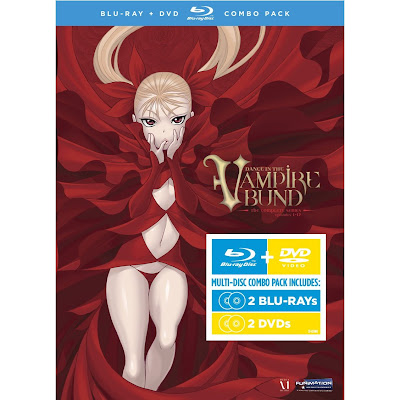 Nina to no longer be Shafted.
So, here's the good news; after a whole lot of awkward finger-pointing and humble pie guzzling, FUNimation has agreed to release Akiyuki SHINBOU's controversial vampire politics/lolita complex horror anime Dance in the Vampire Bund completely unedited and uncensored. As with Ga-Rei Zero, the series will be available in a rather ridiculous DVD + Blu-ray collection, with a sturdy chip-board box for the first pressing (for a fairly reasonable $5 mark-up).

Extras include the awesomely misleading original promo video, TV spots, textless opening and closing animation and "Intermissions 1-12". I'm not actually clear on wither that's the SD broadcast episode previews or those funky animated manga panels from the JP Blu-ray. Notably missing are the various staff and cast interviews available on the Japanese release, and it would have been fun to have the broadcast-only Episode 7.5 "Holy shit, we need an extra week to finish this episode!" stalling-tactic recap with some exclusive book-end footage, but hey, this is the hand we're dealt.

The bad news is that, while the home video version might help, the show is still something of an epic clusterfuck spurred on by creator Nozomu TAMAKI, who wanted the TV series to be "something different" while Shinbou and his alumni at studio SHAFT seemingly just wanted to adapt the manga as it was. A lack of firm structure combined with obvious budgetary and/or scheduling conflicts led to one of the most stilted and incomprehensible titles from a director who, let's face it, is actually known for being kinda stilted and incomprehensible. It's unfortunate that when he's awesome he produced Dario Argento influenced scat porn and dialog-driven monster mashing oddities, because without a firm history of mind-blowing insanity behind him I'd have given up on this title half way through without hesitation.

Still, for the $42 it's selling for on RightStuf for the next 24 hours or so, it might be worth reveling in a fascinating experiment... even if it didn't ultimately meet with total success.
at 3:55 PM