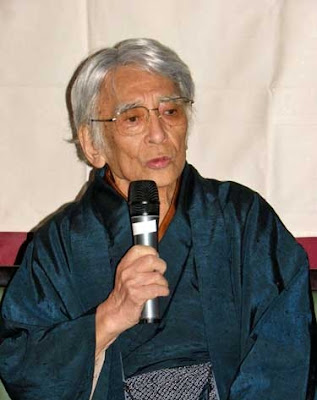 16 April 1931 - 6 May 2011
50 years of binding hearts in rope comes to a close.
The notion that post-WWII Japan is a country populated exclusively by barbaric and deviant misogynists is a stereotype we can almost single handedly attribute to this late writer of pulp erotica, ironically, a man said to be of great emotional sensitivity with a painfully vanilla sex life. He was first published under a different pen-name in 1961, and spent the next 50 years sharing his debauched imagination with the Japanese public, getting international celebrity primarily through the cinematic adaptations of his works starting in the 1970s.

Oniroku's influence on the intelligently darker side of pop-culture will be sorely missed. At least this sad news has brought one good thing to my attention: Seasons of Infidelity, translated into English. Perhaps not the title I would have most preferred to see brought over, but any and all Oniroku available in my native tongue is something to mourn properly with, and I only hope we'll see more in time.
at 5:53 PM

Very interesting information, may be useful for everything