Escape From The Print Damage 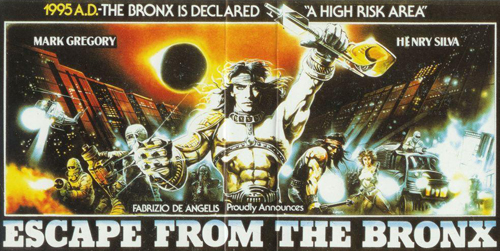 So I finally got my hands on a copy of Enzo G. Castellari's 1983 action film BRONX WARRIORS 2/Fuga del Bronx... and was immediately horrified by what I saw. I don't think it's unfair to say any real "restoration" that went into this release was putting a band-aid on a limb cut off with a dull hacksaw, and having long thought the prior film in the series, 1990: The Bronx Warriors was sort of the definition of badass Italian knock-off cinema, I can't help but feel like the sequel deserves substantially better than it got... and yes, I'm saying that knowing full well that Enzo himself wasn't thrilled about being the guy to make it, but come on! The original Inglorious Bastard himself basically ate awesome and crapped kick-ass until Rome's film industry collapsed at the end of the 1980s.

Oh sure, the Shameless UK DVD is uncut, anamorphic and the best looking print available... but it's always the little things, like decent scratch repair, that make all the difference.

SEE FOR YOURSELF
(41 Mb, compressed at 720x480 with x264)
Now don't get your hopes up, this won't be my next DVD-R or anything - I'm just fussing around with it as a few other things settle. I'm having a lot of fun exploring some freshly tweaked scripts here, and I'll probably give it some final spit-polish in Sony Vegas before all is said and done.

Sony Vegas: It's like Final Cut Pro for us guys who are Mactarded!
at 8:37 AM