Less than a week ago a friend of mine asked if Tom Six's bizarre horror independent film Human Centipede (First Sequence) was worth watching. In the end, all I could do was shrug and say that it was "different" from anything else I've ever seen before - it's a serious, relatively thrilling little piece of work, I'll certainly give it that. Even just being "different" is modest praise, since I watch my share of gonzo-ass horror films, but the whole thing felt like a great concept that left itself with nowhere to crawl. My wife also sat through it end to end (to end), which is more than I can say for Cronberg's Crash or the original Texas Chainsaw Massacre... so either the notion of becoming a faceless assless shit-monster is less blatantly repulsive than wound fucking and being chased by a giant retard with power tools, or Mrs. Kentai is kinkier than I'd realized. I'll have to look further into that possibility... 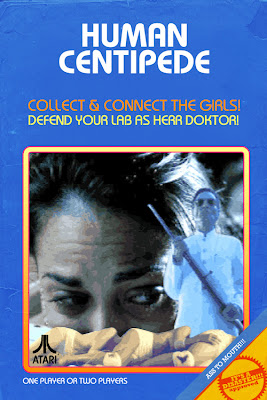 Yeah. It was this, or that "Dark Side of the Centipede" LP cover.
Touting medical accuracy as the height of debauchery, the film sews three victims ass-to-mouth into a writhing blight against God that feasts on its' own shit, and exists solely to amuse its' creator, a mad scientist (easily the film's best asset, German character actor Dieter Laser). The film - much like the iconic "monster" - is an experiment solely for the sake of it, an engaging and surprisingly smart vehicle for a really grotesque idea that's just clever enough to squeeze every ounce of thrilling potential escape and sacrifice it can, but in the end paints itself into a depressing little corner. It's not a bad film, but it's neither the scathing assault on the senses I'd hoped for nor the sort of "fun" extreme gross-out movie you could theoretically build a drinking game around. It's in its own little fecal-fed world, and while I respect that, I can't say it ever touched me in an appropriate place as I'd so dearly hoped it would.

The BBFC has a pretty strict policy against letting films that glorify sexualized violence getting into the hands of the public (for fear that they'll become baby raping serial killers IMMEDIATELY after viewing it... I guess). Keep in mind that A Serbian Film was chopped to pieces in Merry Old England (also Ireland, Scotland and probably Wales), but they still didn't up and ban the damned thing. So what's so awful about this not-yet-released Independent Film Channel produced schlocker? Well, I'll let the official BBFC statement fill you in... and it should go without saying that MASSIVE spoilers are in the blue text below:

"The BBFC has rejected the sexually violent, and potentially obscene DVD, The Human Centipede II (Full Sequence) This means that it cannot be legally supplied anywhere in the UK. The decision was taken by the Director, David Cooke and the Presidential Team of Sir Quentin Thomas, Alison Hastings and Gerard Lemos.


The Human Centipede II (Full Sequence) is a sequel to the film The Human Centipede (First Sequence), which was classified 18 uncut for cinema and DVD release by the BBFC in 2010. The first film dealt with a mad doctor who sews together three kidnapped people in order to produce the human centipede'of the title. Although the concept of the film was undoubtedly tasteless and disgusting it was a relatively traditional and conventional horror film and the Board concluded that it was not in breach of our Guidelines at '18. This new work, The Human Centipede II (Full Sequence), tells the story of a man who becomes sexually obsessed with a DVD recording of the first film and who imagines putting the centipede idea into practice. Unlike the first film, the sequel presents graphic images of sexual violence, forced defecation, and mutilation, and the viewer is invited to witness events from the perspective of the protagonist. Whereas in the first film the centipede idea is presented as a revolting medical experiment, with the focus on whether the victims will be able to escape, this sequel presents the centipede idea as the object of the protagonist's depraved sexual fantasy.


The principal focus of The Human Centipede II (Full Sequence) is the sexual arousal of the central character at both the idea and the spectacle of the total degradation, humiliation, mutilation, torture, and murder of his naked victims. Examples of this include a scene early in the film in which he masturbates whilst he watches a DVD of the original Human Centipede film, with sandpaper wrapped around his penis, and a sequence later in the film in which he becomes aroused at the sight of the members of the centipede being forced to defecate into one another's mouths, culminating in sight of the man wrapping barbed wire around his penis and raping the woman at the rear of the centipede. There is little attempt to portray any of the victims in the film as anything other than objects to be brutalised, degraded and mutilated for the amusement and arousal of the central character, as well as for the pleasure of the audience. There is a strong focus throughout on the link between sexual arousal and sexual violence and a clear association between pain, perversity and sexual pleasure. It is the Board's conclusion that the explicit presentation of the central character's obsessive sexually violent fantasies is in breach of its Classification Guidelines and poses a real, as opposed to a fanciful, risk that harm is likely to be caused to potential viewers."

Tom Six has been refreshingly vocal about the whole thing, too, with the following rebuttal through Empire Online after they spoiled the living shit out of his top-secret project, the trailer of which doesn't feature a single frame from the actual film:


"Thank you BBFC for putting spoilers of my movie on your website and thank you for banning my film in this exceptional way. Apparently I made an horrific horror-film, but shouldn't a good horror film be horrific? My dear people it is a fucking MOVIE. It is all fictional. Not real. It is all make-belief. It is art. Give people their own choice to watch it or not. If people can't handle or like my movies they just don't watch them. If people like my movies they have to be able to see it any time, anywhere also in the UK."


Truth be told, I'm not sure how I feel about all this... Mister Six proved he has a talent for the retch-inducing, and if you need concrete proof that he's made even a minor dent in the pop-culture landscape, even South Park recently dedicated an episode to using the Centipede as a way to mock Apple. Going in the direction he has here is about the only direction that's left, short of remaking the first film verbatim - and who the hell would want to see that? (Except the lead in the sequel, I guess.)

Lack of sensible alternatives or not, going in that direction two years after the original film might be too much, too soon. Craven had to wait a decade before he could pull that shit with Freddy Kreuger, and in that instance the character become such a ridiculously franchised sensation that he was more or less on all fours with his ass in the air, begging for a little post-modern reaming. I honestly think Six might just be trolling his critics on an epic scale here, and if that's the case, I wish him nothing but luck with that... I just hope his film has got more up its sleeve than the BBFC are giving him credit for.
at 5:26 AM