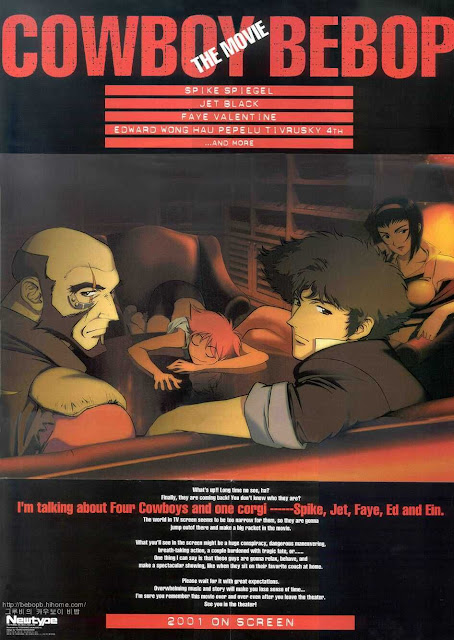 Gary Oldman, Dakota Fanning, Keanu Reeves and Asia Argento (circa 2003)
Don't pretend you weren't thinking about it before Fox made it a horrible possibility...

If you're even remotely interested in anime, odds are you've got your pre-order in for Cowboy Bebop The Movie: Knockin' on Heaven's Door/劇場版 カウボーイビバップ 天国の扉. The street date is June 28th, and the MSRP is a criminally low $17.97. The JP release will set you back over five times that price, and there's no English audio or subtitles to boot. Like the rest of the world I figured this'd be a sweet deal, and a nice HD treat to tide us all over until Bandai gets their shinola together and releases the TV show on Blu-ray...

Unfortunately, we can't always have nice things. Not for under 7,800 yen, at least. Having bought the rights to release the film domestically from Sony Pictures Classics in 2010, Image re-released the 2003 Special Edition DVD verbatim - even the case is virtually identical. This means that Image clearly has access to Sony's materials, and as such likely has every opportunity to do the film justice. I mean yeah, we'll never get the on-screen original subtitle "Knockin' on Heaven's Door" in the states over legal concerns with Bob Dylan, but that's a small price to pay in the long run for a fun slice of Space Cowboy adventures.

Sadly, it's now confirmed (even by the official site) that the Image BD has bit two very big problems:

Cowboy Bebop's movie was just as advertised; a legitimate big-screen production, with a legitimate 5.1 surround mix. Even the TV series was given a full-blown surround revival, so the fact that the most expensive and dramatic entry into the franchise has been clipped into a track fit for goddamn laserdisc is nothing short of baffling. None of the DVD releases of "The Movie" in Japan or the 'States have ever included a stereo downmix, much less at the cost of the original surround track, and the Blu-ray is certainly a piss-poor place to start!

The extras are arguably less of a cause for concern, but further illustrate how hard Image is willing to half-ass these $18 Blu-ray releases. To Sony's credit, they crafted a six-part documentary with the localization team, some storyboard comparisons, and included the following deliciously goofy trailer...

It may be too late for Spike and pals, but rest easy knowing this is the only anime title Image Entertainment has to offer. Once this is over and done with, we just have to keep an eye on Sentai Filmworks, Bandai Entertainment, FUNimation and the rest of the usual suspects.

Sadly, this has set a pretty miserable precedent for the multitude of Anchor Bay and Something Weird titles they've got lined up for the rest of the year... call me crazy, but I can't imagine them treating The Hills Have Eyes and Blood Feast any better.
at 9:28 AM

I'm waiting till it ships until I get too annoyed. Image is known for erroneous/incomplete disc specs in their solicitation materials.

Someone on the Blu-ray.com forum has already confirmed the specs using the actual retail disc. Sure he could be full of shit, but why bother making this sort of thing up?

For what it's worth.

Hey, just wanted to drop a line and let you know I just got my Blu-ray from Amazon. Indeed, there are no extras, and both audio tracks are PCM stereo.