If anyone was ever dumb enough to ask "What's the most ass-kickingest movie ever made?" out loud, they didn't live to tell about it. You know why? 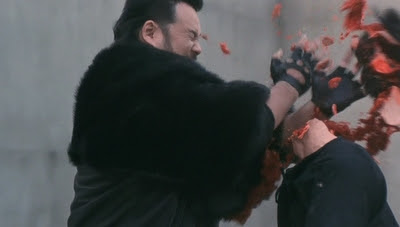 'Cause then this happened.

力王/RIKI-OH: THE STORY OF RICKY was the 1991 film adaptation of the saliciously grotesque ongoing manga, simply titled "Riki-Oh", written by Masahiko TAKAJO and illustrated by Tetsuya SARUWATARI. The manga is sort of the unofficial satire take on my own beloved Fist of the North Star. The hero, a cultured and honorable young man named SAIGA Riki-Oh, is imprisoned in a corrupt jail for the cold-blooded murder of a local crime boss. While in prison he's forced to fight his way through the four inmates who really run the joint - fighters so desperate to take Riki-Oh down with them they disembowel themselves and use their organs as weapons. When he takes care of the lot of them, he takes down the warden, who's The Incredible Hulk... no, not actually the Marvel Comics Hulk, but one Takajo made up himself. After destroying the corrupt system, Row Row Fight the Power and all that, he literally punches through the side of the fucking prison and walks off a free man. 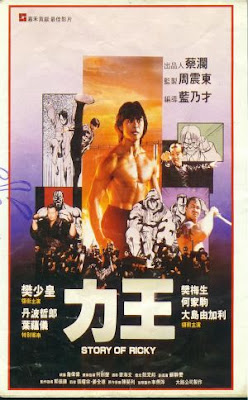 It's not all roses on the outside, though: After taking down some Neo-Nazi soldiers interested in recovering the Lance of Longinus, he signs up for the Kumite and fights The Terminator... yes, he basically fights a metal-faced Arnold. But their battle is interrupted by Riki's long lost twin brother, Nazi, who's not only a super powered Jesus lookalike who's being managed by M. Bison, but is also the reincarnation of Hitler and will bring about the fall of life as we know it unless Riki kicks his ass. I swear I'm not making a word of this shit up-- the entire 12 volumes of manga has been translated by the good folks at illuminati-manga. Just read that shit after I'm done jaw-flapping at ya, I'm going somewhere with this.

The 1991 Lam Nai-Choi film, Riki-Oh: The Story of Ricky, adapts the first storyline with Riki-Oh fighting his way through the wicked prison inmates. It basically defines the very notion of the word "epic", and is every bit as great an action movie as a Sonny Chiba marathon and every bit as gruesome as all of Peter Jackson's early movies put together. It positively bleeds manly greatness. If you don't like this movie, we can never, ever be friends. I don't care if you were the best man at my fucking wedding or helped me bury my own brother's corpse - you say one word about Story of Ricky being anything but the greatest achievement in cinematic history and I'll promptly kick your candy ass square in the junk and walk away, never to speak to you again.

So here's the good news: Blu-ray is SET TO DROP this Setpember at the ridiculously low MSRP of $21! The bad news... well, just look who's releasing it.

Due to the endless awesome this title exhudes from every gaping wound, I'm buying this fucking Blu-ray. But Media Blasters has been incredibly hit or miss on the format, so I'm not convinced I'd recommend others pre-order unless they're willing to take the gamble on this being an utter trainwreck. Yes, Fortune Star did an HD remaster a couple years back and released it on DVD, but not only have they since released a number of hastily-upscaled SD masters straight to Blu-ray, but that DVD was no looker. 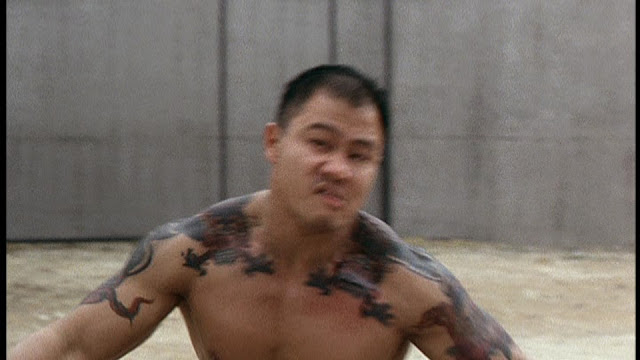 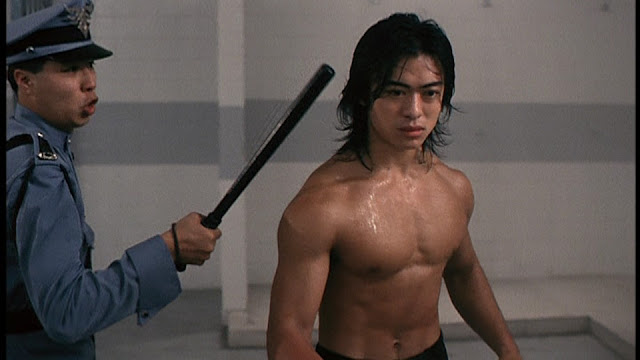 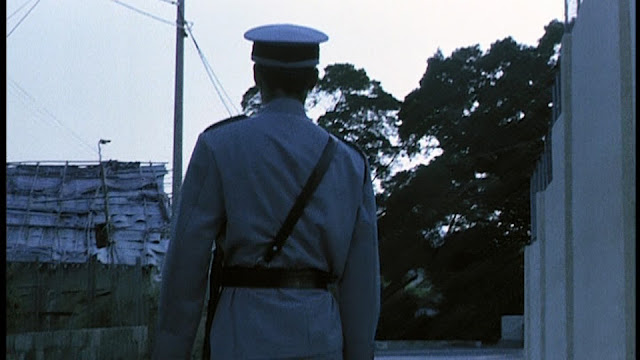 The caps might not actually look as bad as the DVD does in motion, since it allows a certain level of grain through the DVNR... but that grain is frozen in place, like a blanket of sand-paper over an otherwise moving image. You can see *some* grain around moving objects, an odd sort of sharpened-ghosting (check out the billy club for a great example), but on stationary shots there's no organic movement whatsoever. It gets especially bad in the bathroom when the titles just sort of blend and blur together, only becoming a clear grid again when the camera stops moving. Wither or not the transfer is "better" than the HKL UK DVD is up for interpretation, but if this is the only HD master out there, I assume it's the one Media Blasters is getting... and that doesn't fill me with confidence.

How's this going to play out, Media Blasters? Am I going to sing your praises and compare this 20th anniversary event to being fellatiated by God himself?  Or am I going to have to rip it a new fist-sized asshole for being on par with Versus, Ichi the Killer and other fucking awesome movies you've shat out on poorly upscaled "High Definition" releases?

The rock's in your court now, Sirabella. Wow me. But don't do it for me (not that you would), do it because this movie rightly deserves every ounce of love and care that Citizen goddamn Kane has been given over the last 70 years. Riki-Oh: The Story of Ricky is the absolute pinnacle of splatstick/kung fu anime inspired madness, and no film has even even TRIED to steal it's title in 20 years. If you're willing to pay for a new HD master for a pile of convoluted knock-off bullshit like Zombie Holocaust, the least you can do is go balls out for this authentic masterpiece of whatthefuck cinema.
at 8:40 PM

I was so fucking excited when I read the title of this post, then my heart sank when I read 'Tokyo Shock' on Amazon. The Media Blasters DVD was ass, so I can only imagine what the Blu-Ray is going to look like. Riki-Oh should be getting released as part of the Criterion or Masters of Cinema collections, but I'd settle for the capable hands of Don May Jr. and the good people of Synapse... if only he had picked up the rights.

For under $15 to pre-order, I'll give it a go, and while I'm interested in seeing the end results I have to admit that I'm not expecting much. 'Better than the DVD' would be a good start, but given how craptastic that was it's not much to aspire to.