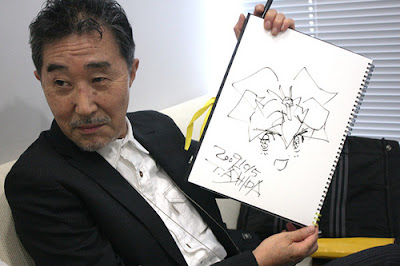 April 21, 1944 - July 23, 2011
You saw 199X and beyond, Tough Boy.
Toyoo ASHIDA may not be as crippling a loss to the creativity of the Japanese animation industry as Satoshi KON was last year, but he was still quite notable for being one of the few animators in the country to push for fair treatment towards commercial artists. He was not only the co-founder, but president for the first ever Japanese animators union, JAniCA, in 2007. He also founded Studio Live in 1976, a company that continues to both produce, and contribute to the creation of, contemporary animation.

On a slightly more personal note, he was also the director behind my beloved Vampire Hunter D OVA, as well as series director for Hokuto no Ken: Fist of the North Star, and of course the director of the unforgettable 1986 Fist of the North Star: The Movie. These films remain very dear to me, and I'm just as enthralled by them as I was the very first time I watched them in the early 1990s. Ashida may not have been in the forefront of the modern anime industry, but he will be missed none the less.

I wonder how much it'd cost to get that now-final Hokuto no Ken interview with him from the R2  movie booklet properly translated...
at 6:09 PM

For me this loss is every bit as tragic as when Teruo Ishii and Akio Jissoji passed away. It's true that we're not being robbed of any future anime greatness because he hasn't been actively involved in something I am aware of since AMON: APOCALYPSE OF DEVILMAN (and I'm still not sure as to what exactly his involvement was on there) but I feel like he was very much under-appreciated. The fact that the '85 VHD is still only available on an ancient and craptacular 2001 DVD in Japan is a painful reminder of that.

Can you point me in the direction of his interview in the aforementioned R2 booklet?

The last two pages of the First-Press Toei R2 DVD booklet included with the FOTNS Movie feature a lengthy interview with director Ashida about the film.

Ashida directed SOUTEN KOURO, a historical drama about Chinese warlords, as recently as 2009. The fact that I've never heard of it prior to this week makes me curious if it's actually bad, or simply doesn't suit the typical fansubber pallet?

He also directed the largely forgotten 恐怖のバイオ人間 最終教師/ULTIMATE TEACHER, which is a fun, bizarre, and obviously late 80s slice of absurdist gag comedy. It's certainly no Project A-Ko, but it's pretty damned amusing in its' own right.