The Most Baffling Anime License News of the Year, Easily.

NIS of America, best known outside of gaming circles for releasing deluxe/oversized collector's box sets of shows too uniquely Japanese in tone for a US release otherwise, have announced that they're going to be releasing the utterly bizarre Dororon Enma-kun ME~RAmera/Dororonえん魔くん メ～ラめら series, under the suitably goofy English moniker of Ghastly Prince Enma Burning Up.

There really aren't any words to describe how pleasantly shocked by this announcement I am. NIS has just made a push for DVD/Blu-ray combos on the equally (if uniquely) bizarre shows Arakawa Under the Bridge and Katanagatari ("Sword Story"), so while details are restricted to "We don't know WHEN we can release the show, just that we are...", there's still some hope that we'll see Enma-kun's bare ass in 1080p on American shores within the next year.

Join me, friends, and together we can finally make my dream come true of giving Go Nagai all of our money! 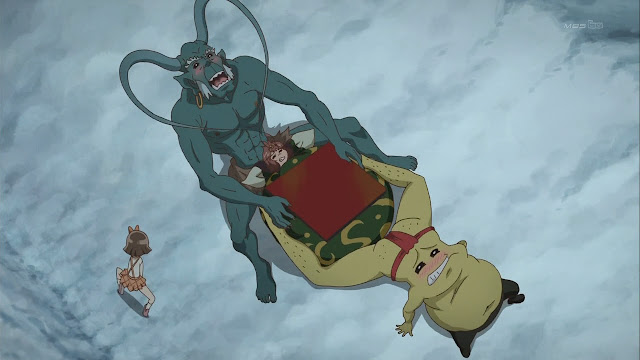 Have you sampled any of NIS' Blu Rays yet? On their own forums people are complaining that the English subtitles are way too small for the average human to read. NIS are apparently looking into it.

I've yet to pick up any NIS titles, though I've been eyeing KATANAGATARI. I should get off my ass before the Limited Editions sell out, but $100~ for a show I haven't seen yet and was going to buy based on a vaguely related title from the same author... well, it's enough to make my toes curl!

The forced-subtitle issue is a minor one in my eyes; it wouldn't be the first time Japan demanded it to curb the phantom threat of reverse-imports, and I'm damned sure it won't be the last.

I've seen a screenshot of their BD subtitles and don't think it's all that tiny... on the small side, sure, but I can't imagine those being unreadable at any sane viewing distance.

Perhaps I've spent too much time squinting at subtitled Hong Kong film prints to really notice when subtitles are "unreadable"?

The burned-in subs aren't ideal but it's not like I can speak or read Japanese... and at least NIS is completely up front about them. I just worry about the font size because I have god-awful vision and I don't want to destroy it further for 50+ bucks!

Wait, are the subtitles on their Blu-Ray's actually burned into the video or are they simply a subtitle track that you can't remove?

The subtitles are still player-generated, they're just "forced" in that you just can't turn them off with the remote or menus.