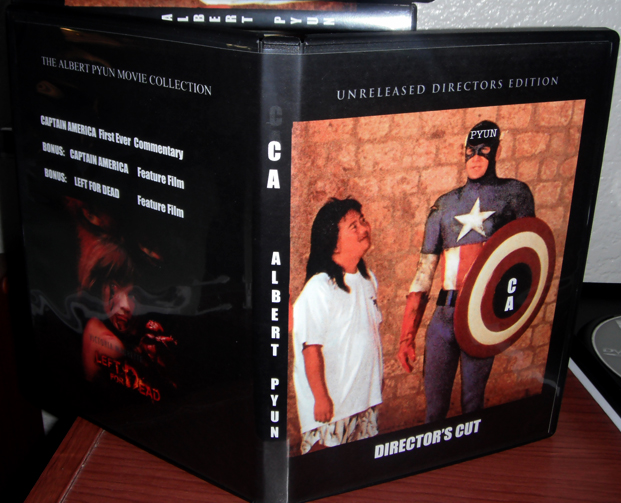 God, I still love this cover. It's like the Anti-Criterion Collection.
It's amazing what you can miss when you only check your eMail every two or three days, isn't it? In my case, I completely missed a message from Curnan Pictures, the company that's handling the Captain America Director's Cut Blu-ray of, uh, questionable reputation... relevant highlights can be found below:

CA:DC was telencined in 1988 from work tapes and a 35mm work print. There is artifacting on dark scenes, dust, and visible splices...
Some people have ordered the Blu-Ray disk because they wanted durability of a stronger disk...
If case you don't know, MGM is releasing the original theatrical version on DVD, July 19. That picture will likely be better than Albert's version..

And so on. That doesn't completely excuse the fact that the Blu-ray has some major video problems that it simply should not - namely that whole weird BOB deinterlaced thing that fucks over the entire flick - but it DOES mean that, were I not Mr. Fucking Oblivious, I'd have known beforehand that the entire film wouldn't be sourced from a 35mm workprint. My biggest beef with this release was the fact that none of the advertising for it came out and admitted it, but Curnan Pictures themselves did, and I literally didn't notice. They even straight up told me that a better quality release is just around the corner, and with all the bullshit big Hollywood studios do of withholding material just to put it on the Super Ultra Special Edition they won't mention until a month after the first release comes out, that's a level of honesty you can't buy.

I won't take back what I've said about the quality of the release itself - seriously, the transfer stinks - but I will say that Curnan Pictures has been nothing but honest and accommodating with their product, and that means quite a bit to me. The release are neither cheap nor pretty, but Albert is clearly cramming his heart and soul into these old workprint sourced discs, and even if they're ass-ugly I'd rather he got my money than the clods at Video Search of Miami or whatever other gray area traders would sell copies that look even worse still. I still think that offering the CA:DC on Blu-ray might have been biting off a bit more than they can chew, but at least I can't accuse them of upselling it.

I'm just going to keep my fingers crossed that we see a Director's Cut of Radioactive Dreams from these guys eventually. Sure would be nice if that looks better than the CA:DC, though.
at 7:30 PM