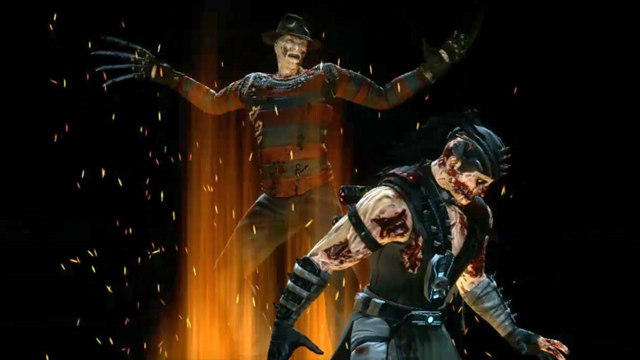 Fine, I'll admit it. The only part of this that really pisses me off is that it's that stupid naked-mole-rat looking Jackie E. Hayley remake Freddy, and not the Robert Englund version we all know and love.

There's no two ways about this one, Kreuger is and will always be Rob Englund, a man who's performance was so iconic he basically couldn't get a serious role unless they found a way to work in his scarred-up Freddy face anyway. I can forgive the two gloves, if for no other reason that Freddy's cutting up warriors instead of molesting children to death. Yeah, that was the backstory for New Line Pictures' big franchise maker: He diddled children with blades until they died. Let's see that pussy Ghost Face top that.

The official trailer for Freddy Kreuger: The DLC doesn't have any dialog - not even a goddamn wisecrack! - so I can only assume that we have a JEH impersonator doing an impersonation of Englund twice-removed... ew. With all due respect to the perfect Rorschach, his interpretation of Kreuger struck me as a shallow, limp echo of Englund's original portrayal, which started out as a looney tunes parody and ended as a seething, wrath filled horror that's gone sadly underrated ever since the sequels turned him into a walking joke that kills stoners with the Nintendo Powerglove. Yeah, that actually fucking happened.

I didn't write a review up for the 2010 ANOES for the same reason most long-term prison convicts don't write a review of their anal raping; talking about it isn't going to make the pain in their asses go away, and as I'm not yet sure if the film gave me AIDS or not, I really don't want to talk much about it. But even had Hayley rocked the role all up in our faces, that remake was a poorly planned pile of shit that simply stole the best set-pieces from the original and made them substantially less effective with crappy CGI. It's like asking a talented captain to fly a plane without wings - at this point it doesn't matter how awesome he is, we're all pretty much screwed. I may not especially like that 2003 Texas Chainsaw Massacre remake, but at least director Marcus Nispel tried to make it his own and gutted the concept down to the bare bones in an attempt to create a film that wasn't just checking off a bulleted list of shit the original did. It all may not have worked the way I'd have liked it to, but it was substantially more interesting than watching him simply reshoot the first three Jason movies and boil them down to one new film with (essentially) the same archetypes and bloody gags that have thinly defined the franchise for 30 years. The ANOES remake is so goddamn phoned in that Michael Bay might as well use it as an example to publish a "Remake By Numbers" book... thank fuck they never got around to remaking Rosemary's Baby.

Still, this is nowhere near the dumbest character in Mortal Kombat history, and I'd happily rend flesh from Sub-Zero's bones as even this bastardized beast of Craven's father-complex riddled imagination over Naruto filler villain looking crap like this: 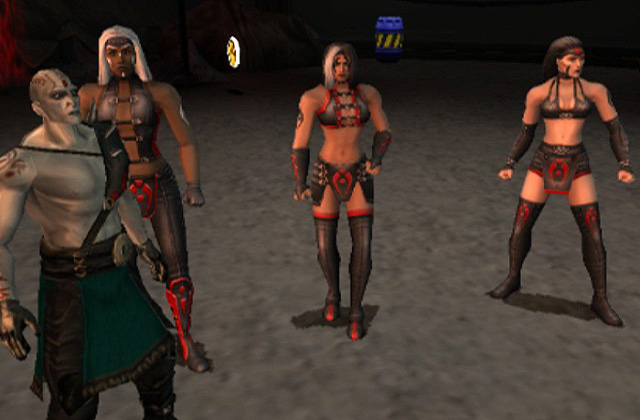 This actually happened, too.
These days, Michael Bay's Platinum Dunes company owns Jason Vorhees (and Leatherface! *sigh...*) so those of us waiting with a freshly lubed fleshlight to re-enact the final reel from Ronny Yu's appropriately titled slugfest of a motion picture are probably out of luck. Jason shot a spear in "Part 3-D", right? Just cross your eyes until Scorpion kinda looks like a rotten goalie. That's about as good as it's probably going to get.

And to everyone who was bitching about Kratos being "dumb" because they only had an Xbox and thus couldn't get their hands on him; butthurt much? For fuck's sake, I'd rather Kratos REPLACED Quan Chi. They're the same exact character except Kratos is about 70% less bitch.
at 1:18 AM

I can only express a word of thanks, nothing else. Because with the content on this blog I can add knowledge Thank you very much has been sharing this information. Do not forget to visit our website to share information and knowledge about health
cara mengobati gatal gatal
cara mengobati penyakit kuning

The article was very interesting to read, thank you for sharing the information