After an oddly silent period concerning the aspect ratio of Dragon Ball Z: Level 1.1, the Otakon trailer has revealed the release to be a brand new HD telecine in the original 4:3 ratio, with a host of "proper" restoration methods including manual scratch repair.

But don't take my word for it - watch a bootleg of THE OTAKON TRAILER!! 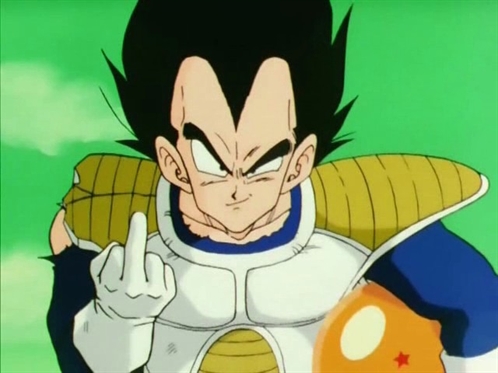 "Eat it, Kentai."
Goddamn Fukunaga, this news just got substantially more interesting. I'm still a little dumbfounded though - why WOULDN'T you have pimped up the fact that this is a brand new film scan in the original aspect ratio, like, the second you admitted you ready to quintuple-dip this franchise? That's kind of the one thing that could possibly make this announcement not make you guys look like total biters, so I just can't fathom why you'd keep the single most important detail quiet up until now.

The fact that the restoration is being handled by the same Texan film lab and even the same colorist that totally fucked up your last attempt doesn't really fill me with confidence... but hey, I'm damnably curious to see if you've all learned from prior mistakes. You can stuff those Orange Bricks, but maybe I'll take a peek at the first set and see if you've all legitimately gotten a clue since 2007.
at 4:49 PM