Gary Tooze over at DVDBeaver have just posted an EARLY COMPARISON of my dear, sweet Cannibal Holocaust. And with all due respect to DVDBeaver, their screenshots can be a little hit or miss - for example, their recent review of The 10th Victim has actually softened out quite a bit of noise on the screenshots, making the images look a bit less garish than the disc really is. So while I don't intend to hold this up as the definitive comparison, I imagine it's somewhere in the ball park... and if so, I'm calling this one a technical foul.

The entire forest floor is basically a big green mush! There's no grain, nor any delineation between leaves - it all just kind of screams thick 'n' chunky DVNR, with a spattering of MPEG-4 blocking on top for flavor. This is only Shameless' second BD release after The New York Ripper (and they're both cut - thanks, BBFC!), so with very little of their work available I'm almost trying not to assume this is their doing by default; the Italian DVD released in 2004 claims to have been restored in High Definition, and I have little doubt that they've dusted those materials off once again for this release, too. That said, the screenshots on Gary's comparison have a lot of blocking. Wither this is the fault of the caps being recompressed for bandwidth or the actual 23 Mb/s transfer, I don't yet know.

I have little doubt that the 80 odd minutes of brand new special features will be of interest to some, but I think I'm going to sit this one out. 17 POUNDS may not exactly be a fortune for an import Blu-ray, but it's still a bit more than a censored and less than inspiring looking print is worth to me these days. 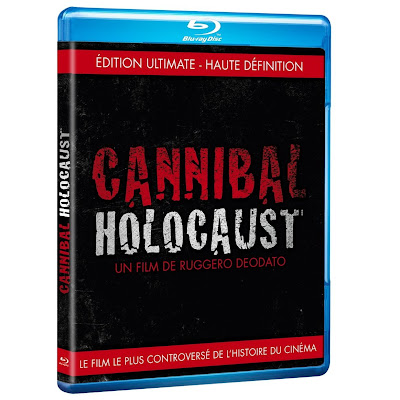 Sacré bleu!
Anyway, if you're still jonesing for a not-censored High Definition release of Cannibal Holocaust, FRANCE HAS GOT YOUR BACK. I have little doubt that it'll be made from the same materials as the UK release, but only time will tell if it has the same nasty, smeared look to it. There's also no word on region coding or forced subtitles, but it'd be almost unthinkable for a flick shot with English sync sound to not have the "original" dialog track on a French video release. As details emerge, I'll be sure to let you all know. And, yes, it's likely that all BD releases will be missing about 10 seconds from the "Road to Hell" sequence outside of it being presented as a VHS sourced deleted scene - we're just going to have to make peace with that, I think.

Keep in mind that word is Grindhouse Releasing is recording brand new material for Cannibal Holocaust. We will get an uncut Blu-ray here in these United States... just, knowing Sage and pals, probably not any time soon.
at 10:40 AM

I'll wait for the French blu ray. The UK blu ray definitely looks on the soft side, plus it is censored, so why bother. Hopefully, we will see more detail on the French version. I never much cared for the Grindhouse Releasing dvd version. It looked too dark to my eyes. Plus, there was something off in the colors and contrast compared to the various European releases.

I think had the release looked stellar I'd have swallowed my principles and bought it anyway, coati-gutting or no. I'm still curious to see the Deodato Approved Director's Cut(TM), just to satisfy some level of morbid curiosity, but I'm sure there are still "other ways" to do that...

The Grindhouse Releasing DVD transfer is vexing, I think. In some ways it's notably better than the Italian restoration on DVD - more natural grain, better black levels and so on. Unfortunately the color timing varies wildly from scene to scene, and the compression was fucking rank - I ignored it for quite some time, but once I sat down with the EC Ultrabit for comparison's sake I simply couldn't un-see it. The sequence where Alan and his crew set fire to the hut is a sea of grotesque MPEG-2 block artifacts, and it's just one of many scenes that weak compression make borderline unwatchable.

That said, I'm curious which color timing is more 'accurate' - a loaded question when we're already talking about a revisionist cut of the film itself, I know. The 16mm footage looking so dingy and yellow would actually make some sense, in the scheme of the narrative, but did Deodato have it shot that way on purpose? Or did Grindhouse go out of their way not to perform even basic color grading on thr 16mm footage as a way to "enhance" the look of the found footage?

I keep waiting for Grindhouse to do some BDs. Didn't one of the guys work on the Evil Dead BD? Which, of course, is a benchmark release, visually.

But man, I'd love to have some of their titles on the format. The Beyond, Cannibal Holocaust and Ferox, I Drink Your Blood (a personal favorite; this flick is so damn fun!), Pieces...and I keep anticipating releases for Gone with the Pope (which I sadly missed when it played here) and An American Hippie in Israel, hoping they simultaneously come to BD and DVD. But it'll take those dudes like another five years for that...

Also, as an aside:

Any word on whether the H.G. Lewis Blood Trilogy BD set is total shitsauce, a/v-wise? I'm not too stoked about all three films being on one disc.

I've only had a chance to watch BLOOD FEAST so far. I'm sure I'll have a more meaningful review for these films once I've had the time to watch all three of them, but it's fair to say that the release is... frustrating.

The good news is the film transfers, broadly speaking, look pretty damn good. Detail is immaculate, and while grain is inconsistent (at best) I have a feeling the 17 Mb/s bitrate is at least in part to blame for this. The film source has some print damage and missing frames, but if someone expected an almost 50 year old gore film to be any different, I will personally kick them in the balls.

The three films are presented at 1.78:1, which is... odd, to say the least. I have no doubt that they were shown at 1.85:1 when they were released theatrically in the 60s, but the framing doesn't really do the films any favors, and all of the prior LD/DVD releases were in the negative's open-matte 4:3 ratio. I wouldn't say the framing is ruinous for BLOOD FEAST (and don't have the DVD to compare anywya), but it does seem like a step backwards. Both 2,000 MANIACS and COLOR ME BLOOD RED switch to 1.66:1 during the title sequences so as not to lose any of them! If you have to switch the aspect ratio during the credits, dude, you done fuk'd up somewhere.

The real bad news is that the shadow detail is completely screwed up. The film never drops off to IRE 0, and you can actually watch "shadows" drop off to milky gray. The problem is that some idiot in the chain mastered the "black" levels to be IRE 7.5,which was the analog standard black level for NTSC US. This is the sort of mistake I want to slap DVD authoring people for, but it's so outside the realm of acceptable on Blu-ray that all I can do is smash my head against a wall, repeatedly...

If the disease is not treated immediately, then everything will result in harm to the health of the body. Thank you for sharing the information