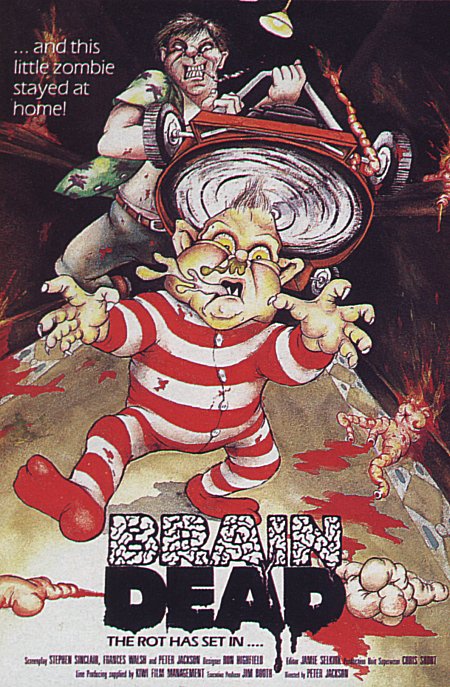 For better or worse, the High Definition Blu-ray debut Peter Jackson's final Kiwi splat-stick epic, DEAD ALIVE/BRAINDEAD is exactly what I expected from Lionsgate. The disc retails for twenty bucks, but can be had for about half that if you're not as stupid as the title's implications. The only extra to be found is an upscaled American trailer, which sadly is nowhere near as great as the original Braindead ad.

Perhaps most importantly, it's still the 97 minute "Unrated" US cut bearing the title Dead Alive, which is roughly 6 minutes shorter than the original cut that literally every other region in the world saw on both their theatrical and home video release - barring any local censor cuts, of course... Germany, I'm looking at you. Discussion over how Jackson personally trimmed the film for its US release has been brought up, but not having any firm source on this I'm inclined to shrug it off as urban legend until proven otherwise. Even if this was Jackson's Directors Cut, I think the original version was the better of the two... so it's really too bad the uncut version is still only available as barely watchable letterboxed PAL DVDs the world over.

If after knowing all of this you're still interested in watching the "slightly" abridged version of Jackson's best early film, this is probably all you really need to know:

It's a transfer struck from whatever film materials Wingnut Films gave to Trimark nearly 20 years ago (I'm guessing an Internegative?), and has clearly received little in the way of dirt cleanup and print stabilization. The print is also seems excessively grainy for a 35mm production from a man who clearly knows what he's doing behind the camera. It's cropped to 16:9/1.78:1, despite every non-US release having been framed at the negative's 1.66:1. For all intents and purposes it's a higher resolution presentation of the old VidMark R1 DVD, right down to the cover art now that I think of it! 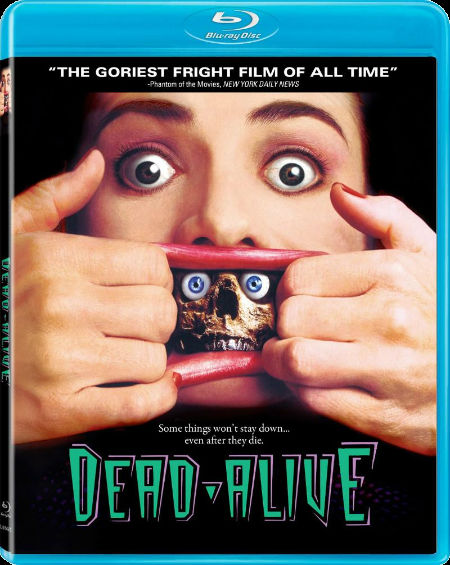 To be fair, it is a bitchin' cover...
If you've ever seen the HDTV broadcast from 2007, it's basically that except encoded progressive and without a faux-5.1 track. The transfer is middling, neither great nor terrible, though at least there's no severe issues with digital noise reduction, edge sharpening, emulsion scratches or anything else of that nature. It's a perfectly stable presentation of what can accurately be described as an archival 35mm source, is surely comparable to an actual release print and it's certainly never looked better... it just doesn't look especially good, either.

That said, the level of film quality seems to vary wildly, even from shot to shot. While broadly speaking the entire scene where Uncle Les fends off zombies in the garden and the toolshed looks as rough as most of the picture, the close-ups of him pulling Father McGruder's teeth out looks comparatively polished - crisp and almost completely free of harsh grain. The shots of the Vera puppet do much the same, looking considerably less noisy and blown out, as is the scene in which out hero tranquilizes his mother and the nurse in the basement. I'm not certain at a glance if this is the result of Jackson having used worse film stock for certain scenes than others, or if this is the result of these scenes in particular having some digital tweaking (perhaps it's a little bit of both?). For the time being anyway, I'm going to chalk this one up to the materials themselves with the warning that the film looks inconsistent, with considerably more of it looking somewhat worse than it does better.

With that in mind I have no doubt that the film could (and perhaps should) look better than it does here, but Jackson has threatened to go back and restore his original three films on more than one occasion and so far has yet to touch any of them. Until further notice, this is likely as good as it's going to get.

The film weighs in with an average bitrate of 20 Mb/s, which is a bit too low to accurately reproduce the coarse grain structure without temporal smoothing, but there's so goddamn much of it and the camera is so busy moving that it's difficult to actually pick out any errant compression artifacts in motion. As is so often the case anyway, heavy grain looks notably better in motion than it does in stills, so while you can get a good grasp of what to expect from the disc proper from them you'll probably do less wincing with the actual release playing at 24 frames a second. Audio is the film's original English stereo, presented as lossless DTS-HD MA 2.0 at 24-bit depth. I'd say the release sounds considerably better than it looks, and can't imagine anyone could find a valid complaint other than "it sounds like a 20 year old Kiwi splatter film". Apparently both English and Spanish subtitles are included, should you want them.

Having suffered through the uncut but almost unwatchably poor Laser Paradise 4:3 DVD from Germany for nearly a decade now, I know how all too well how bad the film can look, and this is certainly a several steps up from that vomit-inducing VCD quality release. The new Blu-ray is probably worth the $11-12 that Amazon seems to be hawking it for, but honestly not a penny more - it's every bit a catalog title kicked out the door, but at least the price is relatively fair for the level of work that clearly went into it. Were this transfer the uncut "Braindead" print - even in the less than optimal state this one was in - its ranking would likely skyrocket this up to being the pre-Halloween release to own this year, but alas, all we get is Dead Alive looking every bit its age. If you love the film as much as I do the HD presentation is enough of an upgrade to warrant a few bucks, but that's largely because the uncut DVDs are so piss-poor to begin with.
at 5:44 PM

It`s too it didn`t have the orginal cut, but i bought it anyway. I have only watched the original cut. I think it looks good. Improved from my lousy UK DVD.

I hope Bad Taste get`s released on Blu-ray soon. It should look even granier, beceause it was shot on 16mm,

The BD is certainly a massive improvement over any of the various European DVD releases I'm familiar with. It's a shame it's the cut version, but for whatever reason some people seem to like it better that way. (Honestly though, how can someone not love the scene where Void and his dumb greaser pals are arguing over how to pronounce "Necrophiliac"!?) And I'd love to see Bad Taste on Blu-ray - Meet the Feebles, too, please!

I just really hope they go from the negative next time. While I'm not totally positive how good Braindead could look, I'm certain going from a second generation print made almost 20 years ago is a pretty heavy factor against this being an ideal presentation...

A proper cleanup would be much appreciated, but this being one of my favorite films and it being so cheap, I'll pick it up at some point—probably the same time as the new Evil Dead II Blu-ray if that film is finally done justice in HD. *Crosses fingers*

Maybe it's just that I've seen it a bunch of times and the original cut maybe twice, but I prefer the US unrated cut. I suppose that could change with further viewings of the original. Although it's too bad my Italian DVD doesn't have the "God Save the Queen" intro (have yet to see it), nor does it have the cool "Braindead" animated splatter logo, just a lame, still "Splatters".

By the way, have ya got any opinions on Troma's Blu-rays? DeepDiscount's having a pretty good horror sale right now, and I'm contemplating whether to upgrade or just stick to my DVDs.

Man, that Italian DVD was a real mess! It's basically just an upscale of the same 4:3 analog PAL masters everybody's had access to since the mid 1990s.

Laser Paradise actually pulled the same shit with a (German only) DTS track, except it's even worse since they made the remastered version an "exclusive" to the Peter Jackson Trilogy box, forcing you to potentially re-buy the same shitty transfers for Bad Taste and Meet the Feebles! The video bitrate doubled though, which is nice... I have that first release, and I swear it's compressed so badly it might as well be a goddamn VCD.


As for Troma titles, I actually haven't taken the plunge on any of them just yet. I'd love to have THE CLASS OF NUKE 'EM HIGH and TROMEO & JULIET. Caps on the latter looked surprisingly good, but I was trying to hold off until someone trustworthy did a full fledged review... I'm afraid I may have to be the guineapig on these two titles eventually. (And seriously, Kaufmaan, where the hell is Toxie!?)

I've been too afraid to get any of the Troma flicks on Blu in case they're stinkers. The caps I've seen are difficult to go by because they're compressed to hell it seems and just aren't showing the detail that reliable sites' caps do. I'm just not sure if I wanna upgrade my DVDs for Tromeo & Juliet and Poultrygeist. Hopefully when the first and fourth Toxic Avengers hit the format, they'll be really good transfers: those have gotta be my favorite of Kaufman's films, alongside Terror Firmer.