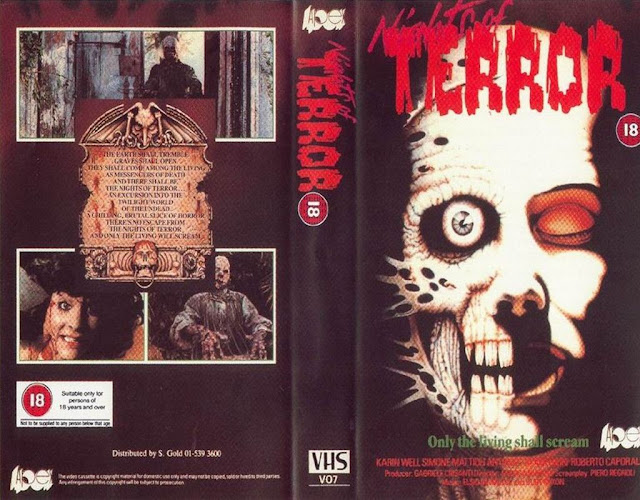 It's Not Who You Think It Is...
A correction/clarification worth noting: Blu-ray.com user "Telecine" has stated that s/he works for LVR Video & Post, the Italian film lab responsible for all of Blue Underground's HD masters of Italian genre films, which in turn are being used world-wide.

Anyway, while I'm still hoping for more info regarding the funky DVNR on Torso or the coarse 'grain' on literally all of their titles, s/he pointed out that LVR had absolutely nothing to do with either Arrow Video's THE BEYOND or Shriek Show's BURIAL GROUND. I had assumed they did the latter specifically because they had done Media Blasters' two prior Euro-Horror transfers, there were a number of basic similarities in the general appearance of the work, and not having a film lab listed I hazarded what I felt was an educated guess.

Turns out I guessed wrong, and I feel kind of bad about that. I wouldn't want anyone to be implicated for a garish High Definition turd like Burial Ground if they weren't responsible for it! Of course the implication we're left with is that there's yet another lab in Italy that produces even worse results than LVR, and that's an utterly horrifying thought.

We'll see if much else comes of it, but I don't think there's a lot they can say or do to change how I feel about their transfers: The root of the problem lies in their Cintel hardware, and there's nothing they can do to "fix" that short of buying a new Telecine. The DSX they have now probably cost them up to (and including) a cool million dollars US, and good CCD scanners are no cheaper, so asking them to swap it out for something a bit nicer is probably a pipe-dream.
at 7:05 PM

I thought Burial Ground was a particular low and hoping it wasn't the same people responsible. That's a relief. I'd rather have LVR over whoever the hell this other place is, ha!

Agreed. As many mistakes as LVR have made, I can now say for certain that they've never made any so bad as BURIAL GROUND. Updated my review a day or so ago when I caught wind of this - good to see you've done the same. Now I guess the question is who DID do this, and how can I avoid them in the future?