Invincible? I Think Not... 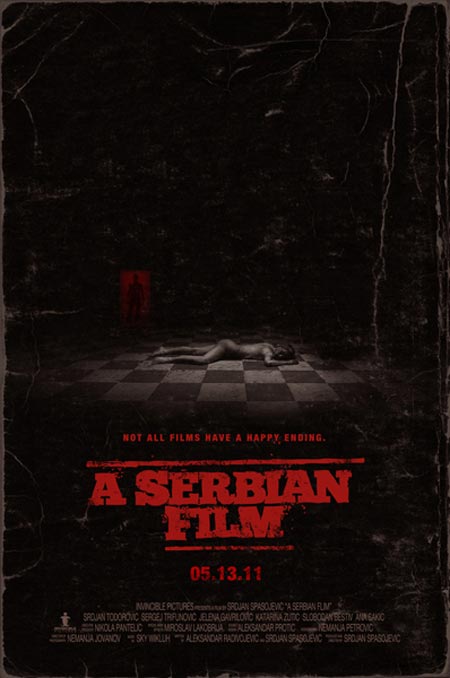 Blu-ray.com has POSTED their review of Invincible Pictures' "Unrated" North American release of Sdrjan Spasojevic's genre-destroying, critic-dividing and all around baby-f*cking epic A SERBIAN FILM/SRPSKI FILM. I won't fault Jeffery Kaufmaan for blasting the film a new asshole and calling it repellent, pretentious bullshit; he's neither the first nor the last to come to this conclusion, and while it may not be my own opinion I do fully understand that this is a film mathematically designed to create this violent reaction in a large number of people... in effect, the film is a trap and he walked right the fuck into it. Can't blame him for that any more than I can blame a komodo dragon for getting stuck between fence posts after eating a belly full of sweet, delicious goat.

In the end there are no bonus features - not even those brief director interviews the UK release got. The "Limited Packaging" is a slipcase over the keepcase, wow, yippie. 2.0 stereo audio, despite every other DVD release on the planet featuring the original 5.1 mix... but none of that really matters, does it? There's been talk of the film getting censored for its inevitable US release for some time now, and thanks to Jeffery being a clever enough reviewer to list the US cut's runtime, we've finally hit our moment of truth...

UNCUT NORDIC BLU-RAY:  01:43:46
Assuming the US release begins with the Contrafilm logo and ends with the original Croatian film credits, that's a grand total of 1 minute and 49 minutes worth of cuts... depressing, but not entirely shocking. I'll eagerly await the Schnittberichte.com censorship report, but already having an uncensored copy myself I don't really "need" Invincible Pictures' release anyway.

So, there we have it. I hate to have to say this, but don't fucking bother supporting this release - if you really want to own an original copy and give Spasojevic and his pals their due... well, good fucking luck. The German, Norwegian and upcoming Dutch releases are uncut, but almost impossible to find these days, and of course none of them have any English subtitles.
at 12:17 AM

It strikes me as inane bordering on stupidity for the Dutch version not to have English subtitles. If they're truly releasing an uncut version, wouldn't they want to augment their sales with people from across the world who want to import an uncut version?

They want to cash in on other regions - who wouldn't? The problem is that for every language you include on a DVD/Blu-ray, you essentially have to pay for the sales from that region too, wither you'll actually get them or not.

The license for, say, including only German or Dutch or Nordic subtitles costs a fraction of what English subtitles would cost due to the sheer size of the English speaking population. The Dutch rights to A Serbian Film would likely be dirt cheap because the market for the film that speaks Dutch is considered miniscule next to the market for the film that speaks English.

I have no doubt that they were offered, but odds are including English subtitles would have driven their costs up anywhere from five to ten fold. I'm sure an uncut, region free, English subtitled copy would sell more units than a Dutch-only Region B release, but would it actually sell ten times as many? Even if it did, how long would it take to recoup those costs versus a low-investment, low-payoff Dutch subtitled release?

Now I know, most American and UK consumers don't import anyway (Aussies and Kiwis? Them I'm not so sure about...), but they figure that an uncut release with English subtitles will still inevitably take enough of the sales from a cut release from a region they're interested in selling to - it's flawed film licensor logic, I know, but that's the reality of the business.

I have to admit that this one never clicked with me, and that I just don't understand the appeal of it. But having seen the uncut version, and speaking from a strictly American viewpoint, what exactly is there to cut? I know the ideas behind the violence are sick and twisted (often to the point of silliness in my opinion), but every last frame of the stuff is simulated. I mean, were the cuts required by some governing body I'm unaware of, or is this just a case of distributor tampering?

Distributor tampering, I'm afraid. The short version is the scenes involving children - simulated or not - gave Invincible Pictures cold feet over the potential of "Distribution of Obscene Material" charges. Unfortunately, all it takes is one bored District Attourney or Sheriff with nothing better to do and you can do time for material that really isn't illegal, but can be deemed so by a jury anyway.

One such example happened just last year when Phillip Greaves self-published "The Pedophile's Guide to Love and Pleasure: a Child-Lover's Code of Conduct". The material isn't directly pornographic (to the best of my knowledge at least), but it still ran afoul over charges of being obscene.

Another example was Christopher Handley, who did 6 months in the joint, 3 years of supervision and 5 years probation for a stack of fucking comic books depicting 2D drawings of fictional minors in varying levels of sexual activity (from "none at all" to "fucking pigs").

Simply put, obscenity is in the eye of the beholder. It was created for honorable reasons - essentially as a stop gap to let pornographers go about their business so long as nobody in the community actually gave a fuck - but it's become a sticking issue for distributors of "extreme" entertainment, including pornography and sexualized horror films. Do you release the title uncut and hope nobody makes a stink about it? Or do you cut the most offensive material and hope you won't lose your shirt on the title?

More importantly, most people refuse to fight it because the laws are so ridiculously stacked against the "culprit" to start with (fair or not). For example, every single individual panel depicting "obscene" material in those comics Handley plea-bargained against were considered an individual charge, so a single 64 page magazine could lead to hundreds of them.

Would the uncut version A SERBIAN FILM be considered "art" and thus a free speech issue by a jury? Honestly, I kinda doubt it. I think they'd get to the scene with the newborn and it'd be over pretty fucking quickly. But would Invincible Pictures have been brought up on charges AT ALL? That's the bigger question, and it's one that, sadly, nobody can answer with any real authority.

FUCK I am so bummed! If it was just a few quick shots I wouldn't worry about it, but a whole minute can account for many of the film's most striking moments. All I have now is an uncut bootleg torrent with a hideous watermark over the entire run time. Do I have any better options (my bd player is region locked)?

'Fraid you're currently SOL on this one, Tommy. There are a few Region "B" locked uncut releases sprinkled through Europe and costing more than they ought to, but none of them feature English subtitles.

I'm losing no sleep over it.

The actual "cut" status doesn't matter, to be honest. You can take out half the movie, and it is like taking a beating to watch; you still come away knowing how abused the Serbian nation is.

The director in every interview makes it very clear that making this film was, if not cathartic, at least marginally therapeutic in that he told his horribly true story. So who cares if I see it at all? I'll take 'Cannibal Holocaust' over 'Serbian Film' any day. I just don't like to see children being abused, even if it is just acted.

I live in Sweden so i have the Scandinavian/Nordic release, its a perfect and uncut release indeed. It has Swedish, Norwegian, Danish and Finnish subtitles. Its banned in Norway though, but allowed and very easy to find in Sweden, Denmark and Finland. The back coverart is written in Swedish, Danish, Norwegian and Finnish

I have to say, I feel ripped off. I bought the "unrated" North American version as soon as I found out that it was in stores. While I watched it, I was pissed off to see how much was cut from the version I watched online.