The Kiss of the Queen's Blade 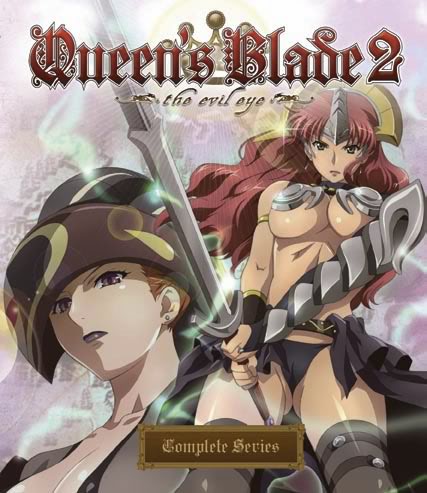 I guess I spend more than my fair share of time talking about Media Blasters in a negative light. It's not out of some vindictive, sadistic pleasure I get out of stomping on John Sirabella and company's hopes and dreams... they honestly just release a large number of products that kinda suck, and it so happens that a large number of those sucky titles are movies I want. So it comes as a pleasant change of pace when I can say that QUEEN'S BLADE 2: THE EVIL EYE/クイーンズブレイド 玉座を継ぐ者 is about as perfect a release of the 12 episode jigglefest as we could ask for. Not to say this is entirely a shock, as their presentation for the first season - Queen's Blade: The Exiled Virgin - was similarly top notch.

Wither or not Queen's Blade is "good" is almost a moot point. The show was based on a series of Tee 'n' Ay filled RPG sourcebooks - picture it like a game of Dungeons and Dragons, except when you roll your twelve sided die, you're treated to pictures of hot psuedo-anime girls getting stripped down to their skivvies instead of a boring chart listing how much damage a goblin scout does with his +1 poison dagger. This absurd concept became an ongoing actual anime series in 2009, and used a staff of highly trained pornographers - including La Blue Girl and Twin Angels character designer Rin-Sin, and Front Innocent and Yakin Byoutou San director Kinji YOSHIMOTO - to craft a show that's so goddamn close to porn it's almost as if he inevitable steamy lesbian couplings were cut at the last minute. (And I swear, some of the left-over setup remains.)

I'm sure most people who are still waiting for the next Cowboy Bebop or Trigun to blow their minds will write it off as unwatchable pandering garbage... and that's true, in some ways. It's a totally goofy, self aware kind of fun that prioritizes nosebleed inducing fanservice over common sense, and gives absolutely zero fucks of how over the top it gets in the process. It isn't really a satire of Japan's culture of over the top objectification and sexualization - or if it is, it's damned subtle - but it does it so shamelessly that it's going to leave you either utterly repulsed or giggling like a three year old who just saw dog poo on the side of the road. With fetish minded gags like Merona being made of living transparent slime, Echidna literally wearing a live snake as a thong, and Cattleya using her ridonculous bewbs as a travel-friendly pillow, it's whole heartedly embracing these bone-headed fantasies rather than poking holes in them... and come to think of it, what's so wrong with that? Can't we just enjoy the retarded tropes of post-Frazetta/Vallejo/Rojo "Fantasy" being about buxom half-naked women fighting giant monsters - or each other - for little sensible reason cranked up to 11 and change? I'll be damned if I won't enjoy an attractive, charming, and often legitimately funny show just because it's catering to my boner instead of my brainstem.

Media Blasters' Anime Works imprint, technically speaking, released this SKU back in July. Unfortunately they only sent a limited number of copies to specialty anime retailers like RightStuf and Robert's Anime Corner Store, and only started farming copies out to Amazon in the last week or two. I know because I've had the fucking thing on "pre-order" since August. Mind you, this isn't the first time we've seen Media Blasters "leak" a title to a few retailers and then do a full release a couple months later, having - ironically enough - given Amazon the first season of Queen's Blade before they shipped copies to RightStuf. Why is this happening? Is Media Blasters only printing 500 copies at a time and then ordering more with the returns they get from the initial pre-orders? I honestly don't have any better guess, but in any case, it's out now:

Completely Random shots from Episode 8.
All 12 episodes are presented in 1080p at an average bitrate of a whopping 35 Mb/s (AVC), with lossless DTS-HD MA (16-bit) stereo in Japanese with English subtitles, as well as an English dub with accompanying slates.  The mini-OVAs are subtitled only (which is fine by me!), and for one reason or another the original TV spot is a 1080i upscale, likely because it was created at 480i anyway. Honestly, if the video files were copied from the Japanese encodes, I wouldn't be shocked - but that's far from a complaint. Anime consumers back in Japan who regularly pay fifty bucks an episode get pretty OCD about the presentation of their insanely expensive habit, and if that means the US release costing about fifty bucks at Best Buy and RightStuf for the entire series looks just as good, I consider that a win/win.

The show is packaged in a pretty standard 2-disc Blu-ray case, though the "B" logo at the top is sculpted but not painted. Strange... can't think of any other discs I own with a non-painted format logo. I also hope you really dig that cover, because both discs are silk-screened with the same art. This is a show that easily has DOZENS of cheesecake pin-up shots to pick from, and we get the exact same mash-up three times in a row? Weak, but oh well. If that's the biggest complaint I can dig up, this release is worth every penny MB's asking.

Will you like Queen's Blade, friends? I dunno... but it's pretty easy to figure it out. Just ask yourself how you feel about the accompanying line of stripable, anatomically correct 6" action figures - which, honestly, I've bought far too many of as it is. Are you cringing, or laughing at the angel girl with an alternate face covered in 'spilled milk'? Decide wither the show itself is worth fourty bucks shipped based on that gut feeling alone, and odds are you'll not be too disappointed one way or the other.

For what it's worth, the show has just been renewed for a third season after the OVA's clearly successful 6 episode run. No word on wither or not Media Blasters will be pursuing either of these, but I can't imagine the magical combination of fantasy duels and half-naked ladies has been a slouch in the sales department.
at 2:54 AM

I've gone back and forth on whether (that's how ya spell the word, by the way. ;) "Wither" means something else entirely) or not to buy the Blu-rays. On the one hand, I loved the first episode and quite enjoyed the bountiful bosom bounceage throughout the first season, but I was also left feeling pretty empty and unentertained. I don't know whether to chalk that up to it just being a soulless show that offers nothing besides 'bate material, or if it's mostly because I saw it dubbed on Netflix and I fucking hate English dubs more than anything in the whole world. More than even AIDS. (OK, so that's hyperbole, so what?)

I'd probably best use my money on something more satisfactory, but these BD presentations look really appealing, the show does make me smirk for its pervaciousness, and it did give me a boner, and...

Wither, Whether, and Weather, the very bane of my existence... but hey, I do know the difference between "Your" and "You're". That puts me so damn far ahead of the curve in 2011 I don't feel so bad about having the above grammatical hang-up. :)

If you don't like the show I certainly wouldn't fault you for not picking it up - heck, the best release on the planet means nothing if you simply don't like it. But I've never watched it dubbed, and can't even imagine how horrifying that would be, though I have the proof sitting on my shelf, just waiting for me to feel especially masochistic...

Hell, even the original English language anime, like ARMITAGE III: POLYMATRIX tends to be borderline unwatchable. You really haven't lived until you've heard Kiefer Sutherland half-ass his way through the whole thing so hard that it makes all of his late 90s contemporaries sound like gods.

It's not like we don't have some talented voice actors in this country, we just don't tend to pay them to work on imported product. The dub production budgets these days are so miniscule that even talented performers are given about ten seconds to come up with a final take on the fly, so I can't blame the actors or the language entirely. It's mostly just an outdated system that I'm amazed has lasted this long.

Articles that are very interesting to read, hopefully provide benefits for many people