Night of the Intruder

So, just a heads-up for the people who care about this sort of thing (and a big thanks to Christopher for alerting me to one of them): 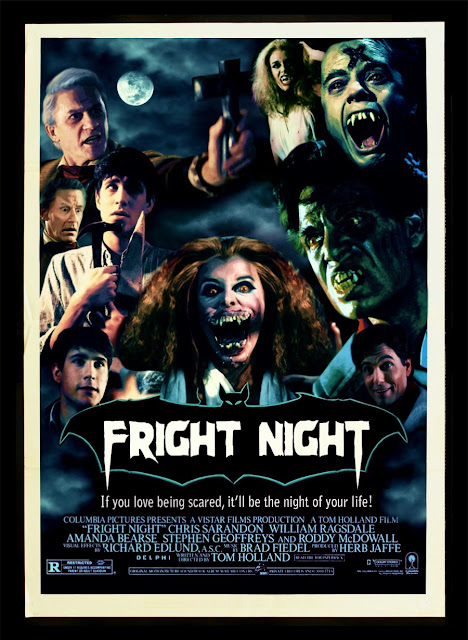 This is way cooler than it really ought to be.

FRIGHT NIGHT is going to be available exclusively through Screen Archives Entertainment, with pre-orders starting on November 13th and shipping December 13th as something of a timely X-Mas present to all fans of quality, modern horror. The release will be strictly limited to 3,000 units and sell for $29.95, plus shipping.

I'm strangely satisfied to see that one of the men behind the Twilight Time company has issued the following statement on their Facebook:

Folks, for those of you waiting for the Sony Blu Ray let me just re-affirm something to you folks - Sony had ZERO interest in releasing this film on any other format, including Blu Ray.

They specifically said there was no market for this film, or not one that was big enough for them to warrant a Blu Ray release, and now with the recent remake flopping I wouldn't be expecting them to re-release their own Blu Ray down the road packed with special features to coincide with the box office bomb remake.

So, there you have it.  Sony simply isn't interested in the scraps that a successful 25 year old cult film will bring them on Blu-ray, and licensing "niche" titles out to smaller labels is, indeed, the future. I'll pre-order the damned thing as soon as it's available, and while I have no doubt that we'll see the same transfer in Germany or the United Kingdom or wherever through a third party in slightly higher quantities, it's good to see that someone cares enough about this film to pry it from Sony's cold, unfeeling claws. 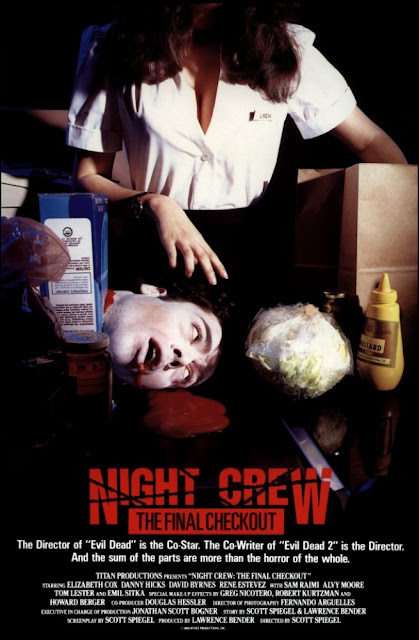 By far the best promotional art the film's ever had.
Well, except for maybe the Another World Entertainment cover...
On a slightly different (but all too related) note, Synapse Films will be selling an "exclusive" version of Scott Spiegel's gruesome slasher movie INTRUDER direct through the Synapse Films website. The short of it is that you get a bonus DVD-R including the rarely seen feature length workprint, burned and individually numbered by hand. It's also selling for $29.95, but to their credit Synapse will ship it for free by December 13th, the official release date.

Keep in mind that the Blu-ray/DVD combo set itself isn't limited and all of the extended KNB gore scenes are included as "deleted scenes", so even if you decide to roll the dice and save fifteen bucks through Amazon or Deep Discount you'll have the most notorious footage to drool over. The only "exclusive" part is having the entire film as a work in progress on a third disc... but damnit, that's so ridiculous that I've already put in my pre-order with Don and pals.

I wouldn't blame anyone who just wants to get the title for less than MSRP, but offering an exclusive, limited edition goodie - much less one that neat - was about all I needed to hear. My pre-order's in, and I'm sure a review of the Blu-ray will follow.
at 11:15 PM

Well, damn. I've already got my Intruder pre-order in at Horror Movie Empire, but with a $5 discount I'm only paying $12. Considering I got my Frankenhooker BD from them a month before release, I'm hoping this likewise will arrive a month early.

Tempting to have a limited edition goody, but if it's just a DVD-R and all the deleted scenes are extras on the BD/DVD anyway, I think I'll pass. And plus...twelve dollars! That sure beats the hell out of $30 plus shipping (HME ships free).

Fright Night, I'm all over that bad boy. I recently saw the movie for the first time having just picked up a $5 DVD of it on a whim. Fantastic flick; can't wait for the HD presentation. Gotta nab some of the other Twilight Time BDs also, plus the Fright Night score CD. And, whoa, Screen Archives has Carpenter and Morricone's The Thing score on CD! All over that, too. Gonna be so broke soon...

I'm torn as well. I mean it's not like it's some uncovered "Director's Cut." One can assume that the Final Cut included on the BD is, in fact, the director's cut. So I don't desperately need to see the extra footage edited into the film when it's already added as bonus material anyway.

I need to save my money for the Twilight Time BDs after all! Fright Night is a definite purchase for me. I also have The Egyptian and Mysterious Island on the way from SAE.

And, Christopher... I've somehow been completely unaware of Horror Movie Empire until reading your comment! Gonna check them out hardcore.

Absolutely, the 88 minute version of INTRUDER is Scott Spiegel's preferred cut of the film. The additional footage was cut specifically because it was so over the top that it made the film goofy and ridiculous - and all of the "important" bits (the gore footage) will be included as deleted scenes, anyway.

The complete workprint is mostly included as a sort of clever nostalgia piece for people who used to buy bootleg tapes of "extended" films in unwatchable quality just to see all the cool stuff they had missed prior. I'm sure it'll be readily available for download (if it isn't already), and it's not going to magically change anyone's perception of the film... it's just a cool little bonus that, had I already pre-ordered the film, I'd probably sigh and shrug that I was going to miss out on.

Similar to that Albert Pyun CAPTAIN AMERICA DC Blu-ray, it's a curiosity piece you buy for nonsensical bragging rights, not an integral part of your collection. I was going to buy Intruder eventually, so seeing this convinced me to give Don and Jerry all of my money. Otherwise I'd have bought it the day after it came out on Amazon for half the cost and not felt the least bit guilty.

It is good we use in herbal medicine, as they may awake to the authenticity of the drug product :)