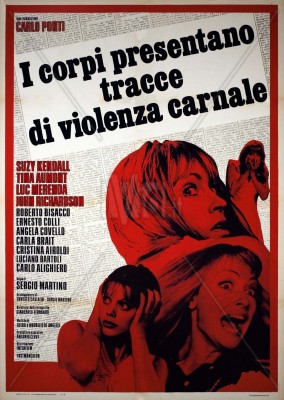 So my buddy Michael over at Land of Whimsy has threatened to tackle the question of image quality over the new Blue Underground Blu-ray release of Sergio Martino's 1973 "missing link" between giallo and slasher thrillers, TORSO/I Corpi Presentano Tracce di Violenza Carnale. I think the flick is pretty cool, an uncharacteristically sadistic thriller that basically sets the stage for films like The Toolbox Murders, Halloween, and Friday the 13th to take the notion of "the mind of a psycho-sexual killer" in their own direction, and with only an ancient X-Rated Kult copy on my shelf I was pretty eager to replace it with a new HD transfer... so, here we are.

I won't talk about the image quality - Michael will do a fine job of it, rest assured - but there is something that I need to clear the air over, and the fact that nobody else reviewing the title seems to have even noticed it is... troubling, to say the least. The Blu-ray includes both the 93 minute uncut Italian version, and the 90 minute "Export" version the alternate dubbed versions were based on. The Export title for the film was 'Carnal Violence', a shortening of the original Italian title which, when translated, is something close to "Their Bodies Showed Signs of Carnal Violence". While I have no complaints in regards to the presentation of the Italian version, the title card for the Export version starts like this... 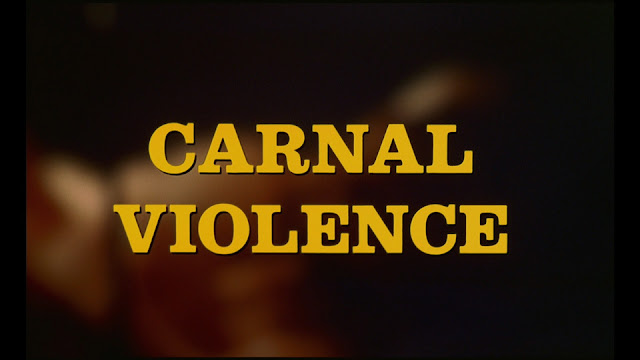 And then changes into... this!? 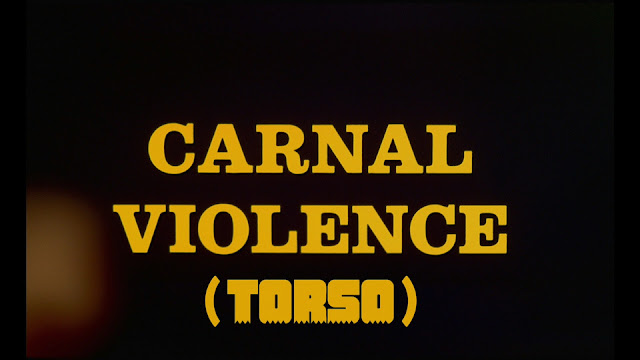 What's especially fascinating is that whatever clever fucker created this title card went out of his way to match the gate weave already present on the titles, but also makes the title "fade in" after the Carnal Violence title appears. None of the other titles in the film fade, so it looks only partially organic. It's also weird to see a title bracketed, isn't it? Seriously, do movies do that? What you need to understand that no vintage 35mm print ever looked like the above. Either it simply said "Carnal Violence", or the title card was removed entirely and replaced with the prologue sequence in which the animated "TORSO" logo appears. This American prologue is actually included on the Blu-ray as an extra, in a rather extreme Grindhouse fashion I admit (sourced from Quentin Tarantino's personal 35mm copy, no doubt), but at least it proves that the US release prints didn't look anything like the above title.

Bill Lustig, I'm a little confused... Why are you including the shorter Export version at all, if not to have an archival record of what the shorter cut looked like nearly fourty years ago? By replacing the title card you've actually damaged the value of the one thing of note the Italian version didn't have (the vintage credits). No, I get it - you're including both so you have an excuse to release only the shorter export cut on DVD, thus "forcing" fans who give the slightest shit to buy the Blu-ray over the slightly cheaper DVD, but if this is how you're going to treat the Export version, why even bother including it on the Blu-ray to begin with? Just include the Italian version as you did on the Anchor Bay DVDs of yore and be done with it already!

You want to get me really excited about an "alternate" cut of Torso, Bill? You should have only included the Italian version and the full Grindhouse print on the same disc. The chance to marvel at the original version from the negative versus a print that looks like Eli Roth jizzed all over it is the way to get my blood boiling. No, seriously, just look at this thing in 1080p!

And for the record, Internet, leave Roth alone already. I know he tends to talk about movies more than make them (and it's not like anyone bitching about Eli Roth has ever done that before...), but Hostel Part 2 kicks twice as much ass as plenty "real" giallo features out there, and remains the first time we've had a big budget Hollywood castration on the big screen since fucking Caligula! If that doesn't make a guy all right, I don't know what even could.
at 2:41 PM

haha way to back up Roth. I can't recall ever having more fun at the theatre over the past 10 years than with Cabin Fever. As for Torso, I'm ashamed to admit not seeing it as of yet. I am a huge giallo fan so I'll have to check it out soon.