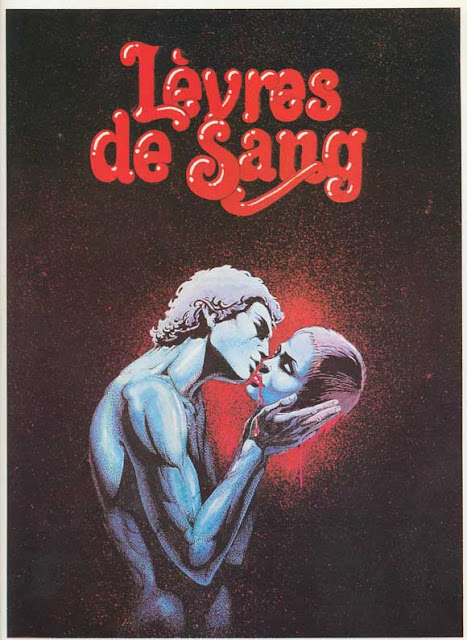 Awesome! Kino Video have officially announced the acquisitions of the Redemption catalog of Jean Rollin films, which include plans to release titles on remastered DVD and Blu-ray in 2012. The first run of titles include The Nude Vampire, The Shiver of the Vampires, The Iron Rose, Lips of Blood, and my personal favorite, Fascination. Tim Lucas will be providing brand new bonus material, and that charmingly sadistic bastard's been teasing us with some relatively encouraging looking HD screenshots for weeks now.

There's some obvious Rollin titles missing from this announcement, but I have little doubt that Kino is getting these in a package deal, and will do more should the market bear what they've already got on their plate. To be honest, I thought Rollin's first film, Rape of the Vampire, was goddamn awful and could live if we don't see that on Blu-ray for a while yet. But I'm surprisingly saddened to not see The Living Dead Girl among them. The film has many flaws, but it's final reel is such a tour-de-force of visceral bloodshed and melancholy loneliness that it was Rollin breaking down that poetry so near and dear to him into its most basic components, bludgeoning the viewer with the themes of solidarity and of needing to destroy to truly live that it comes full circle with his, at times, almost infuriatingly symbolic earliest films.

Jean Rollin is a difficult figure to discuss because his works are so inertly polarizing: Either you'll love them or you'll hate them, and there's absolutely nothing anyone else can say to convince you one way or the other. They aren't really pointless nudie pictures and they aren't really unsettling horror movies, but more a measured and totally whimsical reflection of both. Poetry as narrative, if that makes any sense. Rollin clearly believed in his work, no matter how absurd it all tended to be, and while he was far less relevant today than he was in the 1970s the world is still a slightly less interesting place without him.

I wouldn't ever fault someone for walking away from The Iron Rose and calling it a pointless, pretentious pile of nothing, but at the very least I'll give Rollin credit for crafting a gorgeous, fantastic looking dreamscape out of little more than an actual cemetery and an old train. Rollin was, if nothing else, an impressive artist and I'm thrilled at the chance to admire his art in 1080p from a label who will likely give these features the respect and care they rightfully deserve.

Let's just hope that sales are a bit better for Kino than they were for Encore Entertainment, who released a slew of impressive - if, at times, artificially padded - 3 disc special edition DVDs, then trimmed them down to 2 disc editions in simpler packaging for a few dollars less, only to can the Redemption line altogether after the 8th feature.
at 5:16 PM