Cut A Centipede In Half 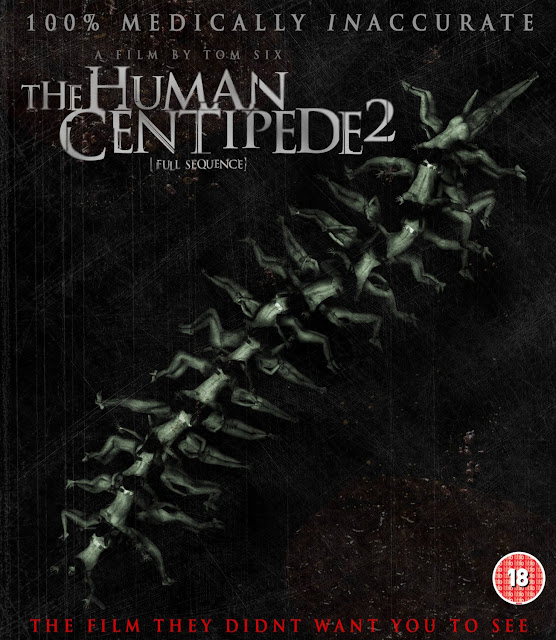 Having had a brief look at the UK home video edit of HUMAN CENTIPEDE 2 [FULL SEQUENCE], I can confirm that - though still heavily cut by the BBFC for its "18" Certificate - there's at least two sequences present on the British version not available on the North American "On Demand" cut. Don't go reaching for your Mastercards so fast, boys - while it includes some footgae not available locally, that comes at the cost of over 30 cuts when compared to the US version, and there are actually jump cuts in BOTH of the "extended" UK scenes, so it's not as if cobbling the two versions together would recreate the uncut version anyway.

Without anything more solid at hand, here's the runtimes of the two versions floating around, minus warnings and dead space at the end of the credits of the former:


ON-DEMAND VERSION: 1:27:33
UK BLU-RAY VERSION: 1:27:51
The BBFC website says that the original, rejected version ran 1:26:50 - but that was on video, which in the UK implies a PAL runtime that's about 4% shorter than its theatrical incarnation would be. All we know for sure anymore is that the UK DVD is two and a half minutes shorter than its submitted length - roughly 2:37 shorter on Blu-ray. With that in mind we can assume that the complete, uncensored, 24fps runtime for the film is between 90 and 91 minutes - don't forget that runtimes are fickle bastards if studio logos or dead space at the end of the credits are included, so it's difficult to say anything conclusively without having an uncut version on hand to compare everything with... all I know for sure at this point is that the UK version restores two sequences not present on the On-Demand version, while the On-Demand version has numerous sequences cut from the UK version.

To make matters even more frustrating, there appears to be an alternate take to smooth over the big scene missing from the On-Demand cut! Without too many blatant spoilers (for now), I'll say that this shot is exclusive to the US release, and that the version submitted to the BBFC plays out VERY differently: 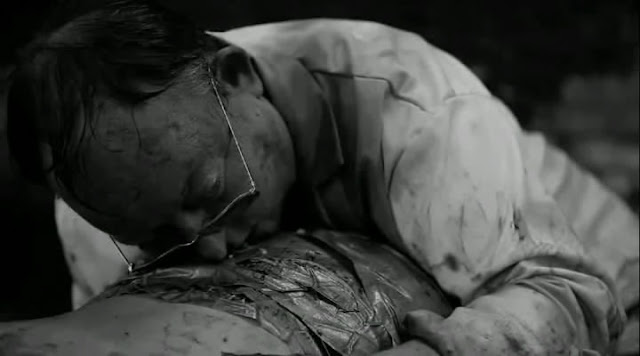 This shot is less than 3 seconds long, but it does leave me curious if the On-Demand version has any other footage not included in the UK Blu-ray that aren't directly related to all of those BBFC jump-cuts? Maybe if the Australian Classification Board bows to pressure and bans this after having cleared it once before (just like they did for A SERBIAN FILM), I'll be stuck being the asshole to provide a side-by-side edit report.

Frustratingly, there seems to be no US video release date in sight. With a due-date on Valentine's Day and a listed runtime of 88 minutes, we'll just have to wait and see what happens. Not that I expect IFC to grow a big enough pair to release the complete, original version of the film, barbed wire included, but it'll be nice to know for sure...
at 5:23 PM

According to blu-ray.com, HUMAN CENTIPEDE 2 blu ray will be released on February 14, 2012 by IFC Films with a running time of 88 minutes.

MPI / IFC have it announced for February 14th:

A nice way to say, "Happy Valentine's Day!" to your loved ones...

I also wanted to add that regardless of what one thinks of the HUMAN CENTIPEDE films, Tom Six, IMHO, has a really striking visual style and does have talent as a director.

D'oh! Guess my Search Fu is super weak if I didn't take the 3 seconds to look up from that goddamn Blu-ray.com forum and do a search first. :)

On Valentines Day, no less? Haha! Oh wow. Love it. If Tom Six didn't pick the date himself I'll be amazed. Too bad the runtime suggests it'll be that same watered down rape-free version they're pimping via On-Demand... guess all eyes are back to Australia.

I will be gifting this to my man on Valentine's Day... IF it is uncut.

Greg: You're either the best, or worst, boyfriend ever. I don't know your beau enough to know which. :D

Anon: Agreed, 100%. The fervor surrounding [First Sequence] left me mildly disappointed in terms of raw, visceral ickyness, but I can only praise how he handled creating it. The first film's methodical pacing and intimaely sympathetic camerawork forced the viewer to empathize with the Centipede, even if they couldn't fully understand what it has to say, or felt. We as an audience are forced to become the fourth segment, silently suffering along with it and hoping for sweet release.

Plus the first film's brilliant and even charming mad professor was a legitimately interesting character, which is more than I can say for... "Martin". Shifting the viewer's analog from The Centipede to Martin is a ballsy move, but [Full Sequence] is a prime example of why it rarely works. SALO was a rich and smart enough narrative to shift the viewer to be one with the Libertines where the effect is humbling, making the audience feel like an asshole for even wanting to see the film. Sorry, Mr. Six, but you are not the new Pasolini... at least not yet.

Tom Six is a talented man, which is exactly why [Full Sequence] is so frustrating! It had every chance to be something beautiful and disgusting, giving me something else to put on a pedestal next to harrowing material like ANTICHRIST, VIDEODROME, CANNIBAL HOLOCAUST and SUBCONSCIOUS CRUELTY. Instead he uses the film to metaphorically teabag his detractors for 90 minutes. Sigh.

I dragged him, his sister and a friend to see First Sequence at the IFC theater, when even I didn't know much about it, two years ago. He ended up loving it (no comment on the reaction of the other two) and then wanted to go see Full Sequence when it was at IFC not long ago. I had to put my foot down and tell him no though... We don't support censorship with our wallets in this household. Or at least I don't and try to instill my beliefs in him. Call it tough love ;)

And you make a hilarious point with... "Now I wonder: If hating Schindler's List means you're antisemitic, does hating [Full Sequence] mean you hate torture victims? ;)"

This article is very meaningful .. thanks