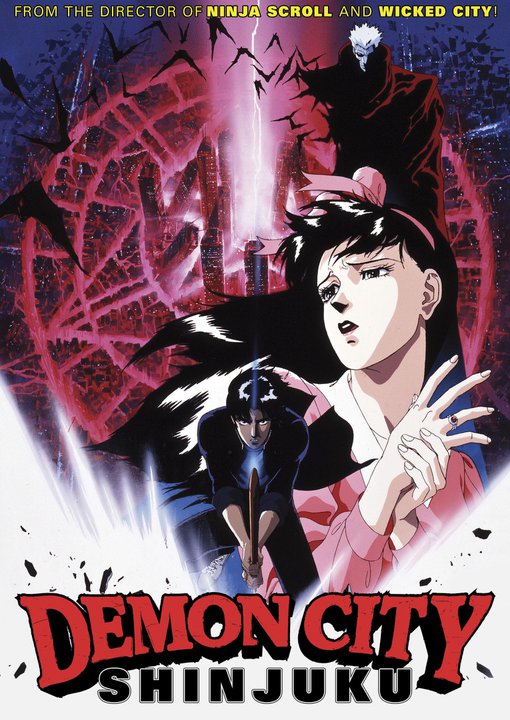 Yeah I know, I never talk about DVDs anymore. Blu-ray is finally starting to out-sell the SD competition, and the more DVDs I can sell for a dollar to FYE to replace with a High Definition version, the happier I am. Even so, several niche distributors focusing on cult titles like 1980s Japanese animation simply aren't at that level where releasing every title on Blu-ray is feasible, financially speaking, and so every now and then we'll have to make an exception and add yet another DVD to the shelf. Discotek Media/Eastern Star's recent R1 DVD release of KAWAJIRI Yoshiaki's supernatural action fantasy, DEMON CITY SHINJUKU/魔界都市＜新宿＞, based on the recently translated KIKUCHI Hideyuki novel of the same name happens to be one of those exceptions.

Since a few friends have asked if the new Discotek DVD is up to snuff, I decided to make a quick bitrate comparison between the new R1 and the 2007 Japanese Special Edition. The top graph is the Geneon DVD, the bottom is for Discotek DVD... 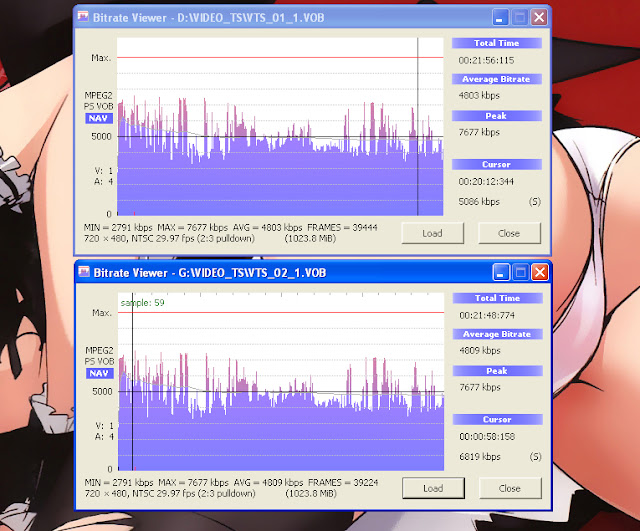 ...or, maybe it's the other way around? I honestly don't remember, but it doesn't really matter because they're literally the exact same transfer. Same audio files, same video files. The menus, chapter stops and subtitles are ever so slightly different, which is why the VOB cutoff point differ, but the bitrate, source and encoding is exactly the same - an interesting oddity I noticed on Nozomi Entertainment's Revolutionary Girl Utena box sets, as well. The R2 DVD is an absolutely gorgeous affair restored in High Definition with a DTS Japanese remix, and the R1 release from Discotek mirrors it to perfection.

The transfer is absolutely stunning for a DVD, and if you still have the old CPM DVD, do yourself a favor: immediately set fire to it, and then throw it out of the window of a moving car. Yes, the remastered Discotek DVD is just that much of an improvement.

Subtitles appear to essentially be the same as the old CPM DVD, except all of CPM's hardsubs have been replaced with player generated subtitles. The CPM translation was by Neil Nadelman, so there was little to complain about. The villain's name in the original texts was "レヴィ・ラー ", or 'Levi Ra', as in the biblical name with the Egyptian sun-god suffix attached to it. The Discotek DVD subtitles use the spelling "Rebi Ra", which doesn't make a lot of sense... you see, the katakana [ヴィ] is used only to express a 'Vi' sound, so while "Revi" could theoretically be a proper romanization, "Rebi" is right out. But I doubt Discotek is to blame for this oddity, since the Kikuchi approved translation in the novel original novel also uses "Rebi Ra" - this looks like it could be one of those oddities where the Japanese creators aesthetically prefer a certain romanization, whether it's accurate or not, in which case the hands of the international licensor are sometimes completely tied. 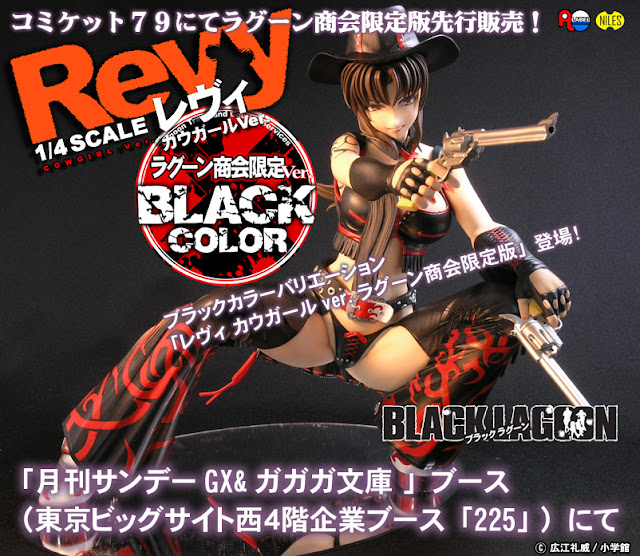 Pictured: Another anime character with the same exact name in katakana.
The only other letdown in regards to the R1 DVD are the special features. The R2 has a total of six animatics showing Kawajiri's impressive pre-production storyboards set to finished music and dialog, while the R1 DVD has only the first scene of Levi Ra and Genichirou duking it out over Shinjuku. The R2 also had 100 character design sketches and a Kawajiri trailer show, though the latter isn't that big of a loss. The R1 DVD adds what appear to be the English credits from the old CPM version - nice to have, but not quite on par with the rest of the R2 features that went MIA.

Considering you can get the DVD from Discotek's own website for less than twenty bucks, it's absolutely worth getting. The R2 DVD will set you back nearly four times that before shipping fees, and you'd still be up a creek if you wanted to watch the feature subtitled. The pruned bonus features are unfortunate, but not by enough to keep me from recommending that any and all English speaking Kawajiri fans add this to their collection.
at 7:50 PM

Hadn't realized Discotek released this. I've been meaning to see the film forever.

Now I just need to wait for the leaves on the money tree to regrow so I can actually buy this and other DVDs... Can't even buy as many Criterion BDs as I'd hoped 'cos of various sales and buying all the Twilight Time BDs (plus The First Nudie Musical and some soundtracks) at once.

Discotek has had some pretty nice releases in the last few years - it's a shame they haven't found the right title to jump into Blu-ray yet. Most of their new anime releases basically mirror the R2 DVDs with subtitles, and that's all I could ever ask for.

They're taking their sweet time with GOLGO 13: THE PROFESSIONAL to gather up some bonus features. I absolutely love that flick and there's some cool stuff that's been produced over the years, so I'm sure it'll be worth the wait.