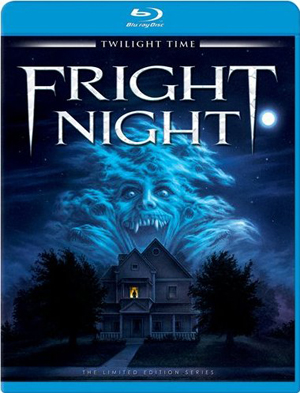 Screen Archives Entertainment will officially be taking pre-orders for Fright Night starting at 12 Noon Pacific Time (that's, let me check... 3 pm for me?) tomorrow - that's Monday the 14th - with a release date of December 13th. Limited to a mere 3,000 copies this release is a first come first served affair, so don't wait if you have any interest in quality 80s horror releases. The HD transfer work was handled by Sony Pictures, and word is the 1080i MPEG-2 broadcast version was no slouch in the audio and video department, so there's every reason to expect that this high bitrate 1080p release should only improve upon what we've already seen.

Orders can be placed exclusively at the Screen Archives website, and the list of current TWILIGHT TIME DVD/BLU-RAY titles can be found here. $29.95 plus shipping gets you the film, the trailer, and an isolated score, if I'm not mistaken. It's not a wild special edition, I admit, but Sony has shown to give absolutely zero fucks about this title, so I'd argue to everyone bitching that it's not available at Target for half the price that a quality, limited release made for the people who actually care is better than no release at all.

The company's main stock and trade is actually in niche dramatic titles from the 50s 60s, so this is the closest thing you'll find to contemporary genre cinema. Still, their release of The Mysterious Island on Blu-ray is shipping now and not yet sold out, so at least fans of awesome vintage stop-motion effects can get their groove on until this gem is available.

I went to the site maybe three minutes before 3:00, and I guess that made all the difference. Best of luck to the both of you, and anyone else who just wants a piece of 80s horror-comedy on Blu-ray.

Apparently Twilight Time themselves insist that "there's plenty of copies for everyone" and to keep trying periodically through the day.

Finally got my order in. Jeez. :p Only took one and a half hours till the site loaded.

Yup, looks like the site is back up now. I pre-ordered a copy, but I'm hoping for some reviews before they ship. If the transfer isn't spectacular, I'll definitely cancel. I can deal with sub par transfers on bargain Blu-Rays, but not for a $30 disc. I'm hoping Sony did a good job though.

Considering the quality of Twilight Time's BDs for The Egyptian and Mysterious Island, I'm sure it'll be amazing. Despite Sony not caring to release these films, I believe they did the transfers, and Sony are usually known for stellar transfers, I'm told.

Ordered mine as well. Based on my obsessive page refreshing, the pre-order seemed to have gone up around 2:55pm.

I wonder if Twilight Time sends out advance review copies- Mysterious Island just got reviewed on Blu-ray.com, a week after the release date.

I just ordered it. Twilight Time did a great job with the blu ray transfers for "The Egyptian" and "Mysterious Island" so I am confident "Fright Night" will look excellent too.

"Rapture" is one hell of a great movie( IMHO, one of the best films of the 1960s). I've already pre-ordered the blu ray.

While I know that Twilight Time does ship out review copies, I don't think they actually mail them until they start shipping regular orders. It sounds like my buddy Kevin over at WTF-Films got his retail copy of THE MYSTERIOUS ISLAND before the screener, so make of that what you will...

Glad all of you seem to have gotten your pre-orders on. Hopeful as I try to remain on the limited market being a potential future for "niche" titles, with all the transparent bitching and moaning the supposed "fans" of Fright Night are making over Sony not making it a $10 title available at Wal-Mart, I'll be genuinely surprised if this thing sells out before the end of the year...

I get it, nobody wants to pay more for what's really a bare-bones catalog title release, but they refuse to accept the reality that Twilight Time themselves spelled out for them:

Sony does not care enough about Fright Night to release it themselves. They're literally so lethargic to the concept of selling 3,000 copies that they won't bother doing it - despite the fact that they already have a finished HD master and the perfect opportunity to with the remake... you know, bombing and getting everyone to talk about how much better the original was. It's like refusing to bend down and pick up a five dollar bill because, fuck it, it's not a benjamin or anything.

You know what else Sony isn't releasing on Blu-ray (at least not here in the States)? HOSTEL PART III.That isn't a 25 year old cult movie, that's a brand new fucking title!

I actually received both of my copies on Saturday, which was kinda neat. I do know that Twilight Time wanted to get review copies out earlier, but the final discs for MYSTERIOUS ISLAND didn't arrive until the street date. So there may well be advance coverage of their upcoming titles, but it'll depend on how quickly the stock arrives.

To those worried about the quality, I wouldn't. With rare exception Sony have been at the top of the pack when it comes to catalog transfers. Still, I'll be sure to post coverage of FRIGHT NIGHT and RAPTURE as soon as possible after my copies arrive.

What's that now, Kevin? You say you've got an extra and now largely un-needed copy of THE MYSTERIOUS ISLAND kicking around the house? ^_~ (I kid! ...I think.)

I know any number of QC checks or unexpected delays can hold up DVD/BD production at literally any step of the way, so a reviewer getting copies the same time as a customer really isn't a big deal in my eyes. But I'll grant that these new Twilight Time releases cost substantially more than a new release via Amazon or Best Buy, so I honestly don't blame the people who are waiting for the reviews/screenshots before they decide to make their purchase.

I have little doubt the Fright Night Blu-ray will look and sound fine, what with Sony's catalog transfers having been some of the best around (short of extenuating circumstances - DRACULA, and so on). I'm sure this'll be whatever older HDTV master people seen for a couple years now, but I guess we'll just have to wait and see how nice that looks with a healthy bitrate at 1080p...

For me the big question is whether Fright Night is going to sell out in a week, a month, or... who knows, maybe never? It'll be interesting to see a notably more contemporary film than Mysterious Island or The Egyptian does with the "3,000 Units" model.