I Have The Worriedest Boner 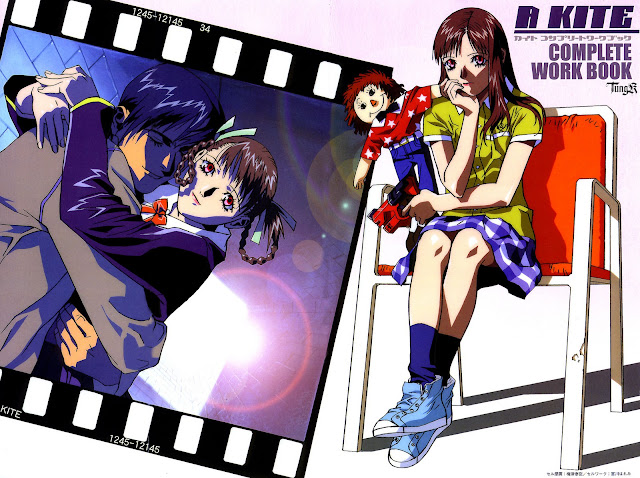 Did I ever tell you guys that I saw the A-KITE COMPLETE WORK BOOK at an anime convention several years ago, but couldn't get the attention of the guy behind the counter fast enough? I watched some five-foot tall gothloli, who I fucking swear looked like she was 15, buy it right in front of me based on the fact that I figured I had a 10 second window to scan over the selection without jumping up and down like a 'tard. True story, Hand of God. I'm still pissed about the whole thing, though I guess the blow was softened ever so slightly by the lingering thought of a 15 year old gothloli violently schlicking to glossy images of cartoon adolescents being violently molested by grown men... we've all got to start somewhere on that Road to Hell, right?


Anyway, Media Blasters has announced Umetsu's lolita-infused action masterpiece, A-KITE/カイト, is coming to Blu-ray in both "18+ [Edited]" and "18+ [Uncut]" versions courtesy of their Kitty Media label. Part of me is dancing in the streets at midnight at the mere thought of watching A-Kite in delicious 1080p... but mostly I remember, with clenched fists and slitted eyes, what a pitiful clusterfuck Legend of the Overfiend was on Blu-ray.

Media Blasters is about as hit or miss as a publisher can get, so while I'm keeping a close eye on this one, I flatly refuse to get excited until the product is proven to actually exist and I've seen for myself wither it's a proper 35mm sourced transfer from start to finish... it's sad that I have to state both of these up front, but Urotsukidoji was such a new low for Media Blasters that I really can't give them the benefit of the doubt.

UPDATE: The listing for the "Edited" version has now been replaced with a 16+ rating and a 45 minute runtime. So, the "Edited" Blu-ray will be the completely sex-free Anime Works cut, not the slightly edited 'Director's Cut'. Makes sense.
at 9:00 PM