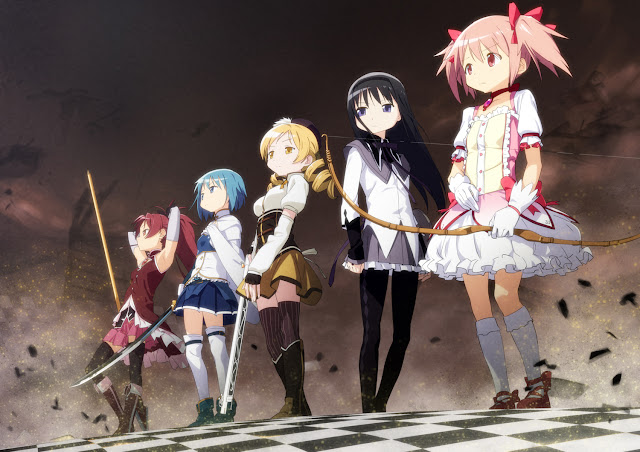 For those of you who are perhaps a bit less willing to take a chance on a contemporary and cute looking anime series about "magical girls", allow me to inform you that the breakout anime series of 2011 was SHAFT's original 12 episode fantasy Magi Puella Madoka Magica/法少女まどか★マギカ, and not without damned good reason. The script was handled by Gen Oribuchi of Requiem for the Phantom fame (and, I suppose, Blassreiter infamy...), character designs by Hidamari Sketch creator Ume Aoki, and the director was none other than Akiyuki Shinbou, director of Portrait de Petit Cossette, Bakemonogatari and Sayonara Zetsubou Sensei - among many other notable projects over the last decade.

With the passing of Satoshi Kon, I sincerely think that Shinbou might be the single most unpredictable and fascinating animation director in Japan today, which is exactly why his absolute lack of consistency - sometimes over the course of a single series - drives me absolutely mad. Magi Puella Madoka Magica (or "Magical Girl Madoka of the Magus") is perhaps his most consistent and polished series yet, with his eye for experimental and minimalist animation techniques used only when they're legitimately appropriate to telling the story, as opposed to a number of other titles Shinbou's directed, where the sudden shift from lush, detailed animation to Escher and Argento inspired surrealism with little to no actual animation was just a desperation move to distract viewers from how limited SHAFT's budget and schedule left the final product.

Early promotional material made Magi Puella Madoka Magica look like an explosion of moe-infused cotton candy, but the actual product was more akin to cinnamon flavored Mentos caked in dried blood and served with fresh tears. Madoka Magica was less a celebration of the "Magical Girl" trope than it was a cruel dissection thereof, dragging the genre kicking and screaming from the grade school fantasies of yesteryear into the violent, angst ridden and all too finite world of adulthood. While the show is far from the most explicitly violent thing to ever premier on Japanese television, it's broad aesthetic appearance of innocent sweetness combined with a focus on literally destroying young girls, piece by piece, until only their bitterness and sorrow remain makes it one of the most surprising and brutally despicable Japanese TV series in recent memory.

As cliche as comparisons to Hideaki Anno's 1995 Neon Genesis Evangelion likely sound these days, Madoka Magica is literally the post-modern exploration of themes so deeply embedded into Japan's unique fantasy culture that have - much like the nation's love affair with young boys piloting giant robots to defend against invading alien forces - become so infused as an archetype most fans simply don't analyze it much anymore.  It's just a part of the culture, of the fabric of anime as we know it today, and being a smart, dangerous inversion of that simplicity is what makes both of these titles carve out a narrative that's familiar and unthinkable all at once. Both Madoka and EVA have an acute focus on esoterica in their mythology, both have a cast of stable archetypes which are slowly twisted and broken down into something totally alien and "real", and both have left the international public truly stunned, only wanting more. SHAFT and Aniplex are clearly listening, as a trilogy of Madoka Magica theatrical films have just been announced - the first two being remakes of the TV series, and the third being an "all new" story - again, if coincidentally, mirroring the theatrical revival of EVA nearly 15 years ago.

For the American who wants to get his hands on the series outside of far too often poorly translated HDTV rips*, Aniplex of America has crafted a fascinating compromise between the uber-expensive Japanese release and the expected bilingual and bargain-minded American DVD market. Each disc will feature 4 episodes, and will be available in three distinct flavors:

You're not misreading that, I promise: That's $120 for just the Blu-ray, or $225 for the Limited Editions. That extra coin gets you, according to the Madoka Magica USA Official Website, a collector's box of somesort, a 24 page translated booklet, an original soundtrack on CD, a poster, sticker and postcards. The paper goods are an exclusive for the US release, which is actually pretty cool, but $105 extra for three deluxe editions is a pretty damned stiff premium! Keep in mind that Japanese fans paid roughly $90 for six individual volumes, so even this is a bargain in comparison. (For what it's worth, Japanese buyers also got director's commentaries and an exclusive Digipack with a transparent sleeve for every volume.)

What's slightly more troubling is that the already limited number of bonus features has recently changed: The creditless ending sequence has disappeared, though a "Music Video" for Kalafina's haunting theme, Magia, remains. A strange omission, to say the least, but as long as the theme itself is still present in the show no harm has been done, I suppose. I don't demand bonus features when the content is strong enough to stand on its own, but for the plans to be changing long after the specs were released to RightStuf is... troubling. One can only hope that the content itself isn't changed during the production of the US release, something I can't say for the similarly expensive Bandai singles of K-On!, which not only got shafted with DVD quality audio and lost all of the Japanese on-disc extras, but also had some exceptionally random musical cues replaced on both the Japanese and English audio tracks.

Aniplex USA has mostly repackaged Japanese Blu-ray releases for their US release up until now, and they've seemed to consistently release high quality, Japanese styled R1 DVDs... with high R2 prices to match. While Madoka Magica is really a phenomenal show, it'd be ignorant to say that the price isn't damnably high for it, so while I'm still willing to purchase the show I'm really, REALLY hoping they don't fuck the presentation up in any way. Even $40 for 100 minutes of content is pretty steep when FUNimation and Media Blasters regularly sells an entire 12 episode series for about fifty bucks, forget the price of the Limited Edition combo packs! For that matter, why the hell do I have to buy a useless DVD just to get the other goodies? What sort of sadism is that?!

Unfortunately, I've already opened Pandora's Box by buying those two Rurouni Kenshin OVAs at $50 a piece. With as fantastic and unprecedented a series as Madoka is, my fate is already sealed... the only question left is whether I go for the Blu-ray singles or the box sets. I do love me soundtracks, and the promise of 4-panel comics from the original designer in the booklet is a nice touch, but this is simply not an investment for the faint of heart or those who weren't absolutely blown away by the third episode of the series.

*For reals. Just because the LATIN NAME of the show is "Puella Magi" doesn't mean you need to use that as your translation for 'Mahou Shoujo'. It just means Magical Girl, goddamn it, and it makes some of the dialog virtually incomprehensible when you try to be pretentious about it. Thankfully the term "Witch" is one native to English and Latin, so that one led to substantially less fansub-fueled RAGE!! on my part.
at 12:05 PM