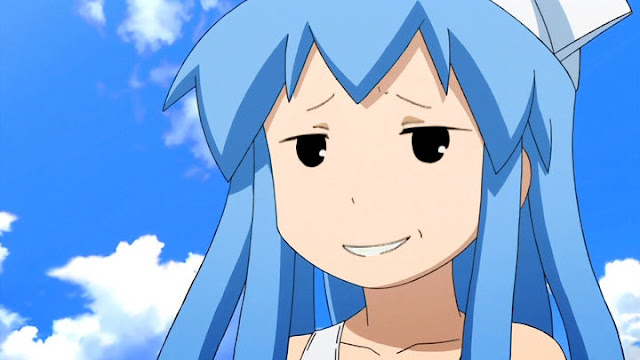 Yeah, I just Blu'd myself. What's the squidding problem?
Forgive a moment of unfocused and incessant disgust... it's been a long ass week, and I'm just in the sort of mood where I'd like to see the world kicked in the balls. Repeatedly.

So, here's a fun little story: Back in August, someone asked Media Blasters' Faceplace if there was any chance of seeing the 2010 comedy anime SQUID GIRL/侵略！イカ娘 on Blu-ray, and not just DVD. As you can see, Media Blasters' public relations guru and CEO, John Sirabella, replied with a pretty straight forward negative:


"Not sure about Bakuman but right now I do not see a Blu Ray of Squid Girl."
The first DVD came out at the tail end of September, and the second DVD is due to ship the first week of December. I was ready to shrug it off as a sign of the times; Blu-ray replication is still expensive and anime consumers willing to pay for it are few and far between, so the fact that this title was destined for an SD only release was pretty much the natural result of the dwindling mar--

So let me get this straight: They're taking pre-orders after lying to their public and convincing them to spend $25 (minus the usual discounts) on the first DVD? And it's coming out, like, 3 fucking months after the second DVD - not a year, not six months, but three?!

I realize that a history of substandard quality on DVD and delaying even your few decent Blu-ray releases by anywhere from 3 months to a fucking year has left even the most dedicated of Media Blasters employees with a minimal sense of shame or pride, but to announce it as coming out 3 months after the second DVD - much less announcing it AFTER he's told the public to go buy the DVD, 'cause there ain't no fucking Blu-ray in sight? For real-real?

That is booooooowlsheet to the max.

By the way, dunno if you've picked it up already, but the Cowboy Bebop BD is currently about $9.50 on Amazon until the end of Monday, I'd assume. May not contain surround audio, but the PQ appears to be real good. I picked it up for the price.

Just a shame Bandai seems to have given up on releasing Blu-ray in the States. Actually, when's the last time they did an anime BD release in Japan?

Any opinion on The Sky Crawlers? Know nothing about it; $9.50 also.

Aaaaand considering picking up some Bond Blu-rays, the Connery ones. Any opinion there, on both the films and PQ? The screencaps I've seen look...um...uuuuhhhhhhh........

Thanks for the tip! Most of those Sony/Image discs generally stay in the $9~11 range, but with the stereo mix and lack of bonus features I wouldn't mind snagging that as cheaply as I can. The JP release may have the original 5.1 mix and a (slightly) better encode, but it's not worth just shy of a hundred bucks!

Bandai Entertainment doesn't have nearly as robust a schedule as FUNimation or Anime Works, but they've released a handful of movies in the last year or so: The Girl Who Leapt Through Time, Gundam 00: Awakening of a Trailblazer, &The Disappearance of Haruhi Suzumiya have all come out in 2011, and by all counts these releases have been perfectly fine. I have the Eureka Se7en: Pocket Full Of Rainbows BD, and unnerving English time-and-place subtitles replacing all of the JP text aside, it was a stellar presentation.

For TV shows, however... well, early reports say there's nothing wrong with their Star Driver BD and that's encouraging. They released Kurokami in 4-episode dub-only releases to a rousing chorus of "Who gives a fuck?". The "Bandai Entertainment" release of K-On! is essentially the Japanese licensors making the release themselves and using Bandai as a consultant - which means it's being sold as marginally expensive singles, lacks relevant bonus materials, and to top it all off the audio materials have been (slightly) edited and are DVD quality Dolby 2.0 tracks. It's basically a release I would have expected from 2002, not 2011, and Mrs. Kentai - having already spent a fortune on Japanese merchandise for the show - gave up after the first release. (It's still sitting in the shrink-wrap, I think.)

For what it's worth, Bandai Visual is a ghost at this point. But at least they come back to haunt us every year or so to release the next episode of Gundam Unicorn.


Never seen The Sky Crawlers, though at that price I'd consider getting it sight unseen. The film's promo reel LOOKS gorgeous, but it's sure to be yet-another-Oshii-project, which means it'll be lovingly rendered action set-pieces peppered through a piece of philosophical wankery that's half mad genius and half pretentious bullshit. Don't get me wrong, I have an unending well of respect for Oshii as an artist, but if I doubt I'll need to sit through Avalon and maybe Innocence more than once. If you've only seen Ghost in the Shell, consider that his most accessable and mainstream film... which, now that I think of it, is kind of a terrifying thought. (I *HEART* me some Angel's Egg though, make no mistake!)

The 007 Franchise was an old fashioned Lowry Special - all of the film grain was removed and then added back into trick the viewer into thinking the heavy processed video was still made of 35mm. Do they look great? Not really. But they're a hell of a lot better than the DVD, and I think it's safe to say the chances of seeing Connery get new 4k restorations is roughly jack divided by shit.

And what's the word on the FLCL BD set? Heard some outcry that it's an upscale, but considering it appears to have been made digitally in SD, that's...all anybody really could do. So's it good, or passable? Better than the DVDs? Only ever seen the show dubbed (ugh...) and dunno if I really like it, but it's gonna be an Amazon lightning deal on Monday and figured I may get it if it's cheap.

...And maybe the first season of Pokemon because I'm a fucking retard. Mostly just for nostalgic reasons. Wouldn't ever go beyond that first season, though, 'cos...that's all I'd ever seen, I believe.

The fact that FLCL is an upscale isn't a problem, exactly. The problem is that it looks like this.

Unlike the majority of FUNimation's in-house SD upscales, this was a master provided by the Q-TEC posthouse in Tokyo, which favors an overly aggressive filtering chain to smooth over aliasing and then re-sharpen edges using "warpsharp" methods, which can (and do) distort outlines into funky looking half-smeared, half-sharp monstrosities.

Mind you, the show's insanely frantic motion doesn't make the DVDs a particularly appealing alternative. The Sync Point R1 release has a bitrate that regularly spikes into the 9s, but it still degrades into nasty pixelation on an almost regular basis - so even with the garish sharpening artifacts I'd recommend the BD as the lesser of two evils.

Having already bought the show on DVD (and owning that sweet, sugary artbox!) I just couldn't justify the double-dip. Maybe if Amazon drops the price to below $15 I'll crack, just for the raw, unsafe love of pure Gainax insanity with minimal compression issues...

I never thought Play-Doh could mimic the look of 2D animation so well.

Eeeeeyuh... Maybe if Amazon's price this Monday is low I'll get it.

Fuk'rs! I just bought the first half of Media Blasters' Squid Girl since there wasn't going to be a BD release.

How good/bad/schmidty is Dragon Ball GT? Just bought both season sets for $12.50 each.

How bad is Dragonball GT? That's like asking how bad Leonard Part 6 or Manos: The Hands of Fate are... Hell, FUNimation themselves skipped the first 16 or so episodes for the initial US broadcast!

But don't take my word for it: Michael "VegettoEX" LaBrie, the webmaster over at over at Daizenshuu EX, has been running the site since 1998. In short, he's got to be the closest thing to a professional Dragon Ball nerd out there - and I mean that as a compliment, I really do. You won't find many people who eat, sleep, breathe and are Dragon Ball more than this guy, or at least not that speak English, and he's done more reviews of the series on various formats (manga, DVD, video games and so on) than I think most mortal men can comprehend.

Mike is about to start re-watching GT from start to finish for a comprehensive series review. With plans having been made public, one of the podcast listeners sent a Paypal donation with the express instructions that it be used to buy alcohol, just to make surviving the re-watch bearable. If VegettoEX himself can't stand to watch Dragon Ball GT without a good buzz going, well...

Slightly better encode my asshole! There's EE that's nowhere to be found on the US BD! Seems Image were able to get there hands on a raw non-insanely windowboxed master from BV ala Akira.