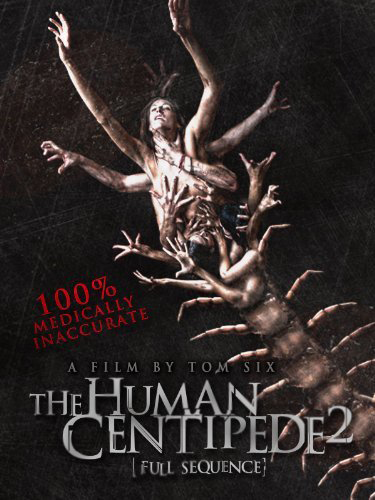 The Australian Classification Review Board has officially BANNED THE UNCUT VERSION of Tom Six's The Human Centipede 2 [Full Sequence]. Monster Films was shocked enough that the Australian Classification Board (formerly the OFLC) passed the film as R18+  without ordering any cuts, but the ACRB can legally usurp the ACB's decision and choose to ban a film, even when a prior government agency has said it wasn't obscene.

What the hell is wrong with Australia? Who has a tax-payer funded board who's sole purpose is to decide what is and isn't appropriate for any given audience, and THEN have a second rung of assholes who decide if the first board actually did their fucking job? After the same group did the very same thing TO A CUT VERSION OF A SERBIAN FILM I can't say I'm surprised this is the outcome, but why have a secondary branch who's sole purpose is to bow to outside pressure? The ACRB don't spend each and every day rating films, they literally just wait for someone to complain loud enough and then decide wither or not they agree with the ACB's professional decision!

Australia, I don't hate you. You've given us awesome things like the platypus, Mel Gibson, pizza with barbecue sauce, the electric drill and The Loved Ones (the latter of which couldn't exist without the former). A dear friend of mine will soon enough be an Aussie by marriage, and I'm glad someone made her happy - even if all of her new relatives speak in such a way that I'll forever assume they, just occasionally, wrestle the shit out of crocodiles. But none of that changes the fact that YOUR RATINGS SYSTEM IS COMPLETELY FUCKTARDED. I know I'm getting way too upset about a film that isn't even all that good, but it's the principle of the thing that just chaps my ass! We're back to waiting, literally just hoping that Japan, Austria, The Netherlands or who knows where to give us sweet, unmolested centipede rape.

No, actually your comments are conservative if anything. After years of the UK going down the dark path,they finally stepped into the light and here comes Australia banning video games, film and anything that doesn't contain booze or violent contact sports. Keep up the tirade and fire bomb when appropriate, ultimately we have no choice either way.

Australian censorship is weird; the fact that religious groups, misguided feminists and populist braindead politicians can call to the fore the anonymous Review Censors to ban stuff that has already been rated is completely aggravating. We are also stuck in a classroom/prison situation whereby to call attention to the far-out shit that is available legally would end in the legal stuff being made illegal and not the converse. Human Centipede 2 was a foregone conclusion, as soon as it became a media football. The same distributor, Monster Pictures, had an uncut version of LIFE AND DEATH OF A PORNO GANG passed without fanfare since it wasn't such a perfevid column filler in the Murdoch press. I personally don't believe in censorship; HC2, so foul, so amusing, so legal for a month or two on big screens in Australia, made me wonder however, whether audiences deserve it!