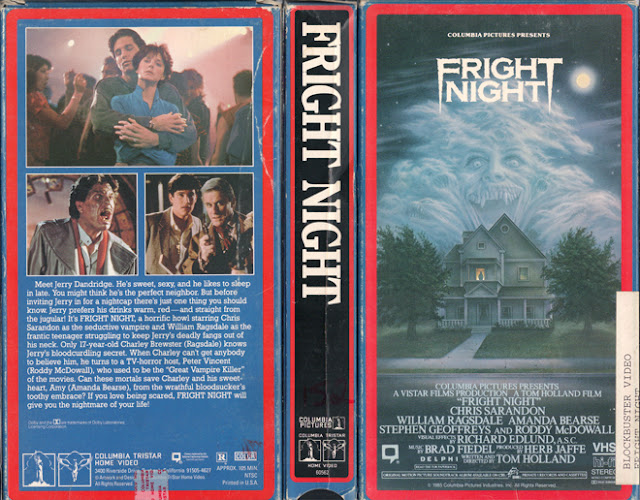 Yeah... this film has no other posters to speak of.
So I'm leaving... Thursday? Thursday. Packing like a madman. Blithering like an idiot. Had to share this before I pass out for a few fever-dream induced hours and continue on my maddening trial. Also, do you have any idea how many DVDs Kentai owns? 'Cause I hadn't taken much stock over the years. "Two big-ass Wal-Mart bookshelves with additional shelves stolen from a third full to bursting" should have been a sign that I was a very special episode of Hoarders in the making, but hey, I guess that's still cheaper than doing rock on a burnt mattress in an abandoned warehouse. (Wait, is it?)

But forget my insanity for a sec - let's talk about movies 'n' stuff. Screen Archives Entertainment has officially sold out of FRIGHT NIGHT. Proving once again that all the ferocious internet bluster in the world doesn't mean much; people buy what they love and ignore everything else. Glad I pre-ordered mine the day it was available and didn't miss out - looks great, sounds fine and the window closed less than one week after the "official" release date, which is probably the best Sony Pictures and Twilight Time could have hoped for. And now, just for everyone that was bitching and moaning about $35 shipped, eBay auctions are already getting bids at $50 minimum, and some of the buy-it-now copies are $250! Ah, collector's markets...

Of equal note is the fact that they evidently saved aside 100 copies for writer/director Tom Holland to autograph. Cool, right? Are they giving those out to the first 100 people who pre-ordered or randomly sending them out to lucky fans as a sign of good will? Fuck no! They're actually giving them away to anyone who orders $100 worth of Twilight Time DVD/Blu-ray titles for free. Now I get it, Fright Night is probably going to sell better than Stagecoach and The Roots of Heaven, but maybe some of those hold-outs will see this deal and break down anyway, right? It's a clever way to move more of their other titles, and sounds like a nifty little extra incentive... but they announced it AFTER the title was available for a week, all of the pre-orders had shipped, and they had already said that less than 500 copies remained.

All of those guys who actually pre-ordered Fright Night and showed their support a fucking month before it was ready to go? Y'know, all those assholes like you and me - the target goddamn consumer? Evidently we don't get the extra-cool shit, not unless we really, really want Rapture and The Egyptian and The Picnic for $35 a pop. That's just cold, man. Thanks for showing the people who crashed your shitty servers just to get their copy the day pre-orders went up where they can stick it, Twilight Time.
at 2:00 AM

Yeah, I felt kinda shitty too when I read about the signed edition, having pre-ordered Fright Night. But I honestly don't know that I would have ordered $100 worth of other stuff. Or that I would have been one of the first 100 if they offered the deal during pre-order, with the servers crashing. I'm just happy that I got a copy at all.

I wish I had known about the signed free copy before I pre-ordered. I had planned on getting Rapture, Picnic and My Cousin Rachel (I already have Egyptian and Mysterious Island).... so Fright Night free would have been a NICE bonus. Not too happy about it. Makes me rethink wanting to purchase from them ever again.

Shit, all the SAE sales and combo deals made me kinda depressed. First there was a Fright Night Blu-ray plus soundtrack CD money-saver combo, but I'd already bought both; then other shit which I was too bummed to even pay attention to, to be honest, and here I'd bought all the other then-available Twilight Time BDs along with. Bogue...