Meet Me At The Echo Bridge Quad 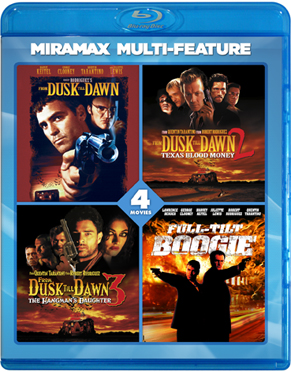 WHY DO I KEEP DOING DUMB THINGS?!
Yeah, yeah I know... here I am being part of the problem, supporting the absolute bottom of the bargain barrel release instead of throwing all of my money at "respectable" presentations to ensure that the market pulls towards quality over price. Buying crappy releases ensures that we'll only get more crappy crap in return, and the only way to turn it around is to support the niche players who still give a shit - these are tenants I've spoken of for years now, and they remain just as true now as they always have. I haven't given up on the cause... I'm just having a poor white trash moment. Going to Wal-Mart to buy milk and cat litter can do that to any man, damn it!

Besides, I've got my Fright Night pre-order in, I recently bought Intruder straight from Synapse Films, I can't even fucking REMEMBER how much money I spent on movies during that caffeine and Mastercard fueled Black Friday and Cyber Monday shopping spree, and I just put in $225 worth of pre-orders to satisfy my Puella Magi Madoka Magica addiction. I'm dead fucking serious: 12 episodes with CDs, booklets and some paper trinkets for $224.94. The entire Blu-ray industry can blow me because it's already got all of my money, and the only way I could possibly put more back into it was if I started buying movies I actively didn't like.

I mean come on, it was $10. TEN BUCKS for From Dusk 'Till Dawn, it's substantially less respectable direct to DVD sequel, its equally - if perhaps even more loathed? - direct to DVD prequel, AND the feature length Full Tilt Boogie documentary. How can you possibly beat that deal with a stick?

And what could Echo Bridge do to make this dream team of low price and high content possibly fall apart? I'm glad you asked, sir! Best known as the company that creates half of the DVDs you find in Wal-Mart's $5 bins, they were quickly derided - often solely on principle - for using whatever crumby HD masters Miramax gave them, with very little being done on their part to improve the situation. Not that I imagine the audience for Dimension "classics" like The Crow 2: City of Angels and Halloween 6: The Curse of Michael Meyers were expecting lavish collector's editions to start with, but it would have been nice if, say, Dracula 2000 had been framed properly or if Children of the Corn 3: Urban Harvest had been given an IVTC so it was presented at 1080p.

Another troubling aspect is that they'll do separate encodes for stand-alone features and double features. When From Dusk 'Till Dawn was released on a single Blu-ray by itself, the bitrate was about 25% higher than it was for the Double Feature disc which included Scott "Intruder" Spiegel's sequel. Why? Because the Double Feature Echo Bridge discs were actually squeezing two feature length films onto a single BD25! Two movies, one layer... obviously something has to give, and when your stand alone releases have nothing in the way of bonus features or alternate language tracks, bitrate is about all that's left. With that horrifying knowledge in mind I just had to see first-hand how awful these Quad Feature discs really were..

From Dusk 'Till Dawn looks... well it's passable, if not actually good. There's some obvious compression artifacts that love to crop up during especially grainy or fast moving shots, but it's only a minor annoyance compared to what I had expected going in. It looks considerably better than the average HDTV broadcast or a Netflix HD stream, and having owned that Dimension Collector's Edition DVD for longer than I can remember, words can't properly express what a massive upgrade this transfer is over that non-anamorphic turd. It could certainly look better, but try as I might, I just can't get that upset about what I'm seeing. Remember: Low Expectations = High Payoff!

Texas Blood Money, however, are my worst nightmares realized. The bitrate is only a slight step down, but if you were to walk in on this sucker playing you'd probably think this was just a crumby DVD-R size HDTV rip - not a mass market Blu-ray. It looks like absolute shit, but why it looks so much worse than the other two 35mm sourced feature films on the disc, I really can't say... all I can do is chalk it up to poor encoder implementation, 'cause seriously, even at low bitrates like this the image shouldn't look that ridiculously pixelated. I think I actually feel embarrassed for Echo Bridge over this one - and I actually gave them money for this fucking thing!

The Hangman's Daughter is an interesting compromise. Compression artifacts are rarely an issue, but the film is in a state of extreme soft focus seemingly from start to finish, so there isn't much in the way of mathematical complexity to choke on. I don't know off hand if we're seeing a transfer that's been intentionally defocused before compression to avoid ugly block artifacting or if this was a stylistic choice by the film's director to start with, but in either case the final results are infinitely more watchable. Except, of course, when you get the occasionally dreadful CG element that looks like it was sourced from a BOB deinterlaced Digibeta... but that's neither here nor there, I guess.

And as for Full Tilt Boogie... well, it looks good enough. We're talking about a documentary that's a combination of feature quality 35mm, fly-on-the-wall 16mm blown up footage, and even analog video printed to film! It looks like asshole on a variety of levels, but it's mostly just talking heads and extreme grain to start with, so despite being the "worst" transfer in terms of raw bitrate and quantizer issues, it's also the least offensive part of the set to have those sorts of issues to begin with. It's essentially a bonus feature, yeah? The fact that it's even from a legitimate HD source was a surprise, so the fact that it was lowballed in the bitrate department isn't going to keep me up at night.

At the end of the day, we're talking about 6 and a half hours of HD content on a single BD50 complete with lossless audio, with not a scrap of disc space being wasted. It's goddamn ridiculous, and this really isn't where I want to see the format turn to... and yet, here I am buying it anyway. Just because it's ten fucking dollars. For that price, the quality is acceptable; it's not something I want to see become the norm, clearly, but if this is where Miramax's endless catalog titles are going to go, I won't very lose much sleep over it.

Does From Dusk 'Till Dawn deserve better? Of course! And for what it's worth it's already got better releases in Canada, Japan, The United Kingdom, and likely other corners of the world I'm not paying quite as much attention to. Though the moniker has never been applied to it (and never will be), From Dusk 'Till Dawn was essentially the trial run in Robert Rodriguez and Quentin Tarantino's Grindhouse double feature, something I still consider the best 3 hours and change in a theater to be released in the 21st century. It's a legitimately great piece of genre-fusion entertainment, funny and smart when it needs to but never at the cost of being a viscerally satisfying joyride. I'm deeply disappointed that I even have to import if I want a Blu-ray release that has any actual bonus content, considering the material is already held by Miramax - but that's just the name of the game when the studios simply stop caring about their back catalog and hand it over to a third party that manages to care even less. Sales are in the toilet, and our friends at the Weinstein Company (or at least those they've contracted to do their dirty work) are smart enough to know that people will buy movies, even amazingly shitty movies, when you can grab four of them for less than the cost of the pizza you'll devour while you watch them.

There's nothing WRONG with the From Dusk 'Till Dawn Multi-Feature Quad Blu-ray. It's a bargain bin release that promises several hours of High Definition schlocky fun for next to nothing, and delivers as promised. You can't just order crab and then be upset you didn't get lobster. It doesn't look perfect, but after reminding myself that I've spent just as much much on Blacksploitation or Kung Fu films that were literally 3 chewed-up VHS tapes recorded onto a single layered DVD, I stopped being so damn ornery about the whole thing. It is what it is - no more, and no less. But what does all of this imply for All of Those Shitty Hellraiser Sequels, The American Edits of Project A and Armor of God, or God help you, This 'Wes Craven Presents' Monstrosity? Based on what I've seen here, these Multi-Feature discs are probably "good enough". They're never going to knock your socks off, but if you need a fix of B-movie magic that won't break the bank, they're sure to leave you adequately satisfied.

Just do the whole industry a favor and buy a better Blu-ray next time. The fewer labels we see needlessly squeezing 3 hours on a BD25 layer, the better.
at 12:31 AM

Hmm, I got the FDTD/FDTD2 disc a while back but I haven't watched it yet. The screenshots of the single FDTD disc (which apparently has a higher bitrate: http://www.avsforum.com/avs-vb/showpost.php?p=20469670&postcount=3068 ) looked better than the over-processed Canadian BD. I knew I should have just gotten the version without FDTD2 but I convinced myself that there was no way they'd go to the trouble of doing 2 encodes. Looks like I was wrong, but I'll probably be able to just rent the JP version when it comes out, so no big loss.

I think the "Single" FDTD Blu-ray had an average video bitrate of 20 Mb/s versus the 15 we've got on the various Multi-Feature releases. Much as I wish I could shrug Echo Bridge as the first company to cram 3+ hours onto a BD25, they aren't: Mill Creek's Gamera Double Feature is two feature length kaijuu flicks on a single layer disc. I honestly wish I was more upset about that, but considering how small the target audience for a fucking Gamera Blu-ray is in North America coupled with the fact that it sells for less than eight dollars... eh, whatever.

If I'm not mistaken, the best release to date is Alliance's new Steelbook Special Edition, which features a port of Echo Bridge's 20 Mb/s transfer AND all of the bonus features found on the old Special Edition DVD (commentary, outtakes, deleted scenes and so on). The only thing you don't get is Full Tilt Boogie, which - being a feature length movie unto itself - is probably just a licensing snafu. Kinda wished I'd grabbed the tin when it was selling for about 18 Loonies...