Craven's "Talent" Finally Gets Its Blu-ray Due 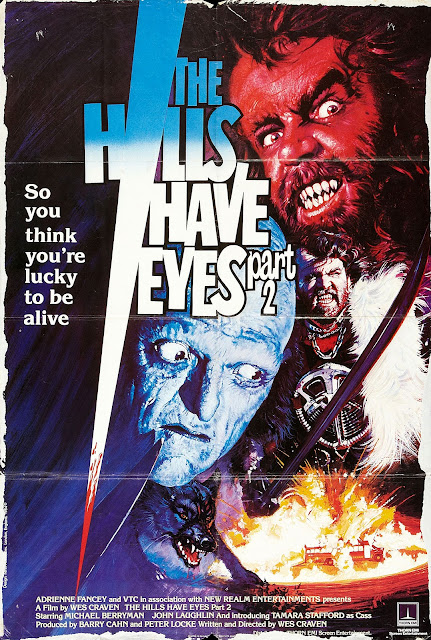 I went over how the Image Entertainment Blu-ray of Wes Craven's inbred cannibal classic, The Hills Have Eyes, was a particularly underwhelming SD sourced upscale. Though I'll admit some aspects of the film have aged poorly, the solid performance of the heavily deformed character actor Michael Berryman, unconventional take on what it means to be "family" on both sides of the Kindly Cityfolk vs Desert Cannibals divide, and the sudden, brutal downer of an ending have kept the film fresher than a great many drive-in exploitation features of the true American independent era that changed permanently with the introduction of "Direct to Video" entertainment. Honestly, I'd say the film was pretty good, if it weren't for the fact that High Tension director Alexandre Aja basically destroyed the original with a remake which, despite being far less socially relevant than its predecessor, is every bit the visceral superior and managed to be so while not only stealing, but improving on virtually every set piece that made the original a legend to begin with.

I've also briefly touched on the fact that Wes Craven's sequel to The Hills Have Eyes - the cleverly named THE HILLS HAVE EYES PART 2 - has long been thought of as one of the worst sequels to anything... ever. Perhaps it's the fact that Papa Jupe and Pluto have somehow, magically, returned from the dead? Maybe that it's a film about Motocross douchebags? Or how about the fact that the goddamn dog gets a flashback? Whatever it is, the film's crappiness is a thing of legend... and the fact that such an infamous train-wreck gets a brand new transfer that looks like this is the sort of thing that just makes me want to give up buying movies completely... not because they did it wrong, but because they did it right for a film that, even the creators themselves insist, deserved nothing.

Thanks for sharin', Adam!
I'm actually more sad at Kino's greatness here than I am at Image's bullshittiness. Is that weird? We all know I'ma dick and as such and I'll be the first to say that it looks like it's got some pretty funky looking gray-scale banding, but fuck me running... this still looks ten times better than Maniac or Henry: Portrait of a Serial Killer.  I'm also willing to bet the print has been cleaned twice as hard as Basket Case, though I'll have to wait and see it for myself.

And, yes, I'm actually going to buy this horrible piece of shit. Not because I WANT it, exactly, but because I tend to throw money to reward companies for doing the right thing... even if it's with something this wrong.

Good for you, Kino/Lorber. You've shown a shitty cash-in that even Wes Craven, a man proud of all four Scream films has dismissively called "a paycheck", a hundred times more respect than the actual classic that spawned it. If you truly love B-movies or Wes Craven or want to see cinematic obscurities still trickling out in High Definition in  general, for the love of fuck, give 'em fifteen bucks. They've earned it harder by restoring this cinematic deuce than the average Pink Salon worker after a double shift!
at 9:03 PM

I held off from buying THE HILLS HAVE EYES PART 2 *for years* on VHS based on its universally terrible reviews, so when I finally stumbled across it for $0.99 in a Blockbuster bin sometime in the late '90s I decided to give it a chance -- only to end up *really* enjoying it! (You have to admit, most horror flicks of the late '90s were pretty horrible and anything would look good in comparison.) Accordingly, I pre-ordered the Blu the day it was announced. I'll be curious to see how the flashback footage (a few duping processes away from the original negative) looks compared to Image's "hi-def" release of the first film.

It's for all too similar reasons that I'll be picking up Synapse's Blu-ray release of 42ND STREET FOREVER. Will MB's "Zombie Holocaust" feature, or Synapse's "Dr. Butcher, M.D" trailer reign supreme?

I can't justify forking over the money for this no matter how good it looks... BUT I have been snapping up every one of Kino/Lorber's Redemption titles. They all look pretty terrific (even if next to no work was done on actually cleaning the image of dirt and scratches). I'd rather have a dirty image than a processed one of course.