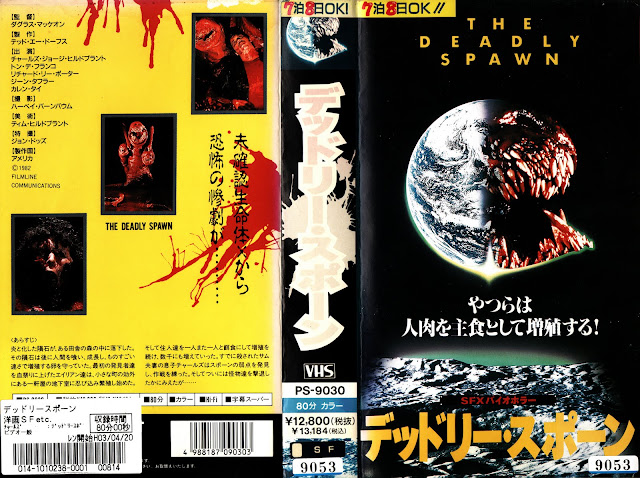 A word of slightly belated warning: Don't waste a penny on the newly-resurrected Elite Entertainment's Blu-ray release of the 1983 independent splatter film THE DEADLY SPAWN. I'll spare you an exhaustive comparison because I feel that my friend Kevin at WTF-Films has done quite admirably in showing off what a shockingly wretched pile of upscaled worse-than-the-DVD dogshit this release has turned out to be. Seriously, if this doesn't turn out to be the single worst release of the year, I'll consider suicide by eating my own pure shock on toast. It's clearly the same SD transfer Don May, Jr. created for the Synapse DVD in 2004, upscaled to 1080i and then caked in enough DVNR to make Predator blush... the fact that it got a two-out-of-five score on the video review at Blu-ray.com only serves to underscore that if I don't know what I'm talking about, then at least half of the critics doling out video scores must be legally retarded blind.

Making this even sadder is the fact that the film's producer, Ted A. Bohus, has been pimping this release leading up to its release on the Blu-ray.com forums. When faced with comparisons like those above, the best he can come up with is the fact that AICN liked it... despite the fact that Harry doesn't even mention the video quality. To Bohus' credit he threw together a few new extras that fans are sure to eat up, but I don't think a mountain of bonus content can make up for the feature looking - and I'm literally not exaggerating when I say this - substantially worse than the DVD from 8 years ago. But what's really crazy is that I got in touch with Don the other day over this - he's cool like that -  and he mentioned that, as far as he can tell, Bohus  never even got a Digibeta copy of the SD master. Now this is clearly the same telecine work Synapse did nearly 8 years ago - and that was scanned in SD to start with!

So how the heck did he come up with any sort of "HD" master when he didn't even have access to an archival SD one? I'll just let you guys use your imagination and come to your own conclusions... all I know for sure is that Don May has made a public offer to work with Bohus and do a proper Blu-ray release. With any luck this is just the first step in a larger, more satisfying epic of lulzy bullshit (as it was when Synapse restored THE ARIZONA NAILGUN MASSACE on DVD, under almost unsettlingly similar circumstances), but in the meantime, just don't say Kentai and a half-dozen other folks didn't warn you.
at 8:16 PM

if i only i saw this before my pre-order shipped. i couldn't believe how shitty it looked. not a single moment of "HD look".

So did Bohus (not Bahus ;) and Elite rip the DVD image and then manipulate that? The fuck's going on here? :p Wouldn't something like that be illegal?

I hope to goodness something can be worked out where Synapse does their own restoration and BD release. What crushing disappointment to see how awful this is.

At least the DVD is satisfactory if a proper HD release never comes out.

By the way, I contacted a dude who posts screencaps and has the Japanese Blood: The Last Vampire BD, asking if he could do comparisons between the telecine and digital transfers, to which he did. The former is an interesting curiosity, and would be fun to have with the other transfer for around $15, but certainly not worth the import price. Think I'll just get the US BD assuming it looks similar to the JP transfer.

Thanks for the correction Kriz - I was in a bit of a rush when I posted that. Should be fixed now.

Honestly though, I'd feel a bit worse about an honest mistake if mister Bohus weren't fibbing through his teeth about this release being in "High Definition"...

Belated thanks for the shout out, Kentai - I figured it wouldn't take too long for the stench of this one to reach you.