In light of The Hunger Games making $150 million in its opening weekend, I'd like to talk about the film that's basically the same thing... except, you know, not written for tween girls. 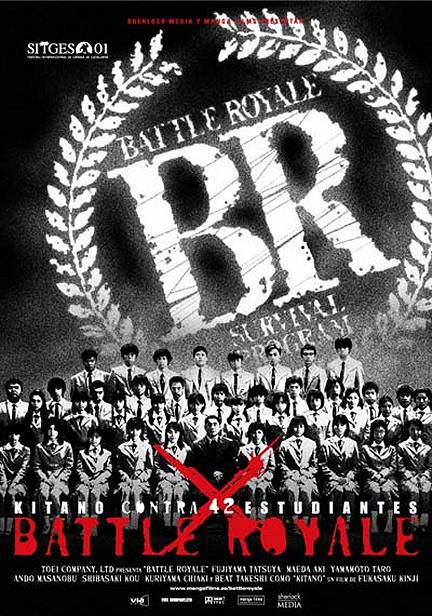 Kitano could have taken 'em all on.
With chainsaws.

BATTLE ROYALE: ANCHOR BAY vs ARROW VIDEO
-VERSUS-
BATTLE ROYALE: ARROW VIDEO vs NSM RECORDS
Pay close attention to the piping on Kuriyama-chan's jacket. On the US and UK masters it has a secondary, digital contour - essentially a smarter, more modern form of edge enhancement - while on the Austrian transfer it's softer and fades, quite naturally, at the edge. There's also more visible grain, implying that the Arrow transfer was hit with noise reduction first, and then had the edges sharpened after the fact to try and make up for the temporal processing. In short, the Austrian transfer almost looks like... well, it looks a lot more like 35mm film than the flat, digital presentation found on the UK release, and while I'm still convinced we're looking at an HD master cobbled together no later than 2002, at least we're looking at the scan without any digital manipulation.

The US transfer, however, has the exact same edges as the Arrow transfer. There's really no doubt in my mind that Anchor Bay took Arrow's pre-processed HD master and then tweaked the colors somewhat, boosting the contrast on certain scenes and shifting the color balance away from green, which has resulted in a more natural white balance at the cost of overly ruddy flesh tones and the expected loss in shadows (which were already a murky mess to start with). Anchor Bay's handling of the same exact material is overall superior, but... not by a lot. Arrow's HDCAM source materials were always the problem, and the early comparisons posted by DVDBeaver were - once again - about as useful as tits on a fish. This flick doesn't need a coat of digital paint, it needs a new scan from the ground on up... and in light of Battle Royale 3D, that isn't going to happen any time soon. Probably not ever, at this rate. This is what we're stuck with, and I for one am none too pleased about it.

The Austrian BD transfer remains the best presentation of the "original" 2000 Theatrical Cut of Battle Royale. Anchor Bay also managed to fuck up one of the few good instances of CG - a subtle fix when Kitano wrenches a knife from a dead girl's face - on the extended 'Special Version' by swapping it with the less convincing practical effect from the original cut. So, god help us, one of the few things the 2001 cash in got right is not even available on the US Complete Collection. Goddamn, guys, just... goddamn.

To draw this to a close, the two advantages Anchor Bay bring to the table are an English Dub for the Special Version, and the Theatrical Cut of the film's horrible sequel... oh, yeah, and the bonus features are now on an NTSC DVD. Y'know what, fuck Anchor Bay; for once, I'm NOT going to bother buying a movie I love again and again (and again). Were that less-terrible and not-English subtitled Austrian transfer less than $40 for the cheaper release - before international shipping! - I'd at least have considered it... but Fukusaku is dead, and the only thing here properly honoring him is a Scrooge McDuck pile of PG-13 money that isn't actually going towards his name. I'm as through with Anchor Bay as I am ready to punch a baby in the face with pure, unbridled hatred for the world around me.

Don't count on XT Video's Phenomena BD. Their release of Profondo Rosso was pretty fucked up - in fact its pretty obvious that they just ripped the transfer found on the BU disc, played with the contrast and puked some nice DNR over it...

XT's City of the Living Dead Blu-Ray is quite laughable too, by the way, which is hardly surprising as it was made by Oliver "Mr. Astro" Krekel who is (in)famous for both being a gobshite and incredibly incompetent.

...well, balls. If that's the case I might just take that $40 and cram it all the way up my ass where Mr. Krekel can't get to it without a fight.

You wouldn't happen to have caps of the XT releases kicking around anywhere, would you?

I can only help you out with some side-by-side caps of XT's City of the Living Dead compared to the BU version.

You can find two different streams on the XT disc: No. 1 is unfiltered (but more than fucked up nonetheless!), the second one DNR'd to the max.

Just for the record: the DNR-butchered version is the "weltbeste Fassung" (best version world wide) according to Mr. Krekel. Pure German craftmanship!

... most of my fellow countrymen buy it just for the fancy packaging, anyway.

And, to be perfectly fair, Germany does get some of the coolest DVD boxes in Europe. I don't think a single cult movie in the last five years has had any less than a half-dozen different packages, with one of my most recent favorites being AFTER DEATH in a "3D Hartbox"... using key art from ZOMBI 3. I think I laughed so hard milk shot out my nose, and I was drinking Jolt at the time.

Still though, calling that an "improvement" over BU's flawless encode (of an already mediocre, noise-riddled HD source) is a bit of a stretch. What's really depressing is, technically speaking, he's got the right idea; all of those Italian BDs do have video noise, and thus DVNR is the only way to remove it after the fact. Of course, the far preferable way to fix it would be to do a new scan on better hardware and simply not create video noise in the first place... but hey, I'm asking for the moon at that point.

Holy fuck, BU's City of the Living Dead is a relative masterpiece. I don't hate it as much as others do, but seeing what the rest of the world has to offer so far, I'm very pleased with BU's.

...Which is a crying damn shame that something like that can be considered the best.

COTLD has always looked pretty gritty on home video, and I can only assume the root cause for it was the way it was shot - it's likely the ONLY film that was shot using Techniscope while simultaneously being matted to 1.85:1.

It's hard to explain without resorting to puctures, but imagine cutting a 35mm frame in half to make the image a spherical "scope" format, and then matting off 15% from either side. Essentially, inside of each 4-perf film frame (1.37:1) you have two smaller 1.85:1 images, with dead space on either side. That's basically what COTLD's negative looks like, and that's assuming they didn't have a lot of dead space on the top and bottom of each 2-perf frame.

Technically speaking it was shot on 35mm, but had Salvati shot the film on 16mm I doubt it would have looked much different. This is on top of Fulci and Salvati throwing a lot of naturally fuzzy, soft-focus into the mix, so... yeah. Not only was that negative a hazy, grainy mess to start with, but LVR did it no favors by scanning it on dated CRT hardware that only enhanced these properties.

A fresh scan on better hardware of even a new 2-perf IP would probably look a lot better, but why bother? Clearly, XT Video has proven they can make everything look better!