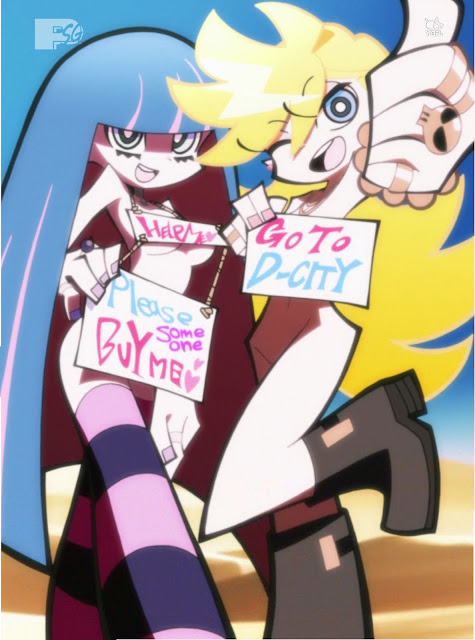 PANTY & STOCKING (With Garterbelt) was one of the most surprising and legitimately funny shows on Japanese TV I can remember appearing in the last few years. It took the aesthetic, timing and general raison d'etre of flat, ugly Cartoon Network shows and combined them with fetishized nose-picking,giant turd monsters and an episode that finally realized Johnen Vasquez' dream of  an entire episode in which the camera never once leaves the show's protagonists, who are sitting on their asses and doing nothing of consequence in their boring old living room. In short, the show was proof positive that Gainax still has something to give the world, and even if the blocky, flat art style makes your guts bunch up into your throat, you're doing yourself quite a disservice by not giving it a try.

FUNimation was all over that like fatties on free cake, and announced from the start that it would be a DVD+Blu-ray combo set, like... pretty much everything they've released in the last two or three years. They said that this was true as of three weeks ago, as well, but a troubling new turn of events has changed the likelyhood of that still being the case. Assuming the show gets released by the end of Summer, which FUNi had also said was their current plan.

Remember Sora no Otoshimono, the show about a pervy kid who gets a discarded cyborg angel with magical powers, and is mostly notable for the episode in which all panties come to life and fly away like flocks of birds? Anyway, the first series (released as "Heaven's Lost Property" in the English speaking world) was a typical FUNimation DVD + Blu-ray 'Combo' set, available with a shiny chipboard Artbox for the first press, and then in a regular ol' keepcase for the second pressing. The show's sequel/second season, Sora no Otoshimono Forte, was announced as a DVD + BD set... but the final release is DVD only. This is evidently a new policy from Kadokawa - one that hasn't been "officially" announced, just mentioned in passing after hours at conventions - in which no US release can include a Blu-ray if it's released during the same calendar year as the last volume of the Japanese BD sets. The rumblings suggest a 12 month grace period between the final Japanese Blu-ray single and the American box set, unless the American release is also released in hideously overpriced single discs... which, for those keeping score, American consumers, and yes, even the crazy anime people, gave up on the absolute second they were offered the "Complete Series" option.

Granted, Justin Sevakis' recent three-part article The Economy of Anime has pointed out, the money actually pulled in by the Japanese end on these bargain-priced North American box sets is a literal fraction of the money made by thise obscenely-expensive Japanese releases, and with Blu-ray having decided that Japan and the United States are officially in the same region, it's made the number crunchers at Kadokawa even more paranoid than usual that the Japanese fans will simply wait a few months for the US "Import" and spend a pittance to get, essentially, the same content. 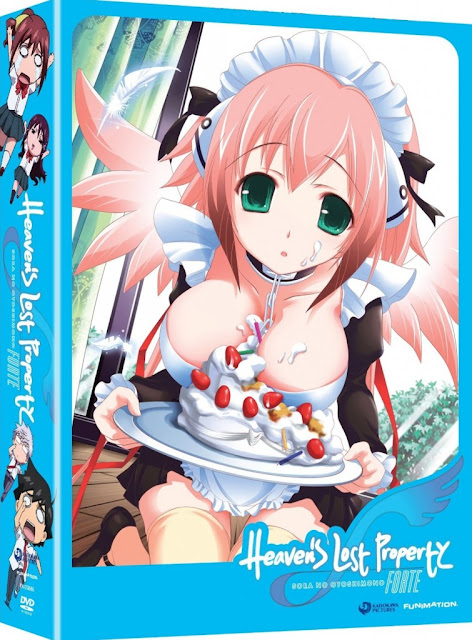 Yes, that's right: The DVD-only box is still, fucking, BLUE.
I swear, they do stuff like this just to piss me off...


Kadokawa can officially choke on a dick over this policy, but they aren't alone; despite FUNimation having previously negotiated with Toei for the "HD Rights" for One Piece S4, the plans have since been changed to be a DVD only release. Even at the full $70 MSRP (which, let's face it, neither you nor I have ever once paid) these US "complete" box sets typically sell for about 1/6th the retail price Japanese consumers pay for their half-dozen or so individual volumes, and as sales for home media continue to dwindle world wide as consumers march towards a combination of streaming and apathy and pirates decide that Very Good HD downloads are "good enough" when faced with the option of selling a kidney just to afford a second season of Strike Witches - and yes, that's over $450 the less-expensive re-release of 5 hours of content - it seems that at least some of Japan's most powerful licensors might finally be putting the breaks on what it considers an already next to worthless profit margin... keeping the North American market in check at least until they're sure they've squeezed their home audience for every last yen.

Maybe Panty & Stocking will be a DVD + BD Combo set. Or maybe we'll get a limited DVD followed by a Blu-ray in a less-fancy box several months down the line.  [UPDATE: It's official now - JP extras and an art box, yes. Blu-ray... no.] Now I do generally like FUNimation's chipboard Limited Edition box sets, but I can tell you right now that my interest in buying a show that already has an HD master has dropped to nothing; if the Japanese release was an upscale anyway or it's a title that hasn't had a new telecine made in 20 years anywhere in the world, I'll consider an SD release... it's not something I take lightly or enjoy doing, but I'll make the odd exception when I'm convinced it's the only legit home video release we're ever going to see before home video ceases to even be a thing. Waiting a year doesn't sound so awful, but every week that passes my interest and memory start to fade - I'm getting old, you see, always sore in places and cranky in the evening and requiring bran to poop regularly... the only upside to this is the fact that I only grow more patient as time goes on, and if that's how Kadokawa wants to play, hell, I'll play the waiting game...

Still, for a show like this that aired in 1080i and already has gorgeous Japanese 1080p Blu-ray release - the last of which comes out next month? Bitch, you must be trippin'. I'd rather spend $50 on a figure or an artbook than a DVD. It's not about the money, either - it's about the fact that I want to buy titles in the best quality possible, and buying a DVD when I can download a high quality Blu-ray rip is literally a waste to me.

Sorry FUNimation. I know this wasn't your bright idea, but going forward for you it's Blu-ray or the highway... maybe if Kadokawa sees the numbers on their DVD only sets drop hard and fast, they'll reconsider. Home media is a market we're already watching slowly march to its death, but the market for Blu-ray has steadily increased as the market for DVD has only gotten smaller, so this is like taking the very market's cane away and then giving it a good swift kick in the pills for good measure. When those two shifting paradigms finally meet in the middle, the notion of mass-market releases will essentially be over... but hey, don't worry too much about it. We'll all be there sooner than I think any of us realize.
at 10:16 PM

Thank you for posting this. Pretty much sums up how I feel about this specific situation, and the general stupidity of the Japanese anime business model in general. The more expensive they make their products, the less they are going to sell, until eventually no one except the hardcore lunatics are willing to shell out for anime. I feel bad for FUNimation - I think they've been smart about their releases and have priced things right, but they are at the mercy of the Japanese and their old ways of thinking.

What's a little troubling is that we're already at that point where only the hardest of the hardcore are supporting the home video release... then again, sales were kind fo like that from the very start of the OVA boom in the 1980s to start with. Piracy and merchandising has all had a big impact, but the general consensus is only a handful of people really want to own these shows anywhere in the world to start with!

Case in point: The first volume of Sora no Otoshimono Forte only sold a combined 2,767 copies on BD for the first volume, and as you can guess sales don't tend to go up from there. (Panty & Stocking sold even worse at 2,127 BDs sold at retail.)

By comparison OreImo's initial Blu-ray release sold over 28,000 copies, while Hyakka Ryouran Samurai Girls and Motto ToLove~Ru clocked in at roughly 6,500 each. A "Mainstream" title like Gundam might sell 50,000~70,000 copies, but some shows that don't get much attention from the otaku community literally sell hundreds of copies and never enter into four-digits per volume... when you factor all of that in, it's hard to fault producers for pointing at whatever happens to be popular and saying "More like this, please!"

Granted, who's to say the sales of tie-in Hug Pillows and Nendoroid figures didn't make the Sora no Otoshimono sequel a success in the long run? The producer behind the Ang Lee Hulk film admit that the box office take was a loss, but that they drove the sale of related merchandise of the big green lug so hard that it justified making a sequel anyway!

DVDs and books are the only products typically made available to Western consumers, but in Japan it's all part of a much bigger merchandising puzzle... that's part of the problem at hand, I think. But I'll get into that in a future brain-dump.

Thanks for reading, Demon.

What a shame. I was considering getting Heaven's Lost Property, but if the second season won't even be in HD, it kinda makes me not want to even buy the first. I can just watch it subbed for free on YouTube anyway.

If it helps sway you either way, the first season of SORA NO OTOSHIMONO: HEAVEN'S LOST PROPERTY was an upscale to start with.

I'd prefer it if Funimation and other companies didn't pack in BOTH the DVD and BD. Making you pay twice for something (and It'd be quite a while til I care tyo upgrade to BD). I heard that Funimation is stopping this policy.

Thanks for sharing information :)