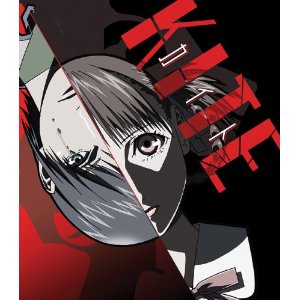 Recently the "Uncut" Blu-ray version of Yasuomi UMETSU's masterpiece, A-KITE/カイト, was removed completely from the RightStuf website. I had half assumed that was the end of it... but no, this tale of intrigue and horror is only getting started.

Media Blasters has seemingly abandoned all future Shriek Show releases (despite having solicited Emanuelle and the Last Cannibals and said that Zombi 3 and After Death were on their way), canceled* the second half of Bakuman, relinquished the rights to The Record of Lodoss War, and having already said that they would "be dubbing the rest of Queen's Blade", the announcement that Sentai Filmworks now owns the rights to Queen's Blade Rebellion suggests that CEO and public voice John Sirabella is finally so far out of his depth that he's spouting off nonsense that in no way reflects reality, instead of the usual incomprehensible mix of honest misunderstandings and bullshit half-truths.

It's with the following information firmly in mind that I'm going to repeat the following exchange from the Media Blasters facebook page:


Q: Has the uncut Blu-ray of Kite been cancelled, or just delayed? Also, is the Blu-ray an upscale or was it actually re-scanned in hi-def?


MB: Not cancelled at all. Just got the negative in from Japan. We are doing the transfer ourselves here in the states as they just felt in Japan not worth it for them.

Q: I pre-ordered the Kite Blu-Ray (which I assume will be the 45mins R-Rated cut). Umm...Can you guesstimate if I'm going to be getting this in the next month or so (amazon says it should be shipping in the next 4 days)?

MB: Good question. We will have the footage for the Uncut so we will release both versions. The one under AW is the cut one.

...is it possible to have a ragegasm? Ignoring the fact that they've completely ignored the "when" part of the latter question, the suggestion that Media Blasters literally owns the original camera negative turns my stomach.

On the one hand, this isn't all bad news. The last time Media Blasters did their own HD transfer from an actual 35mm print it was for Urotsukidoji: Legend of the Overfiend, and that was QUITE THE CLUSTERFUCK. Media Blasters had the seemingly legitimate excuse of having had to scrounge around for elements until all they could come up with was a battered and censored UK release print, which was about two steps removed from belonging in a dumpster behind 42nd Street circa 1981. If they do have the camera negative on hand, it'd be almost impossible to fuck up; there's no reason A-Kite wouldn't have been edited on film, sans the original credits+. If what Sirabella's said is true, that means all he has to do is pick a competent film lab and it's done.

But would the Japanese licensor really hand over the original negative? I'm honestly not certain. Green Bunny was the adult anime production wing of Happinet Pictures, a Japanese subsidiary of Bandai/Namco Holdings, and Happinet released the 2007 Premium Version of A-Kite and Umetsu's follow-up Mezzo Forte before quietly dumping most of their remaining porn off at Pink Pineapple's door to release as bargain bin titles... well, at least as bargain bin as Japanese adult animation tends to get. I don't doubt that Happinet sees little point in doing a new scan of a 12 year old title for Blu-ray when contemporary hits always sell dramatically better than "old" content, and if they're not willing to send the negative out to a film lab to start with, it isn't unthinkable that they made Sirabella a substantial offer to essentially be the new international licensor for the series - they're done with it, after all, and since John Sirabella literally paid out of pocket to have that incredibly disappointing Kite Liberator sequel made - a sad fact that makes me grin to this very day - I would imagine he had no complaints.

Media Blasters is best described as "inconsistent", pumping out fantastic HD transfers one minute and shitty SD upscales the next. The only constant has been that their releases have been phenomenal when they were handed a perfect HD master from the start. Titles like Crows Zero, Queen's Blade and Mazinkaizer SKL were all fantastic because they were basically just copies of the Japanese Blu-rays. Truth be told suspect they were actual 1:1 copies of the Japanese encodes with the English audio and subtitle options muxed in after the fact, and that's fine by me; if the results kick ass I could care less if you're skipping the middle man. When they have to scramble for transfers themselves, well... that's when you get shit like Versus, Zombie Holocaust and The Machine Girl (lulz). Occasionally they manage a competent release, like Devil Dog or their own Flesh for the Beast, but more often than not you get something like Burial Ground or fucking Urotsukidoji.

I'm sick of Media Blasters' very existance... but I do love A-Kite. Love the fuck right out of it. If Sirabella pockets my money for a new HD scan, so be it. I just don't want him to expect me to give it anything but a fair treatment.

* Well, officially, it's just "delayed indefinitely". From what I hear, DO NOT hold your breath on this one getting a complete US release..

+ On second thought, the credits being video generated does give me pause to wonder if this would have actually been an A/B roll affair - in which case we could, potentially, have yet another Burial Ground level clusterfuck of lost frames on our hands. Still, all we can do now is take a deep breath and wait...
at 12:04 AM

I honestly hope they don't fuck up the uncensored blu ray version. "Kite" is a masterpiece.

"We will have the footage for the Uncut so we will release both versions. The one under AW is the cut one."

Looking forward to this. Never seen A-Kite but it's one I've wanted to see for quite some time. If we can get the uncut version out and looking fine, that'd be killer.

MB have no production staff, a history of not paying their freelancers, and according to the New York State corporation registery, dissolved their incorporation in April...2011.

Take that as you will as to whether or not you'll see this street.

I have little doubt that Media Blasters is walking the razor's edge, and has been for some time... then again, I didn't expect to see Squid Girl, Crows Zero or Riki-Oh: The Story of Ricky to come out on Blu-ray either, yet we've gotten them all the same, for better or worse.

We may see them close down operations before A-Kite comes out, and honestly... I'd probably get over it. Because at LEAST it leaves us with the possibility that someone else will pry the negative from the company's cold fingers.

Is there anything of note about the edited version (added scenes?), or should I just stick to getting the Kitty Media release if that comes out?

Kentai - How are you getting in contact with media blasters? I've been looking for an email address the past few months but can't find one anywhere. I want to find out what the deal is with these phantom shriek show releases....

Kriztoffer: Any special footage included on the USA cut? Nah, it's literally just the "Uncut" version with all of the X-rated content removed, a post-coitus scene zoomed in to obscure nudity, and the credits removed between episodes so that it plays as a single movie.

The so-called "INTERNATIONAL VERSION: DIRECTOR'S EDIT" is still episodic, and contains one or two alternate cuts - nothing to get excited over mind you, it's just a couple static shots to smooth over the cuts to remove the hardcore bits without the soundtrack skipping quite as badly as they did before. It also restores some of the rape footage, making the whole thing a bit less... incomprehensible, I guess.

Tommy: Media Blasters uses Facebook. I got some eMail assistance ages ago, but that was some time before they laid off 60% of their staff, so... yeah. Poke 'em on the FB, see what they say about AFTER DEATH and ZOMBI 3 - the worst they can do is ignore you, right?

They certainly ignored my inquiry about their Warlock Moon DVD being broken, heh. Tried to see if I could get a replacement, but I guess competency is expecting too much of MB.

thanks kentai. will do. i'll let you know if i find anything out.

So Media Blasters are ignoring me on facebook, but it seems there is finally a reason revealed for all the delays and cancellations. Apparently, the company was shut down by the Secretary of State for non payment of back taxes since 2009. They claim to be still in business and working it out, but who the hell really knows. Apparently, they are asking all their employees (that are still left) to remain on staff on a freelance basis. Idk...sounds like mess to me. We'll see...

Looks like MB messed up the aspect ratio again, Amazon stated that the Kite BD will have an aspect ratio of 1.85:1 !!!!