I Warned You Not To Remake It Tonight 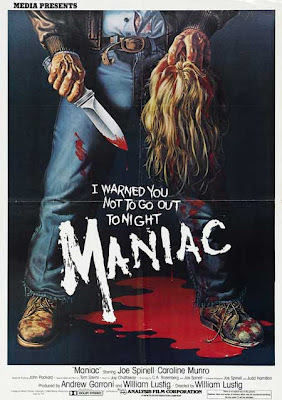 Can't post an embed of this one, at least not without more google-fu than I'm in the mood to do right now, so... just go HERE and watch the Cannes Trailer... thing. Don't misunderstand, I thought Mr. Wood was fine playing the destitute tragic hero in a certain trilogy from about ten years ago nobody probably remembers - wasn't it something about, like, Jewelry? I don't even know anymore - but let's just cut the crap and ask the obvious question:

What the fuck is going on here? Are they seriously making a glossy remake of Bill Lustig's best goddamn picture with Elijah Wood? And it's being written by Alexandre Aja, but directed by his pal Franck Khalfoun, the guy who made P2? P-goddamn-2?! Christ, that minimalist thriller was okay, but this is like handing the keys to a blimp packed with nitroglycerin to a guy who only once successfully parallel parked a Geo! Who the hell thought this was a good idea? And WHY?

If you've never seen the 1980 Bill Lustig directed MANIAC - and you really, really should - Joe Spinell is one of those rare, once-in-a-lifetime performances that just works on every important level. With all due respect, he's not an overly attractive man. He doesn't play a demented genius or a sexy, ironic version of a sociopath written for people who only wish they had the balls to slit the throats of the endless sea of self-obsessed morons around them. No, Spinell's performance is as raw and real as it gets. His menacing body language during the gross-out kill scenes are terrifying and larger than life, but that exciting bravado is almost immediately undercut by seeing his home life. This isn't Hannibal going home to have a fine glass or wine, or Dexter finding a new hiding place for his minimalist, almost quaint trophies; Frank Zito lives in squalor, he talks to himself as if his "dolls" were people, and he shrinks like a terrified child as he relives the events that broke his psyche and left him a shell to which the words "right" and "wrong" were utterly meaningless. There's nothing savvy or cool to be found in Frank Zito, he doesn't even wear a mask to carry out his crimes, turning him into a faceless avatar of vengeance; he's just a gross, mean bastard who kills women so he feels less vulnerable over his deep-seated mommy issues.

Frank Zito is THE DEFINITION of a cinematic monster, because he only reflects the horrors of the world we live in today - despite not having been based directly on any real serial killers, he's likely the most believable repeat violent offender we've ever had on the silver screen. He's a a wretched piece of human garbage, and the only guy who probably did it better was Michael Rooker in Henry... but that's another discussion we should probably have someday.

While I wouldn't suggest that the Lustig film was flawless, Maniac was still a legitimate masterpiece of the New York underground, particularly when compared to the oft-entertaining but less substantial experiments of the period, like Basket Case and Driller Killer. So much of that film's power hinged on Spinell that even suggesting it could be done better raises something in me that's a little like a scoff and a little like vomit. Even Bill Lustig himself suggested Tom Sizemore -  you know, a big meaty guy who only doesn't look like Marv in Sin City because Mickey Rourke kinda is Marv... or, at least he became Marv after he decided to prove his critics who said he was a talentless pretty boy wrong and destroyed his entire face in the boxing ring. No, I'm not certain why "Boxing" = "Great Actor" either, but at least once Rourke lost his good looks he proved he was still a force to be reckoned with... he just had to be beaten to a pulp so hard that he literally became a Frank Miller drawing to do it. THAT'S what you call method acting.

But speaking of Sin City alumni the problem here isn't that Elijah Wood is a terrible actor; the problem is that he's, well... he's just so damned dreamy. 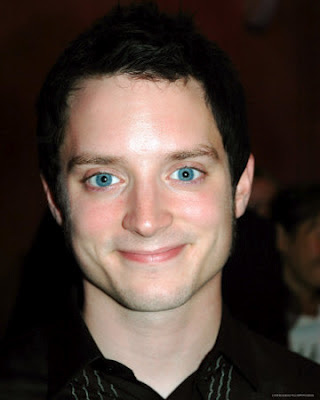 For those in that seemingly omnipresent "straight male" horror demographic who may not be comfortable deciding these things on their own, Wood is - according to Mrs. Kentai, anyway - what the ladies, homosexuals, and anyone else who doesn't require something have a vagina to be inertly attractive tend to call 'adorable'. He also looks about as dangerous as one of those squishy rubber Pokemon looking night-light toys they sell at Ikea - and, no, none of the publicity photos that have leaked from the set of Maniac 2012 have convinced me he's going to suddenly remake himself as the cool, edgy personality that can pull this role off. Yes, I've seen him sneering and covered in blood and all that, I just don't buy it.

"But what about Sin City, Kentai?" you may or may not be asking aloud to your computer screen like a madman. "He was creepy as hell in that!" True enough, but he wasn't acting in that; he literally put on a pair of glasses and stared into the camera for three minutes while Robert Rodriguez tweaked the digital background and lighting to make him look like Bela Lugosi. His role in Sin City was to be an ironically handsome and morally grounded avatar of Death, not to actually bring a complex and morally repulsive character to life. His role could have been performed by a cardboard cutout and it would have been pretty similar. That's not really a shit I'm trying to take on Wood himself, either - that's just what the role was. Not every character has the depth of Citizen Kane or the selflessness of the Bad Lieutenant*, and that's fine. He was paid to look cool, he did it, that was the end of it. It just doesn't "prove" anything from a performance standpoint.

You know, the more I think about it, the more I wonder if Wood wanted a project like this specifically to prove he can be something other than a sadsack wandering through life in a dreary daze? Hollywood hasn't given him much to do in the last decade but play cartoon characters and, for some reason, play second banana to a guy in a dog suit, so maybe this will be the challenge he needs to prove he's more than a pretty face? For his sake, and for whatever goodwill Lustig's original still has, I hope Wood's right. Despite my current state, I'm not going to dismiss an entire feature length film based on part of an early promotional trailer, I just... ugh, I dunno. Call me a cynic, but I just don't like what I am seeing.

And I'm not trying to harp on "remakes" because, you know, fucking remakes. John Carpenter's The Thing and David Cronenberg's The Fly, easily two of the greatest horror films of the last 30 years, were both remakes. Both Brian DePalma's Scarface, and Martin Scorcese's The Departed were remakes... kind of, I guess? I know everyone has a boner for Darren Aronofsky's Black Swan, but I couldn't get over the fact that the whole story and structure was a beat-for-beat copy of Satoshi Kon's Perfect Blue, a film he personally bought the remake-rights to because he wanted to rip his favorite scenes out of it for OTHER movies, and figured that was the best way to not get sued for it. Albert Pyun's... let's call it "compromised" version of Captain America was usurped in every way by the recent 3D Hollywood blockbuster, and heck, we got a reboot of The Incredible Hulk, what, five years after Ang Lee did his thing with it? It's totally possible to improve on a film the second time around, as long as you have something new or better to offer. There are also remakes-that-really-aren't like Inglourious Basterds and Django, but... well, let's not go there for now.

Sometimes, there is a good reason to do a film a second time, either because the technology has gotten better or the performances didn't gel like they should have or because the director simply did not understand the material. Heck, sometimes you luck out and BOTH versions are great! But, well, sometimes you get Gus Van Sant's utter worthless color rehash of Psycho. Or Tim Burton's head-scratching "reimagining" of Planet of the Apes. Or that shitty TV version of The Shining that pleased Stephen King and absolutely nobody else. (Seriously King, fuck you, Kubrick kicked your ass on this one.) Or Nick Cage punching women in a bear suit - I shit you not, that happened - in The Wicker Man. Or the Platinum Dunes reboot of literally everything they touch. If you have a good reason to approach the material a second time, or from a new angle, by all means do it. I don't honestly know what the staff behind the Maniac remake think they can bring to the table that Lustig didn't 30 years ago, but it better be something pretty goddamn interesting is all I'm saying.

And just so we're clear, being handsome unto itself isn't a deal breaker for a horror villain; Christian Bale is a very sexy man, but he's also batshit insane. I don't mean "he plays crazy roles well" either, I mean he is, quite literally, out of his fucking mind. Starring in movies where he gets to play a millionaire who dressed up in a cape and punches gangsters in the pills, not to mention got his career kick started by playing an almost tragically hip 80s asshole who murders people specifically to be cool, is probably the only reason he isn't a real life serial killer yet. Oh well, at least it's not like they're also remaking America Psyc-

Silly me, I almost forgot. When are we going to see a trailer for THAT needless do-over, exactly? Seriously, how is it that the remake pissing me off the least so far in 2012 THE GREAT GATSBY 3D by Baz Luhrmann? No, really, by the Romeo + Juliet asshole. How is that even possible?

*That's Harvey Keitel's Bad Lieutenant, of course, With all due respect to Nick Cage and Werner Herzog, I absolutely hated that not-funny cop parody. Just hated it. Would I have liked it better if it were just called "Port of Call: New Orleans" and didn't make me think of Keitel's naked, sobbing, utterly jaw-dropping performance as the most self-loathing embodiment of addiction I've ever seen? Well... maybe. But you didn't. Somehow, watching Nick Cage smoke crack and poke imaginary lizards isn't nearly as fun as you think it is anyway.
at 11:52 PM

Elijah Wood is a a bit too much of a hairless nymph for this homosexual to consider dreamy (or even sexy)... but that is simply personal preference. What is less subjective is the fact that he won't be able to touch Spinell's skin-crawling performance BECAUSE he's such a precious nymph that so many fawn over.

I can't even believe this story. Ridiculous. I actually scanned back up to the top of the article to make sure that this wasn't posted on April 1st.