Something to Shout About 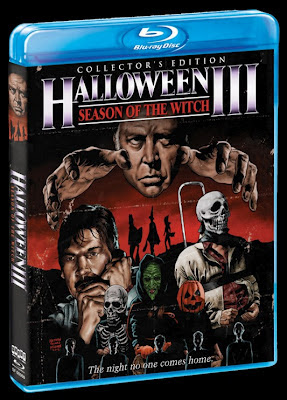 Shout Factory has released a wide variety of typically older movies and TV shows that fans of the eclectic probably know all too well. They've been no strangers to horror and cult arena, having released the first legitimate HD print of a Takashi Miike film with Audition, as well as having finally saved Rocko's Modern Life from a lifetime in the 21st century of short, broadcast-cribbed Youtube clips. And before you fear that a line like this will slip into obscurity before they're out of the gate, they aren't stupid; they're raking in all sorts of sweet, sweet Brony money by being the distributor for a number of current TV shows, including My Little Pony: Friendship is Magic. Still, their track record is long and surprisingly stable, so it's without hesitation that I'm excited to see them having thrown down the gauntlet and created "Scream Factory", a new sub-label focusing on producing special edition BD/DVD presentations of cult horror films. Their inaugural release is a one-two punch including a bonus-features laiden special edition of Halloween II ('81) and Halloween III: Season of the Witch, with Terror Train being the next title in line. Also announced were new DVD/BD editions for Tobe Hooper's The Funhouse, Wes Craven's Deadly Premonition, Death Valley, and the two titles I'm most excited to pick up personally: Don Coscarelli's Phantasm 2 and John Carpenter's They Live!

This is one big pleasant surprise* as some of these titles have never even had a proper R1 DVD release. Also of note is that every title will contain a host of all-new bonus features, and in the case of Halloween 2, that includes a second DVD with the rarely seen "TV Version" in its entirety. I've always loved seeing completely alternate cuts of a film included when they were substantially different, and as the TV master was made by speeding up footage and re-dubbing lines left and right, including a host of "Deleted Scenes" - as Universal did on their release last year - is only half the masochistic fun. Word is they can't get the Carpenter/Piper commentary for They Live!, which is a damned shame, but I have little doubt they'll either record a new one themselves or come up with something just as satisfying. Better yet, while I think the three faux-vintage covers Scream Factory have come up with are pretty fun in their own right, every single release promises a reversible cover with the original poster are on the B-Side.

While their Audition Blu-ray transfer was, sadly, not very impressive, it's pretty well established that the elements for that film have never been very good to start with. Yes, it could have looked substantially better, but somehow I find myself hard-pressed to get too upset knowing the original negative still exists and they were flatly refused access to it. They scanned an Internegative made for international distribution and then said, "There, done." Odds are most of these films have their negatives readily available, and as major studios like Paramount and Universal would likely be doing all of the transfer work, I have little doubt that we'll get some stunning looking presentations out of the deal... and if not, you bet your ass I'll be one of the first to let you know about it.

If you needed any more incentive to pick it up, ordering HALLOWEEN II from Shout Factory's site nets you a Haddonfield Memorial Hospital nurse's cap, while for SEASON OF THE WITCH you get a poster with their newly-commissioned cover artwork. A clever little incentive to get fans to give the distributor as much for these titles as they can, but as Amazon already has those two up for $20 a piece, these neat little paper goods (limited to "Less Than 500" each) just aren't enough to get me to go balls deep at MSRP-plus sales tax and shipping.
at 7:38 PM

But the most boner-worthy release news I've heard all year:

Tetsuo I and II from OCNs supervised by Tsukamoto with Denchu Kozo no boken provided as an extra.

ELECTRIC ROD BOY will be included as an extra? That is awesome! Wonder if it'll be in HD, too?

Also, what the hell IFC? I think BULLETMAN has been on Netflix for the better part of a year, yet there's still no Blu-ray in sight.

Not to mention Third Window Films are also releasing the latest films from Tsukamoto (Kotoko) & Sion Sono (Himizu), along with a BD of Love Exposure (new transfer!), and Ishii Sogo's new film 'Isn't Anyone Alive?'.
They might be having big trouble with theatrical distribution, but definitely have some great things coming up on home video.

oh, and yes, very much looking forward to Shout!'s BD's of Phantasm II and They Live.
Fingers crossed Prince of Darkness follows. Unlike Arrow, who they seem to be taking a cue from with the cover art, Shout! Factory seem to know what they're doing when it comes to the film's transfer

I imported the Bullet Man Japanese Blu-ray long ago. Wasn't cheap, but I'm glad I did it.

Asked Third Window about the Tetsuo set and they told me it'll be Region B-locked. :( That'll be the title that makes me get a region-free player.

And Denchu Kozo will sadly be SD. The dude I asked about it said that it won't look very hot since there's no good looking version for them to source from, but it will be NTSC, he claims.

I doubt it could look any worse than the transfer on the Italian RaroVideo DVD, but who knows?

But dammit, I was hoping I wouldn't have to buy a new BD player to see this.

Adam: Love the ending to PRINCE OF DARKNESS, but always thought the rest of the film was kind of... well, I'd be all too happy to revisit it on Blu-ray, even if I walked away thinking that it wasn't nearly as great as any movie with Alice Cooper impaling a dude with a Huffy bicycle ought to have been.

Kriztoffer: A shame that the short film will be sourced from what's likely an old analog tape, but heck, at least they aren't releasing it as a separate full-priced DVD or anything...

I'll have to keep an eye on Third Window. I've tried to avoid "Region B" discs in general, since not having a hacked stand-alone is a big pain in the arse that either entails watching it on my PC every time or backing up a 1:1 region-free copy, but if the UK wants to corner the market on Sono and Tsukamoto (and they don't totally suck), they've got my support!