Sentai Filmworks, the phoenix that rose from the ashes of ADV what seems like a minor-eternity ago, has announced that they're releasing PERSONA 4: THE ANIMATION on DVD and Blu-ray September 18th to coincide with the US release both of the P4A: PERSONA 4 ARENA fighting game and the P4G: PERSONA 4 GOLDEN PS VITA remake. That's the good news... 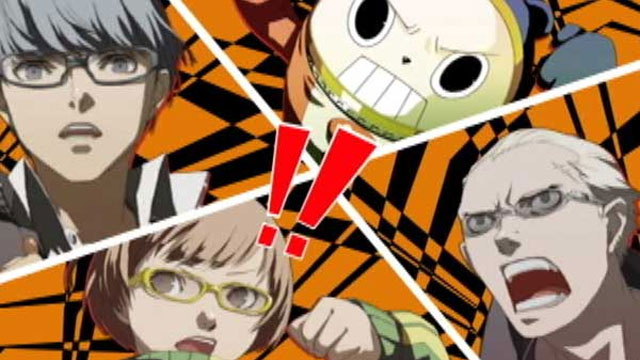 The bad news is that while the DVD will be a fairly standard bi-lingual release featuring both a new English dub and the original Japanese dialog with English subtitles, the Blu-ray will only feature the English dub. This is the same bullshit tactic that was used for Bandai Entertainment's release of Kurokami. Remember that show? No you don't! Nobody does, don't lie to me like that...

The reasoning behind this absurd release is obvious enough: The Japanese release, which retails for about $900, gets its last of 10 Blu-ray volumes on the 22nd of this month. Sentai's first volume containing half the entire series 4 weeks later. Sentai's original MSRP was $70, or less than 1/6th the cost of the Japanese release. Aniplex sees a bargain priced "Region A" import release as a threat to their insanely expensive local alternative, and likely offered Sentai Filmworks the following four choices, each increasingly shitty in its own unique and sad way:

Only release the show on DVD and waive Blu-ray rights completely.

Release the Blu-ray dub only for typical US pricing now.

Release the Blu-ray bilingual for typical US pricing AT LEAST a year later.


Never having delved into the Persona franchise proper*, I can't say this particular release upsets me as a fan... but it does worry me as a consumer. We've seen "forced" English subtitles on several releases, and while slightly annoying in the scheme of things, I don't really mind much. Dub-only, though? That's just brutal.

Like I've said, I was never going to be first in line to pick up PERSONA 4 anyway, so maybe my stance here is irrelevant. But you bet your ass I'll be the first to say that I'll not support an anime Blu-ray that's been stripped of its original language.

* I own the PSP remake of PERSONA 3, so I'm not totally disinterested. Just distracted by a hundred other things.
at 6:05 PM

I got a completely topic-unrelated question for you: Oliver Krekel (Astro Filmworks) insisted that "all PAL and NTSC masters on Digibeta are interlaced, get scanned interlaced and DVD is an interlaced medium" (sic!). I think that's complete and utter bullshit, but I'm an amateur in this field. Could you bring some light into the darkness?

I sure can, stranger!

Basically, most PAL DVDs can be watched with deinterlacing set to "Weave" (ie: there's no actual deinterlacing going on) and the content will still look progressive. That's because each scan-line is a half a frame, so playing both scan lines at the same time equals one progressive frame. So in theory, the actual frames of most PAL DVDs *ARE* progressive... so where's the rub come to haunt us?

The major problem is that the MPEG encoder is told that the content is still interlaced, and that means a lot of players will try to blend the fields back together instead of passing them through untouched. Even some earlier PAL DVD players marketed as progressive players can't figure out how to properly weave a goddamn PAL disc back together!

And while this isn't a universal issue, plenty of encoders will filter progressive content to try and hide the presence of scan-lines on PAL interlaced TVs. A progressive encode will also do things like block-ordering differently... basically, the encoder treats interlaced material differently by its very nature, and while that SHOULDN'T affect quality, it still can.

There's also some PAL material that really *IS* interlaced! Some TV shows are shot where each field is a differnet image, and plenty of otherwise progressive PAL material might have video-generated credits or transitions that would show obvious interlacing with your hardware weaving it back together as-is. In short, the only way to tell if the PAL content (if not the encode itself) is progressive or interlaced is to watch through it... but the master is always interlaced, and virtually all PAL encodes are flagged as interlaced, too.

If you'd like me to explain NTSC, it's actually even more complicated... but hey, it's been a good long while since I've written a tech-sheet that wasn't to a client. Lemme know if you're interested. ^_~

* Well, I suppose there ARE "Progressive NTSC Digibeta"... but they don't actually play in standard Digibeta decks, and are so rare they're worth mentioning mostly as the esception that proves the rule.