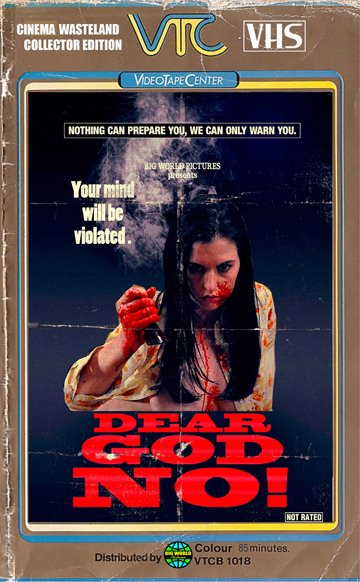 I don't get a dime for posting this, I just want the whole world to know:
DEAR GOD NO! DVD / BD-R COMBO PACK

How the fuck did I not know this existed?! Not the film itself  - THE TRAILER for this Grindhouse throwback extravaganza had me at "Bloodthirsty Bigfoot" - but the fact that there was an actual Blu-ray release kicking around?

Apparently there was a "Limited to 250 Copies" run on Blu-ray starting back in April using the "original" group-shot poster art, but the stock has been depleted completely since The above release appears to be the mass-manufactured DVD, plus a second run of BD-R copies. Just like the prior Limited Edition each and every copy was signed and numbered by director James Brickert, which makes the fact that you're paying roughly an extra ten bucks to watch the film in High Definition a goddamn bargain if you ask me. And yes, for reasons I won't get into, yes, I can confirm that the movie was shot on Super16 and mastered in High Definition, though all of the battered reel changes are digital fakes.

There's also a bunch of retro VHS releases - like, actual NTSC tapes - but don't buy those. Please? I mean fine, if you want a VHS and a Blu-ray, I get it, but just let tapes die already...
at 2:37 AM

I had to make sure the director of this wasn't responsible for any of Chillerama. That steaming fuckpile pissed me off to no end.

I'm not sure how much more of this "grindhouse" resurgence I can take, but it has delivered some good kicks. Father's Day and Modus Operandi are probably the best "neusploitation" flicks I've seen. Well, the former only partially tries to pay homage to that; it's its own twisted affair. Really, truly a great, fantastic movie. My boner for Astron-6 is so hard right now. Just hope they can get their final edit on Blu-ray before long. I swear these guys could become like the Monty Python of sleaze movies.

Well...I'm gonna take a flying leap with Dear God No!—and if it sucks or pisses me off, I'm coming to maim you, Kentai. Looks like the poster art was done by The Dude Designs, and I like all his shit so far and the movies he did posters to, so I hope that can be taken as a reliable endorsement. I'd take your word for it being good, too, except it's unclear whether you've actually seen it yet.

Question is...go for the first Blu-ray release, or the combo pack? I really like the poster art enough to spring for that, but maybe the second release has reversible cover art...?

VanBebber, man... Deadbeat at Dawn is a masterpiece, and it's too bad Chunk Blower never got finished. Dark Sky could have at least put the trailer on that VanBebber box set a few years back...

And, the eBay seller just convinced me on the combo pack; the DVD has extras exclusive to it, and it also comes with a card of the Dude Designs poster art plus two stickers. Woo!