Gettin' My Green On

Let's make this official: Going forward, under no circumstances will I talk, at length anyway, about a Blu-ray disc I don't have in front of me so that I can reference it. It's not fair to me only getting glimpses of the product I'm so eager to dig my teeth into, and it's not fair to the producers behind it for me to get a potentially fragmented impression of their work. It's just bad all 'round for everyone, so I'm going to try and be good and not talk about the transfers and audio mixes until I've got myself a copy. Mind you, if a release is cut, framed completely wrong or unquestionably FUCKED UP, I'll let you guys know without a moment's notice (like THE DEADLY SPAWN last time), but bitching about a transfer before I can do a proper dissection? Nah, I'm done with that shit.

So! About that Image BD release of RE-ANIMATOR... 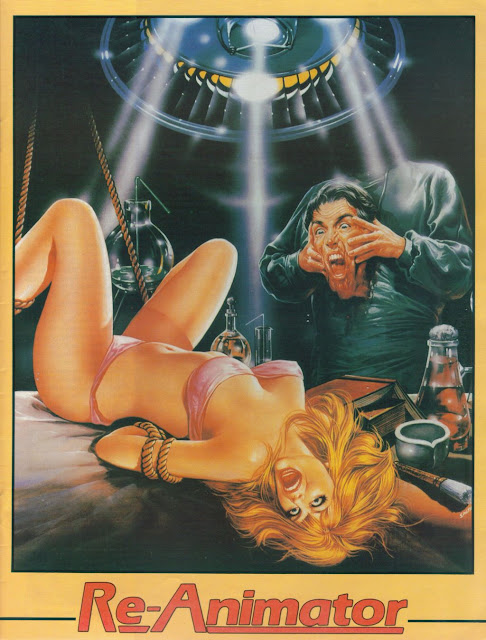 Where the fuck is this amazing art from, anyway?

Yes, I've now officially bought a copy of Image's new Blu-ray... much to my initial chagrin. Apparently the film was shown on MONSTERS HD, a now-defunct satellite station around 2005. I was never in a position to get dish up until very recently, so my overall interest in 1080i broadcasts was marginal at best, and this particular snippet of info had gone below my radar completely. With this in mind, why Anchor Bay chose to recycle the Millennium Edition SD materials for the "Anchor Bay Collection" DVD in 2007 when Brian Yuzna already had a newer HD master is a confusing turn of events indeed, but the fact that they didn't lean towards using a new source is a big part of why I assumed there hadn't even been a new source since Elite pulled the film out of the vault for their 16:9 master in 2002... seriously, who the fuck goes back to a Digibeta when you have an HDCAM SR tape right there at your fingertips?

I guess all I can do is take this one on the chin; Re-Animator was, according to sources who have spoken directly with Brian Yuzna in the past year, sourced from a "real" HD master. No upscaling here, despite my initial bitterness. I should have waited to flip my shit until I could dissect the whole disc, and yes, perhaps if I had done that, I may not have come to that conclusion to start with.

That said, Image Entertainment's Blu-ray press materials claimed that this was "A BRAND NEW 1080p TRANSFER APPROVED BY PRODUCER BRIAN YUZNA." As we've established, this master was first shown at least seven years ago. I don't think there's a statute of limitations as to how old a video source can be before calling it "New" is strictly bullshit, but I'm pretty sure this one's expired harder than year old milk.

Having finally seen the disc itself, I'll relent and say that is is marginally better than screenshots would suggest, with a fairly consistent coating of grain on lighter areas and improved close-up details, particularly those of David Gale's dreamy mile-long stares:


Does it look better than the 10 year old DVD? Absolutely. Am I glad I can give my DVD away and not feel the slightest pang of hesitation? You bet! Does it look as good as I expected when being promised a "New, Producer Approved HD Master"? Not for a goddamn second. I'm going out of my damned way to find a static shot of an extreme close-up to give the Blu-ray every chance it can possibly have of clobbering the DVD, and in the end all I can do is shrug and nod that, yeah, I see the difference... it's not anything to get excited about, but after being reminded of what The Average Fuck-Upscale looks like, sure, I'll take this in a heartbeat.


That said, a modest increase in resolution and more natural flesh tones are about all there is to get excited about. For one thing, the entire disc has obvious halos along horizontal planes, which makes me think it's been the victim of some pretty harsh low-pass filtering, something I thought we had generally moved well past as a species:

"WATCH OUT! Those bags are all equipped
with edge-detecting forcefields!"


For another, grain looks natural enough on brightly lit scenes, but has an uncomfortably noisy look during the darker scenes. This is likely the result of an older, CRT based film scan, and while I know some people like the coarser, "grainier" look that this produces I can't say I'm one of them. Still, I'll begrudgingly take this over the same master plus some DVNR smearing...

Well, it's still not as bad as DJANGO.


There's also rampant black and white spots that vary in both size and intensity from start to finish. You can't find a single minute that doesn't have some sort of film artifact. Unlike the other two complaints above, I'm not entirely sold on this one way or another; obviously the fix for this can go very, horribly wrong, and I don't mind some of that "sparkle" (and Spielberg loves to call it) peeking through, but if nothing else it proves that Image did absolutely zero work on the source they were given.  At first I thought that the Blu-ray actually had more dirt than the Elite DVD, but having compared the two side-by-side, I think that the general boost in clarity and lack of obvious DVNR on the HD masters just makes the gnarliness of the IP that much more obvious.

The scratches are coming, Barbara...

The Anchor Bay Collection DVD from 2006 actually incorporated some automated digital scratch repair, and while not perfect, it means that this is NOT, technically, the cleanest presentation the film has ever had on home video... and that's kinda fucked up.


So hey, I was wrong: RE-ANIMATOR is no upscale, and the Blu-ray is worth the $12 you should actually pay for it, particularly if - like me! - you didn't have the Anchor Bay retrospective already. That said, it's barely the "new and improved" master Image was promising, and it's nowhere near as good as this fantastic cult movie actually deserves. The negative hasn't been touched in over a decade now, and while I have little doubt that a film made in 1985 for less than a million dollars will always look pretty rough around the edges, we've still got a good long way to go before anyone who actually respects this film is going to treat it right... assuming they ever do, of course.

Don May was angling to make this a Synapse release, but for whatever reason, Brian Yuzna took his business elsewhere. I'm sure he didn't make that decision lightly, but even so... Brian, just in case you're listening, please, reconsider Don's offer next time? You got my cash for this one and God knows you'll get it each and every time you release another Gordon picture, but I'll be more apt to suggest friends buy their own copies if you do a good job instead of just giving them my old hand-me-downs.

Hopefully I'll be able to tell y'all how TEXAS CHAINSAW MASSACRE 2 looks soon. 'Till then!
at 10:04 PM

Damn disappointed in this one, especially knowing Don May offered to do a new scan and that. Still, with its better color and marginal detail increase over the old Elite DVD, I may get this cheaply (though more likely under $10) after I see what other labels do with the movie. If there's a chance of something better being done, I'll hold out a while.

Or I may just stick to my DVD and use the scratch for something better. We'll see.

And holy balls I love that poster art.

I have little doubt that Second Sight will do something special in the UK... but I'm impatient. Barbara Crampton mentioned recording some new material in the last few months, so someone out there is planning new special features.

That said, anyone who ISN'T satisfied with two commentaries, a feature length retrospective, deleted scenes, half a dozen stand alone interviews and original trailers has way too much time on their hands to spend watching documentaries about Re-Animator. I fuck'n LOVE this movie, but honestly, what more could there possibly be to say this late in the game?

I'd be satisfied with Barbara Crampton giving a picture-in-picture commentary whilst naked.

What are the chances of the Second Sight release being Region B-locked?


By the way, have you any thoughts on The Devil's Carnival? I quite enjoyed the filmmakers' previous work, Repo! The Genetic Opera, and my music idol Nivek Ogre is in this one as well, but the limited (6,660) Blu-ray is $40 plus tax and shipping, and for a 65-minute film I haven't seen, I just don't know whether I can go for it. Just wondering if you've seen it or heard any word that it's good.

I guess it's getting a wider release through Hot Topic, but that's DVD-only.