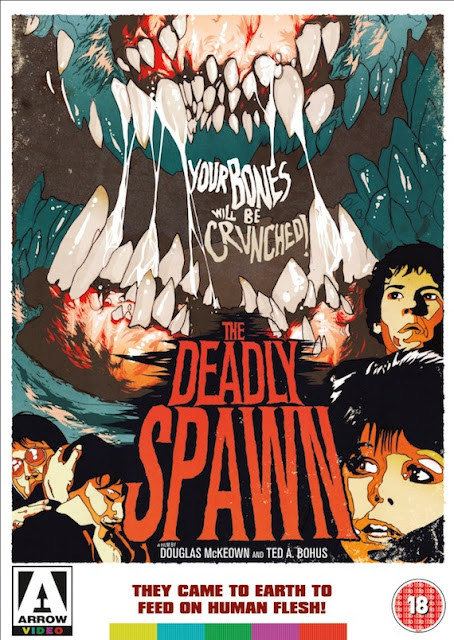 Remember how the so-called "Millennium Edition" Blu-ray release of THE DEADLY SPAWN that came out back in February was The Worst Fucking Cult Blu-ray Release Ever? Without a hint of possible exaggeration, it was literally a 1080i upscale with sloppy DVNR of the SD Digibeta master that Synapse Films created for the film's 2004 DVD release.

Shortly thereafter, the film's producer Ted Bahus appeared under the screen name "spxted" on the Blu-ray.com forum, initially arguing that his product had made plenty of fans of the film happy, but changed his tune a few weeks later promising "big news" regarding the title.

Screenshots were posted, and working "from the negative" was spoken of. Bahus promised that this time shall be different! An exchange program was held, and yet, somehow, we got ALMOST EXACTLY THE SAME GODDAMN THING. Mind you it's a less processed, mostly-progressive upscale this time, but... that's kind of like getting a giant turd in your sandwich, asking that they make you a new one, and getting the same sandwich with the turd having been wiped off with a napkin. You're still eating a turd sandwich. There's just slightly less turd involved the second time around.

He's defended this borderline hilarious rape of fan dollars, and as far as I'm concerned Mr. Bahus can eat a big ol' bag of dick. If he'd been honest and said "Uh, I'm poor. Take an upscale or leave it." I'd shrug it off and think he was an inconsequential asshole, but to publicly lie about doing a new transfer for a silly film that people love the crap out of? That's not cool, man. That's not cool at all.

If you still want to own this movie, buy the Synapse DVD, for crying out loud...
at 9:34 PM

That is very uprofessional behaviour. It is not wise to trick your customers.