As much as I abhorrer all forms of censorship and cowardice in the pursuit of the all mighty dollar, Steam's online gaming service (or more specifically, the "Greenlit" indie spotlight portion thereof) making nerd-culture headlines last month for banning the borderline pornographic Seduce Me left me with little more than a sigh and a shrug. Yes, any service that takes money from a stranger's credit card should assume that the card holder is 18, and thus independantly capable of deciding that a dialog-driven strategy game about sport fucking is the right use of their disposable income. Then I remind myself that it was essentially a Jersey Shore Dating Simulator that looked like this... 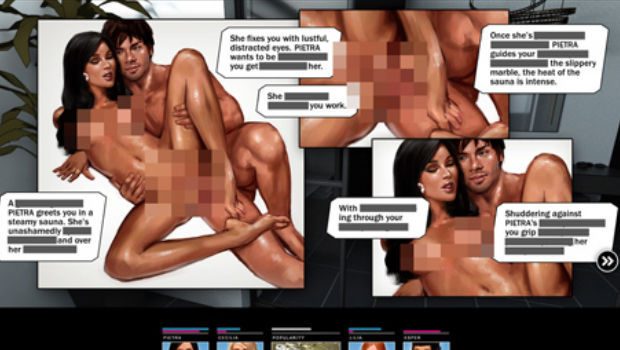 You can almost taste the herpes.


So, clearly, nothing of value was lost. It has every right to exist, and it's not as if the developers can't publish it themselves in some other, less assuredly high-profile manner, but I mostly feel that Steam has every right to tell them to shove their porn game without being especially hypocritical. Yeah, yeah, everyone and their retarded potbellied pig has bitched that Witcher 2 and Mass Effect 3 are available via Steam, softcore hump-scenes included, but the isolated images in a hundred hours of melee grinding RPG is a bit like comparing the brief penetration found in I Stand Alone or Short Bus to Jenna Jameson's Wicked and The Best Of Blackzilla. It really isn't the same thing, and I can understand why a service would be into one and not the other, even if, at the end of the day, they all feature genitals mashing into other genitals.


That said, Steam has my attention once more:

Movies will be eating up my next couple paychecks, but the game with soundtrack costing less than fifteen bucks sounds like way too good a deal to pass up. Can't speak for the gameplay yet, but it's a goddamn side-scrolling Lovecraftian version of Mad World... how can this not be awesome?
at 9:36 PM

Thank you for sharing the information, may be useful for everything .. Greetings